The Art of Shaving in Palm Desert 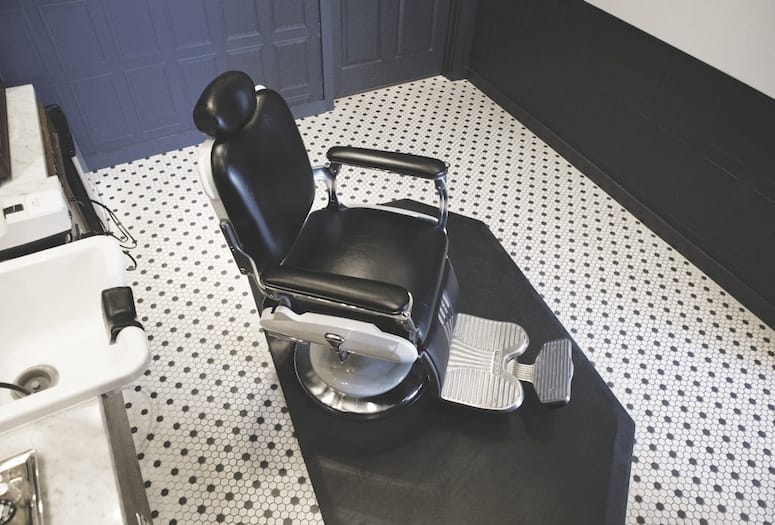 The chair in the Barber Spa at  The Art of Shaving is for men who love to have their faces pampered.
PHOTOS BY ROBERT FESTINO

My husband Tod’s grooming routine has long benefited by simple proximity to me. It’s easy enough for him to pick up some product left on the bathroom counter and apply it to his face.

He does this routinely, sometimes first asking, “Will this make me look good?” Sometimes I know he’s used a product and decided it’s effective when it permanently disappears from my view. This is how he’s come to use acid toners, moisturizers, and eye creams. What he hasn’t been able to acquire from me is anything to do with shaving.

I wish I could tell you I’m not judgmental of the ever-present missed hairs and razor burn that belie Tod’s 30-something years of shaving. But the fact is I’m baffled by his lack of skill. Or lack of attention to detail. Or both. He’ll tell you his proficiency with a razor is twice damned: first by not having a teacher, and second by coming of age in the era of Miami Vice scruff.

The Art of Shaving, next to Saks Fifth Avenue in The Gardens on El Paseo, proved to be the perfect place to offer Tod instruction on the art of face scraping. It specializes in all things to do with men’s facial hair. If you need, say, Peppermint Beard Wash ($18), or a boar bristle beard brush ($75), you’re in luck.

The Barber Spa elevates the lowly task of grooming to pampered artwork. Its services range from a traditional shave to beard, goatee, and moustache maintenance, to a whole head shave. I suggested Tod get the Royal Shave ($60), which augments a shave with skin treatments. Tod writes novels about bad guys who do terrible things to worse guys, so his imagination spun out at the idea of someone having a straight razor to his throat, even if that someone was a licensed barber. I think he almost believed the procedure could only end in spilled blood. 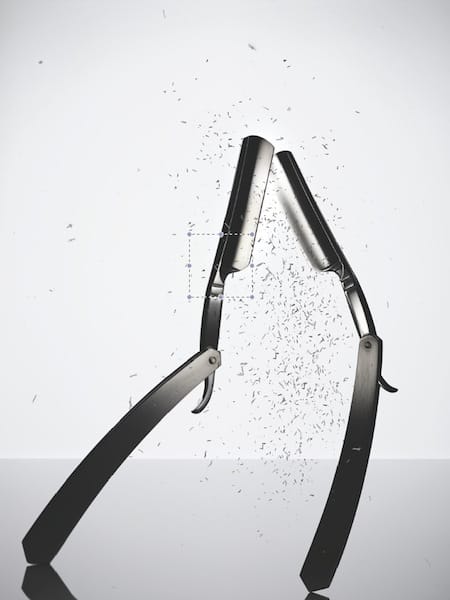 The barber began with questions about Tod’s beard and the products he uses. After a quick cleanup around the sideburns, ears, and back of the neck, the barber’s chair reclined and the real fun began. With a warm towel swathing his beard, the barber trimmed Tod’s eyebrows. Next, Pre-Shave Oil ($25) was applied to act as a barrier between the skin and the blade. I’d hoped for the lather to go on with a brush (the store sells a variety between $30 and $250), but the cream came from a heated dispenser.

There was  much talk of  this step opening the pores And that step closing them. Your pores  are not doors, they Do not open or  close. don’t  let anyone  tell you differently.

Later on he tells me he wasn’t at all relaxed to start. “You’re giving access to parts of your body that you would usually only trust to a physician: your head, neck, eyes, nose. But then, you’re in a dark wood room with pictures of man stuff on the walls. You hear Frank Sinatra overhead, and you get a hot towel wrapped around your face. That’s when you realize men have been doing this forever and the only reason you haven’t is because you’re scared. And that’s silly.”

The first pass was as close as I’ve ever seen Tod shave, so the second pass was a revelation of smooth skin unfamiliar to me.

The third warm towel was followed by rosewater-soaked cotton rounds on the eyes and an After-Shave Mask ($60) of kaolin clay to sooth and purify the skin. There was much talk of this step opening the pores and that step closing them. Your pores are not doors, they do not open or close. Don’t let anyone tell you differently. Finally, a chilled towel with lavender aroma, a rose toner, and After-Shave Balm ($40) completed the treatment.

My husband looks great to me, and his face has never been so kissably smooth and silky. I’m completely on board with the barber’s recommendation for a monthly professional shave. But I can’t leave shaving products on the bathroom counter and hope he picks them up and uses them. They need to be a choice he makes. The kisses help. But so does the appeal to something more.

“My skin felt so good,” Tod says. “And by the end, I was completely relaxed. I also learned more about the hair on my face in the 45 minutes it took to remove it all than in the previous 45 years. You feel or hear every single hair coming off. It makes you pay attention. It makes shaving into an edifying, masculine experience, because you feel like you survived something. So you feel like a million bucks,” he concludes, “and you look like a man.”