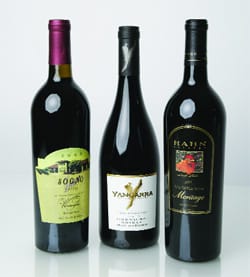 Toss out any preconceived notions that single-varietal wines represent the pinnacle of winemaking. After all, it’s in blending — some of this grape for its fruit-forwardness, some of that grape to lower the acidity, some of another grape to soften and balance — that winemakers are best able to impart subtle nuances that allow them to put their signature on their products.

Once conjuring up images of a cheap jug wine, blends have risen to the top of Wine Spectator’s annual review of the Top 100 wines. Just looking at the last few years attests to the quality of blends. Selected from more than 12,400 wines, Joseph Phelps Insignia 2002 (a traditional Bordeaux-style blend) topped WS’s 2005 list. Four blends ranked in the top 10 of the 2004 list, which was topped by Chateau Rieussec Sauternes 2002 (made from sauvignon blanc and semillon grapes). And blends comprised half of the top 10 wines in 2003.

One of the older and best-known blends is Bordeaux, obviously from the Bordeaux region of France. Eighty-five percent of those wines are red. In fact, most blends are red. “The reds tend to blend better together than the whites,” explains Costa Nichols, owner of Desert Discount Wines in Palm Springs.

“Whites have very specific aromatics. Sauvignon blanc does not blend well with any other grape than semillon, and those two grapes go so well together that they should be blended all the time.” Semillon, Nichols says, adds “fleshiness and a figgy character to the grassy, melony notes of sauvignon blanc.” Wine drinkers, he adds, typically prefer whites such as chardonnay and riesling unadulterated.

Meritage, the U.S. counterpart to Bordeaux, is a registered trademark of The Meritage Association. The name may be used only by wineries that agree to the association’s guidelines (primarily, that only Bordeaux grapes may be used). Founded in 1988, the association now counts among its members more than 150 wineries in the United States, Canada, Mexico, Australia, and Israel.

Napa Valley’s Cosentino Winery re-leased the first Meritage, The Poet, with a 1986 vintage. “[Executive Winemaker] Mitch Cosentino got together with other winemakers doing blends,” says Julie Weinstock, president of the winery and chair of The Meritage Association.

“They wanted to give their most premier blends a term that really set those blends apart.” The term Meritage — a combination of “merit” and “heritage” — was selected in a contest sponsored by the Cosentino, Flora Springs, and Quintessa wineries. Attesting to the growth of Meritage, Weinstock was invited as chair of The Meritage Association to speak to about 300 producers of Bordeaux varietals in Italy.

Despite gaining momentum, Meritage bears a burden. “We have a tasting room on Highway 29 that is very busy,” Weinstock says. “I would say probably 60 to 70 percent of the people who walk through the door have heard of the word, and 75 to 85 percent of them pronounce it ‘Mer-i-täzh.’” (It rhymes with “heritage.”)

Two other words for blends that show up on labels are claret, a British term that designates Bordeaux-grape blends, and cuvée, a French word indicating a deluxe blend of wine batches. Many wineries give their blends proprietary names, such as Joseph Phelps’ Insignia and Cosentino Winery’s The Poet.

Blending, by the way, will not improve an inferior wine, so there’s no reason to think a blend — whether a Bordeaux, a Meritage, or even a “table wine” simply represents a winery’s attempt to salvage a bad batch of grape juice.

“The blend gives you the opportunity to take advantage of a particular vineyard’s harvest and really analyze how specific vineyards’ fruit have turned out that year and use them to their best. Blending gives you the flexibility to make a better wine,” Weinstock says. “It tends to create what I call layers on the palate.”