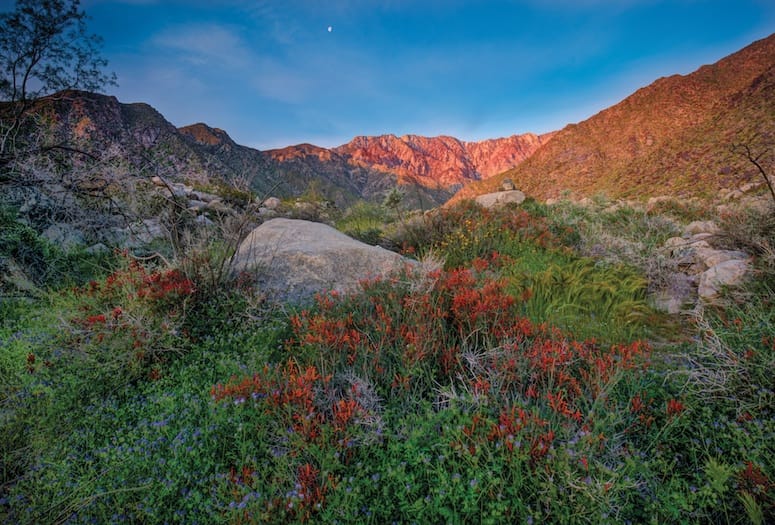 It was dry in the desert. That’s the way it’s supposed to be, of course. But for me as a recent transplant to the Coachella Valley, the land here seemed particularly parched. The ground was rattlesnake colored but soft, like ash.

I was about a mile, maybe two, into the slot canyon, on a hike with a group in an effort to make friends. We passed the same cat’s claw bush three times, and the hike leader apologized for leading us in circles.

“I don’t always know my left from my right,” he said.

“It’s a good thing people don’t die in the desert,” another hiker quipped. The rest of the group laughed nervously.

As we pressed forward, canyon walls hulked hard and red in the late afternoon sun. Someone’s dog plopped down in the shadow of a creosote scrub and refused to budge.

I stopped to photograph a desert mallow, the first one I’d ever seen. The stem was gray and fuzzy, the petals tissue-paper thin and orange. The blossom itself was reminiscent of one of the red-orange poppies from The Wizard of Oz, “so brilliant in color they almost dazzled Dorothy’s eyes,” L. Frank Baum wrote.

“ ‘Aren’t they beautiful?’ the girl asked, as she breathed in the spicy scent of the bright flowers.

“ ‘I suppose so,’ answered the Scarecrow. ‘When I have brains, I shall probably like them better.’

“ ‘If I only had a heart, I should love them,’ added the Tin Woodman.

“ ‘I always did like flowers,’ said the Lion. ‘They seem so helpless and frail.’ ”

In Oz, there is a large, lush field of these flowers and their intoxicating scent almost lulls Dorothy to a deadly sleep. In reality, it took almost a week for 20 men to stick 40,000 wire-stemmed fake flowers into the ground on an MGM soundstage to evoke something magical. 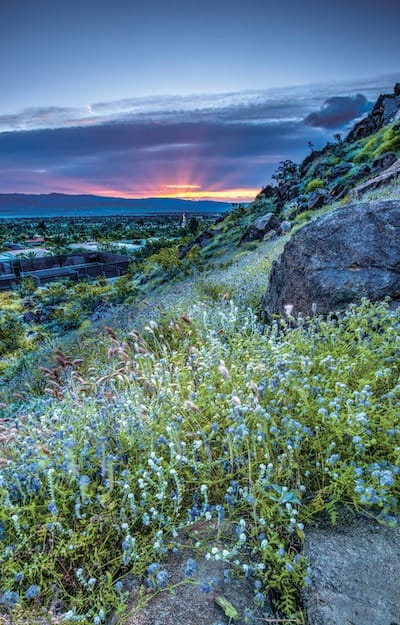 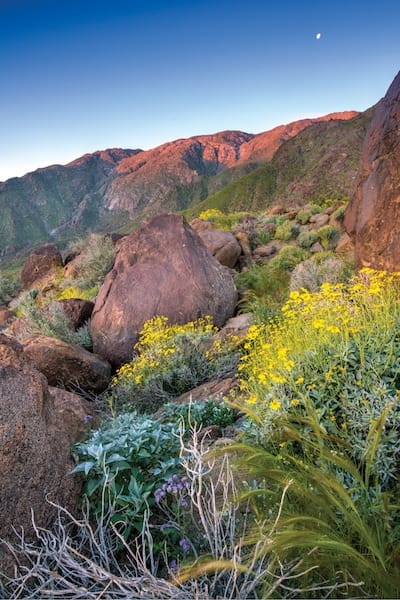 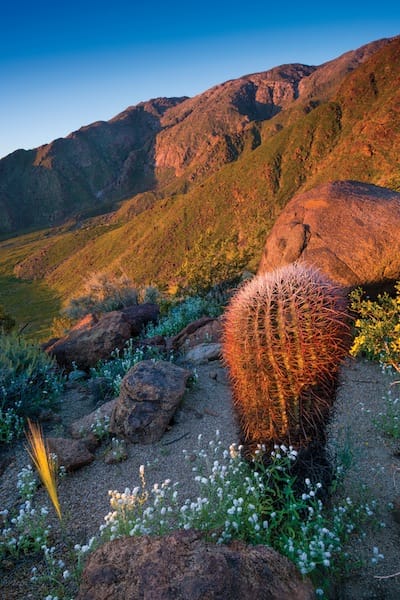 But here in a lonely canyon was something just as enchanting and real — one scarlet mallow pushing through the desert pavement. It pressed its face to the sky, wild and untended on a path of rock and silt, the only flower in sight. The plant had a cluster of buds on it, courageous enough to bloom even here. Far from helpless. Hardly frail. Laying down roots in a landscape that seemed almost impossible.

I grew up in a ranch-style house in Ohio, part of America’s largest community of brick homes. That’s actually what it said on the billboards. We didn’t have wildflowers there. We had weeds.

Every summer the overgrown highway medians became frilly with Queen Anne’s lace, while swamp milkweed and tall grasses encircled the duck pond at the local park. At my house, honeysuckle vines and tall grasses slithered through our chain-link fence. Dandelions and clover dotted the yard. Every Saturday my dad headed to the yard with a trowel and a vat of herbicide, determined to rid the place of flowers. 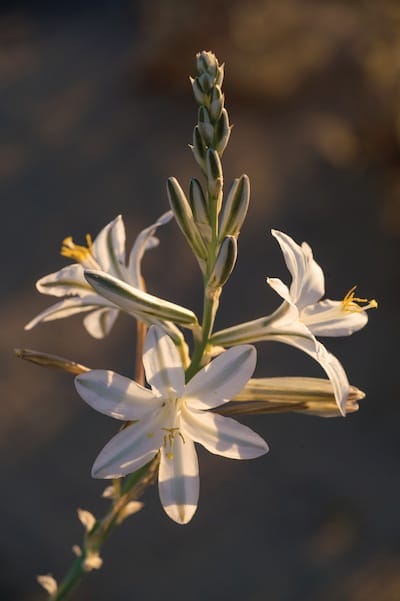 “Every living thing in the desert  is designed to kill you. It’s science, Maggie,” he said. “The only things  that survive are what can bite,  sting, puncture, or wound you. Even the flowers are prickly.” 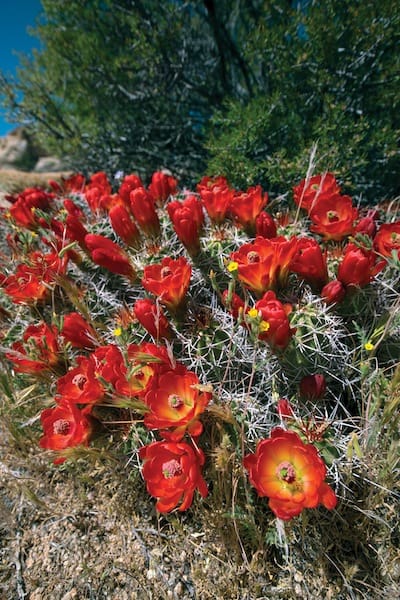 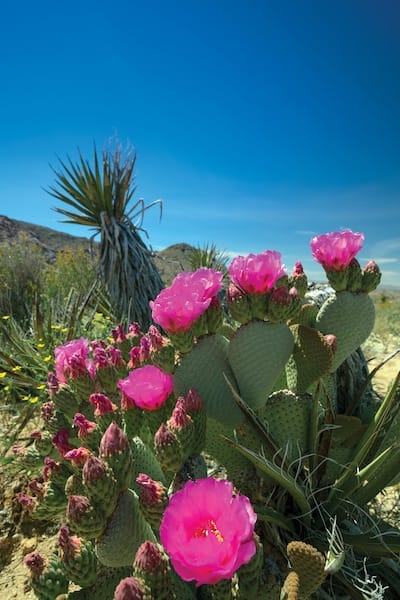 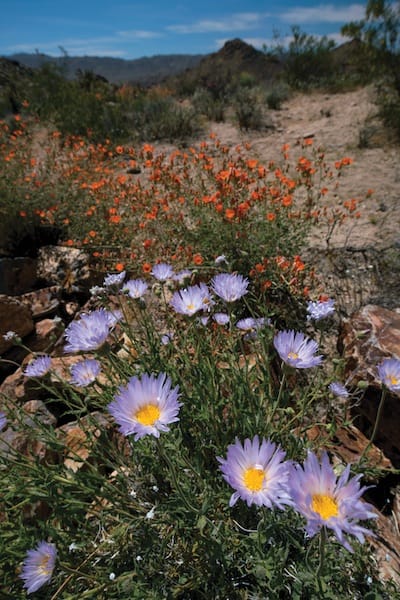 After I went to college and left home, I moved to Cincinnati, where flowers are planted in window boxes and lovely gardens. Then I eyed Southern California. “Everything is just a little harder in the desert,” my friend Kevin warned me.

We were sitting at a swank wine bar in downtown Cincinnati, discussing the job I had just been offered in Palm Springs. Kevin was sophisticated and worldly and, since he had spent a few years in Las Vegas, he was my expert on all things desert.

“Every living thing in the desert is designed to kill you. It’s science, Maggie,” he said. “The only things that survive are what can bite, sting, puncture, or wound you. Even the flowers are prickly.”

But, like almost anyone who plunges headfirst into the unknown, I had multiple reasons: My job was grim, covering the nighttime police beat at a daily newspaper, and I needed a way out. California sounded exciting and appealing. More importantly, my boyfriend was recovering from a horrible accident. He was relearning to walk, while I was learning to be a caregiver for the first time. We were searching for a blank slate. I figured there’s nothing blanker than a desert.

“When you see a rabbit with fangs, remember this conversation,” Kevin said.

I crammed all my clothes, dishes, and books into some old liquor boxes and packed them into my Honda Civic. My best friend jumped in the passenger seat and we drove across the country, ticking off landmarks and roadside attractions as the miles collected: the Gateway Arch, Cadillac Ranch, Meteor Crater, the Grand Canyon. On the radio, Lucinda Williams, Bruce Springsteen, and Tom Petty.

The sudden appearance  of flowering plants was such  a hitch in the theory  of evolution that Charles  Darwin called them  an “Abominable mystery.”

The latter played throughout New Mexico, across Arizona, and all the way into California and the Colorado-Sonoran Desert. Tom Petty’s voice warbled earnest and tender in one of my favorite songs, “You belong among the wildflowers/you belong in a boat out to sea/you belong with your love on your arm/you belong somewhere you feel free.” 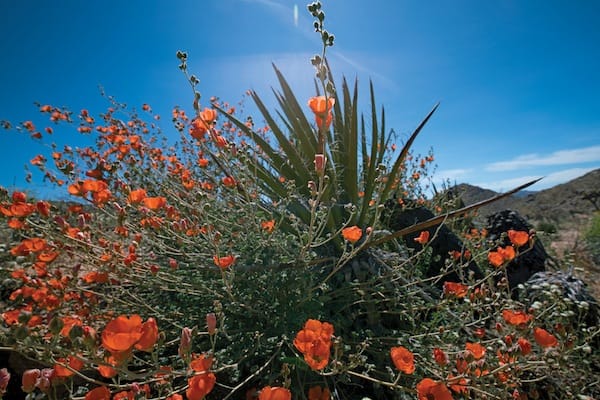 We rolled the windows down as the scenery shifted from forest to prairie, mountains to desert, down long stretches of highway and through small towns with no stoplights. We sang the entire way, hollering like our lives depended on it.

A wildflower grows freely without human intervention. There are two kinds. Those indigenous to the region are called natives. Others, the ones that come from another part of the world, are naturalized. Both share one distinction — they are hardy because they evolved to survive.

The fact that these even exist is something of a miracle. Looking at fossil records, the sudden appearance of flowering plants was such a hitch in the theory of evolution that Charles Darwin called them an “abominable mystery.” Now wildflowers are considered to be some of the most diverse, abundant plants on earth.

Legendary British horticulturist Gertrude Jekyll captured the spontaneity and surprise of these blooms when she called them “flowering incidents.” In the early 20th century, Jekyll began nudging such plants toward the garden, hoping to curate the same sense of wonder.

Here in the desert, these species are still largely uncultivated. The wildflowers flourish in bajadas, those areas beneath the mountain edges where alluvial fans coalesce in gentle slopes and undulating washes, like the flared pleats on a skirt. Desert dandelions, brown-eyed primrose, chia sage, poppies, notch-leaved phacelia, and lupine thrive in the sandy soil.

Did you know so many things bloom in the middle of the desert?

The longer I live here, the less I understand what the geographical distinction means. “Desert” is synonymous with what is inhospitable and inhumane, a place hostile to life, a desolate space. It is a region judged by its barrenness, by what it lacks.

But what about the things that not only exist here, but thrive?

The desert recently erupted into a rare super bloom of wildflowers, thanks to an unexpected bounty of rainfall. The blossoms were pink, red, orange, yellow, violet, and white. The topography transformed into a quilt of color. Some of them were species I had never seen before. Some of them burst from seeds that had been underground for decades, just waiting for the right time to grow.

Late spring, a different honda, same desert. I’m in the driver’s seat. Beside me is that boyfriend, who is now my husband. In the back seat, our toddler son squeals and gnaws on the ear of his stuffed rabbit toy.

We are headed to Whitewater Preserve, 2,851 acres of wilderness just outside Palm Springs. We haven’t even reached the gates of the preserve when I yank the steering wheel to the side of the road and park, overcome by what I see. 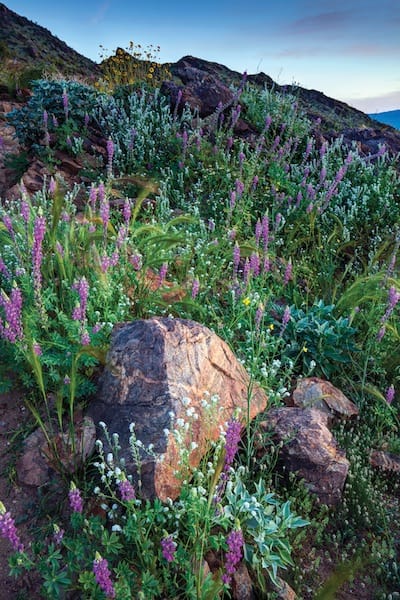 Picture Dorothy’s enchanted poppy field, and then double the amount of flowers. Now  make them sunshine yellow.  That’s the sea of brittlebush that surrounds us.

Picture Dorothy’s enchanted poppy field, and then double the amount of flowers. Now make them sunshine yellow. That’s the sea of brittlebush that surrounds us. Golden blooms form gentle waves, reaching from the roadside, creeping up the mountain.

We exit the car. The stalks of flowers are more than three feet high, taller than our child. When he nearly gets lost in them, that’s not hyperbole. The sun above is big, but not hot. A shiver of a breeze wafts through the bushes and rattles the leaves like wind chimes. My husband strolls into the field with me, holding my hand.

It’s the kind of nature that makes your heart ache. But what inspires awe is not the sheer beauty of the place, which is considerable, nor the drama of the super bloom, which is striking. It’s the improbability of the moment.

The sand was once a mountain. The mountains once lived beneath the ocean. Now they form the desert, which is carpeted in gold, like the richest, most bountiful place on earth. That is how dramatically the world can shift and how resilient life can be.

What takes root is some kind of miracle.

The sand was once a mountain. The mountains once lived beneath the ocean. Now they form the desert, which is carpeted in gold, like the richest, most bountiful place on earth