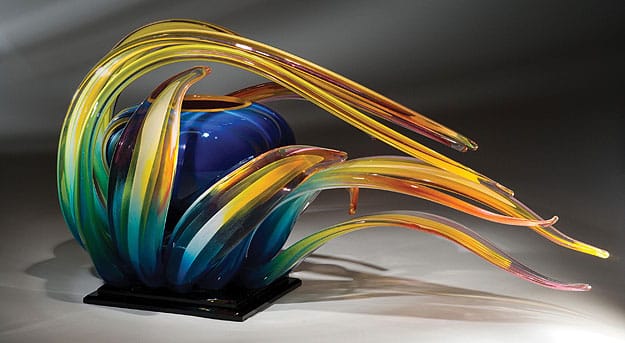 Randy Strong, a prominent figure in the American Studio Art Glass movement, showcases his work March 8-12 at La Quinta Arts Festival. Strong began working with hot glass 40 years ago, initially producing functional pieces like paperweights, vases, and goblets. Over time, his focus switched from functional works to studio art glass. Today, his gravity defying, color saturated, multi-piece sculptures are part of prestigious art glass collections worldwide, including Corning Museum of Glass in New York and the Louvre in Paris. In 2005 and 2008 he won the Niche Award for Best Blown Glass in the United States.

Strong began his career working not in glass, but photography. “My grandfather got me a job at the Oakland Tribune running type,” he says. “This was back in the mid-’60s, and all the photographers there wore starched white shirts and ties. They were supposed to cover a rock concert, but they said there was no way any of them were going to cover one of those pinko-commie things. So I volunteered and they made me a photographer. I covered a lot of rock concerts, days on the greens, stuff like that. What finished it for me was the [violent 1969] rock concert at Altamont. I couldn’t take what I saw through the lens there, so I got out of photography and into ceramics.”

Soon thereafter, Strong met renowned ceramicist Peter Voulkos, who became his mentor. “He’s the one who took clay from a functional media to an art form,” Strong says. “I hung out with him for the rest of his life, from the day I met him. Nowadays all of his stories and comments come back to me. It’s like I’m being lectured from beyond. He’s still teaching me.”

Strong’s affiliation with Voulkos led him, indirectly, into glass. “Because I knew about bricks from working with clay and building kilns, I was asked to help build the first glass studio at California College of Arts and Crafts,” he says. He ended up graduating from the school, and in 1970 he built his own glass studio next door.

“Early on there wasn’t much of a market for glass,” he says. “I slept in my studio for about six years, waiting tables at night. I worked in my studio during the day, waited tables at night, and traveled to every podunk art show from here to there and back again.”

By the late 1970s, Strong had developed into one of the world’s finest goblet makers. “I ended up working seven days a week making goblets, and it was a good business, but I really wanted to do other things. I started doing artwork at night after producing goblets all day. I did that for a few years until I ran out of gas, and then I had to make a choice. I chose art, and, of course, I was broke in a year and a half. It took me 10 years to re-establish myself, because the art market is completely different than the market for functional glass. I had to not only develop the work, I had to develop relationships and contacts in the art marketplace.”

In recent years, Strong has focused on large, free-flowing sculptural works that appear to be floating in the wind. “They’re created in layers,” he says. “It’s like using layers of paint, one on top of another, except the layers of paint are ground up glass with crystal in between.” The resultant sculptures are saturated in delicate hues like fine watercolor paintings, conveying a lightness and movement rarely seen in glass. He plans to showcase several of these iconic works, along with some newly created goblets, at La Quinta Arts Festival.