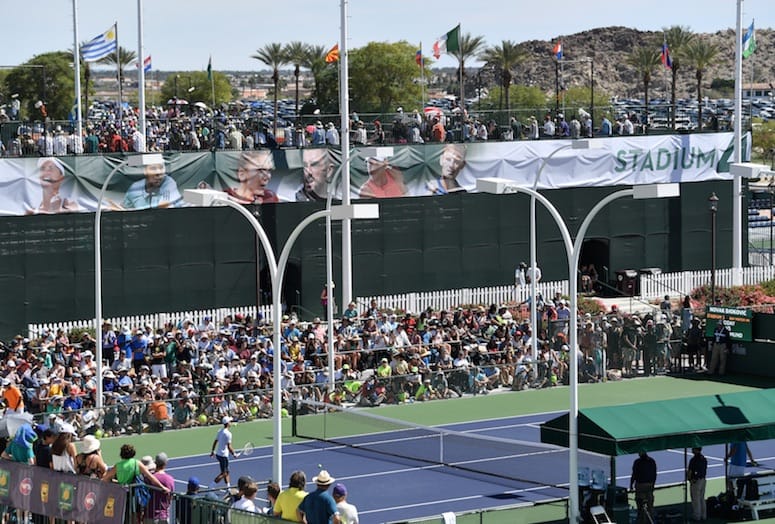 Many wander to the practice courts, which have become such a big deal at the BNP Paribas Open.
PHOTOS BY RAY GIUBILO/MIKE FREY

The event held each year in Indian Wells that attracts star players and nearly half a million spectators is not really a tennis tournament. It is a chamber-of-commerce postcard.

Take Sunday at the BNP Paribas Open. It is the day after they have set a tournament attendance record for a single-day session. A total of 36,361 people went through the turnstiles Saturday. That’s a crowd that would make the San Diego Padres front office happy.

It seems that the place, almost as much as the event, is the magnet.

At 10 a.m., it is 90 degrees in the Palm Springs desert, a place that is, for the most part, a coliseum of orderly luxury and nonstop sunshine. The streets are full of tanned and trim joggers and bikers. Palm trees along the main thoroughfare are in perfect alignment. In the distance, a set of binoculars reveals the tiny wisp of a cloud against the sea of blue. Goodness. A flaw? Off in the distance, like a cherry atop a hot fudge sundae, is a snow-capped mountain.

If you are from North Dakota or Vancouver, Canada—hell, if you are from most places north, east or south–you want to just stand, gaze and be captivated. The tennis tournament is just value-added.

But then, this tennis tournament, universally known as the sport’s fifth major, has refused to be outdone for these two weeks in March by its surrounding host, Indian Wells, which is, after all, one of the fanciest and wealthiest cities in the United States.

Sunday brings yet another throng. Yes, the traffic getting in has been tough. And yes, it is hot. But the effort has been more than worthwhile for those who have figured out that you don’t need a second mortgage on your house for tickets in the main stadium, or have purchased grounds passes or less-expensive seats to outside courts. Now, during pauses in the tennis action, they rest under the hundreds of shade trees, where there are both picnic tables and lounge chairs galore. Naps on blankets are also the rage. 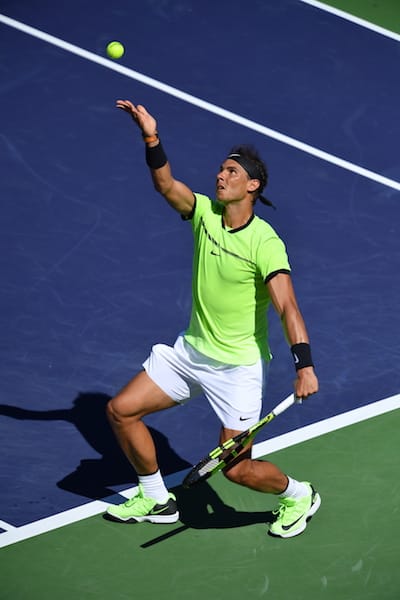 Rafael Nadal says he adjusts much more quickly to the desert heat than to humidity.

Howard Alexander of Menifee sits in a lounge chair, under a shade tree, and watches matches from all over the complex on a huge TV screen. He says he has been coming to this tournament for seven years, has been to the U.S. Open, and likes Indian Wells better.

“The facilities are the tops, the best players in the world are here,” he says. “You can’t beat it.”

Besides all the usual shops and stores, the tournament has cleverly organized its main central concourse into three liquid-themed destination spots—a champagne bar, a rum bar and a beer bar. Nice palate variety.

For the less thirsty and more competitive, there are shaded ping pong tables nearby.

Hungry? Turn around and there is Nobu, or Wolfgang Puck, or a Sherman’s Deli, among many others. Beverly Hills should have so much so close.

Many wander to the practice courts, which have become such a big deal at this event. Many tennis events go out of their way to shield players from the fans during their preparation work. At Indian Wells, they built bleachers and publicize the practice schedule. Many practice sessions are better attended than outer-court matches. Near the back of the practice area, near Miles Ave., Venus Williams warms up, inexplicably wearing a long-sleeve sweatshirt. The bleachers around her are packed.

A man leaving the area talks excitedly on his cell phone to a friend: “I saw Novak (Djokovic) warm up…He moves like a tiger…”

Somehow, seeing a star player hit leisurely backhands from within 30 feet is a bigger deal than watching him save two match points from an upper deck, 60 yards away. That may be as good a glimpse as anything into our current selfie age.

The heat can be a negative, despite the tournament’s creation of an abundance of shade areas. The old California line about how this is a dry heat, gets chatted up, but there is apparently something to that. In his post-match interview Saturday, U.S. player John Isner says he adjusts much more quickly to the desert heat than to humidity.

“You see players go to Miami (the next tournament),” he says, “and they are dropping like flies. This is much better.” On Sunday, no less than Rafael Nadal said much the same thing.

Owner Larry Ellison’s tournament organizers don’t miss a beat. Right next to the practice court area is a huge picture of Petra Kvitova, the star Czech player, who is missing this tournament because she was stabbed by an intruder in December and suffered serious hand injuries. The sign says: “WE LOVE YOU, PETRA,” and has hundreds of signed messages.

The featured attraction of the early afternoon arrives on the main court. Nadal walks out, surrounded by 16,100 seats, of which, despite the temperatures at that point of 95 degrees, perhaps 12,000 are filled. Nadal is playing Guido Pella, and it isn’t long before Pella’s Argentinian fans are crying for him. Nadal has his serve broken early, then breaks back and pounds away en route to a 6-3, 6-2 victory.

“It was a solid match,” Nadal says. “In a first-rounder like this, I don’t try to do too much special.”

There is much more to come. Seventeen-year-old Kayla Day, the new U.S. tennis hope and darling, takes French Open champion Garbine Muguruza of Venezuela to three sets. Defending champion Novak Djokovic would follow, and then, in the night session, Australian Open champion and everywhere-he-goes fan favorite Roger Federer would be on court.

It is a tournament with an abundance of riches, held in a place where there is so much of exactly that.