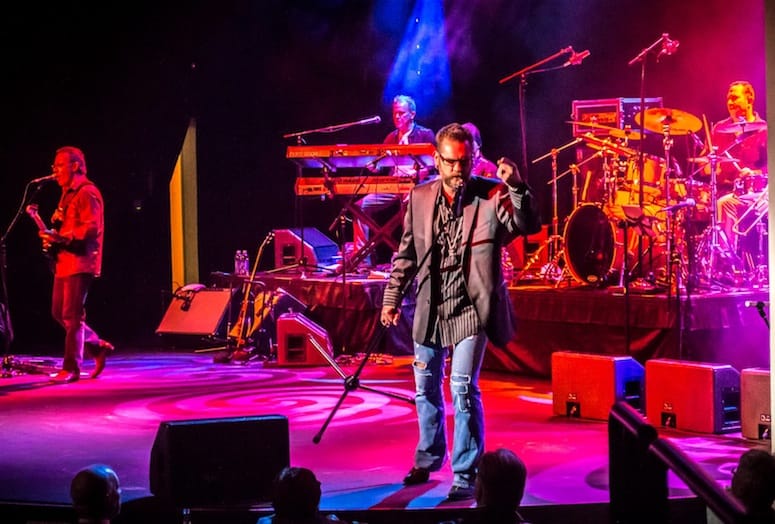 As the song goes, ‘What goes up, must come down.’

Few know that better than vocalist Bo Bice, the runner-up to Carrie Underwood in Season 4 of American Idol who went on to jump-start an admirable solo career before being asked to front legendary classic jazz-rock band Blood, Sweat & Tears (Spinning Wheel, You’ve Made Me So Very Happy, Hi De Ho, God Bless the Child).

“Every career has peaks and valleys, ebbs and flows. One day you’re up, one day you’re down,” Bice says. “But I always tell people at shows, ‘If I stop digging it, I’ll stop doing it.’ Right now, I’m at a very happy place with these guys in Blood, Sweat & Tears. They’re my family.” During a short tour break, Bice called from his home in Georgia to discuss his role in Blood, Sweat & Tears, the legacy of American Idol, and what he had to overcome to become both a better person and better live performer.

Have you spent much time in the Palm Springs area before?
“I’ve spent a lot of time in the past 10 years back and forth from Los Angeles to Palm Springs, yeah. I’ve been up and down the state, and to San Francisco. I love San Diego too.”

What is it about Palm Springs that appeals to you?
“It can draw you in; that’s what makes it such a beautiful and interesting place to stay. It makes you not want to leave. And we’re excited about coming back.

“One of the things I like to do when we’re on the road is to go out, walk around, and really take in the people. That gives you a nice overview — when you walk around during the day to really experience the area, and see the shops and restaurants. Whenever we can, we try to do local things because we like to visit the local vendors and meet the people. It gives you a nice scope of field for who you’re performing for later in the night.”

I’m with you on that. It’s nice to catch the local flavor if you can, especially if you’ve spent the bulk of a day on a bus or a plane.
“A lot of people think it’s all caviar and champagne out here. (both laugh) We see a lot of hotel rooms, and we spend a lot of times on buses. I tell a lot of folks, ‘I get kicked down the road in a tin can for a living.’ We do that for a good bit of the year. It takes some adjusting, but on the back end of that, we get to do what we love every day.”

Can we get a flavor for what we’re going to hear in your set at the Morongo? Will we get some Smiling Phases?
“That’s one of my favorite ones to do! (chuckles) It’s really cool. When I got asked to do this, Bobby [Colomby, BST founding drummer and producer] and I were discussing how we were going to do it. One of the things I said was, ‘I do not want this to be the Bo Show.’ I didn’t want any Bo Bice music in there. People who know me know my music, and know who I am.

“At the end of the day, there’s also new music in there that they’ve never heard Blood, Sweat & Tears do. Bobby asked me, ‘If we’re not doing any Bo Bice songs, what songs do you want to do?’ I said, ‘Well, I want to do Midnight Rider [by the Allman Brothers Band].” Bo Bice: “Each member of the Blood, Sweat & Tears band and crew has given me the confidence that I really needed to remind myself that what made me do my job great isn’t in a bottle.”

That’s a great choice. How did you guys go about rearranging it BST-style?
“Glenn McClelland has been the keyboard player for Blood, Sweat & Tears for almost 30 years now, and he did an awesome arrangement for the song. It ended up working great in the set. You should see the people’s faces when, in the encore, Blood, Sweat & Tears kicks into Midnight Rider, because they don’t really know what it is until you hit the vocal, and then they’re like, ‘Ahhhhh!’”

Must be a nice thing to see. And that one comes after Vehicle, which is a classic Ides of March song you’ve sung for quite some time now.
“Yeah, that’s right. I always tell folks that’s a song that falls under the ‘Songs That People Think Blood, Sweat & Tears Wrote’ category. So many people mistake that song for one of theirs.

“It has also been in my own set for over a decade. I got my first gold record with that one. [Vehicle was the B-side to Bo’s gold-selling 2005 single, Inside Your Heaven.] To be honest with you, that’s what was great about the American Idol experience for me. Some folks badmouth it, but I’ve never been a cat’s who’s done that.”

No, you’ve always been respectful about the show, which I like.
“The main thing is, people say, ‘Are you surprised you’re in Blood, Sweat & Tears?’ and I say, ‘Well, yeah, of course I am. But I’m out here doing what I love for a band I love; simple as that.’ But when it comes to Idol, if you had told me I’d be singing onstage with Lynyrd Skynyrd [doing Free Bird], I would have told you that you were crazy! But if you had told me I’d be standing on the stage of American Idol with Lynyrd Skynyrd, that’s even more crazy!”

And now Idol is in its final season. Do you think they’re going to have you participate in anything before it’s over? Has it come up?
“Well, they haven’t called or invited me yet, but if they call, I have no reason not to. I’ve been very grateful for my experience, and I’ve always told folks American Idol is like a boot camp for the business. They teach you about singing, your image, branding, taking photos and videos, doing commercials. They give you so many avenues that if you choose to take the knowledge and put into action some of the things that they show you, you can have a career in this business.

It’s kind of like being on a Spinning Wheel, to borrow a song title.
“Look at you, man! I might get to sing that one! (laughs) You know, I’ve gotten to experience so much, and I just don’t take it for granted anymore. I’d been running for so long. About 3½ years ago, I made some changes in my life. I stopped drinking, I went through treatment. You learn to adjust. You unlearn bad habits, and then you have to stand onstage and perform sober. It’s a little bit different.

“For a couple years, I lost some of the confidence in what I do. It was easier with that liquid courage sometimes, you know? But each member of the Blood, Sweat & Tears band and crew has given me the confidence that I really needed to remind myself that what made me do my job great isn’t in a bottle. What makes me do my job great is I care about what I do, I love what I do, and I have a lot of passion for what I do, and I can also be a great dad and a great husband sober. I can be a great performer and a great rock star too, and I can go out and rock people’s faces off without picking up a bottle every night.”

That’s so great to hear. You’ve now got the best of both worlds, and to borrow another song title, you’re making people so very happy.
(laughs) “There you go, man — including myself!”