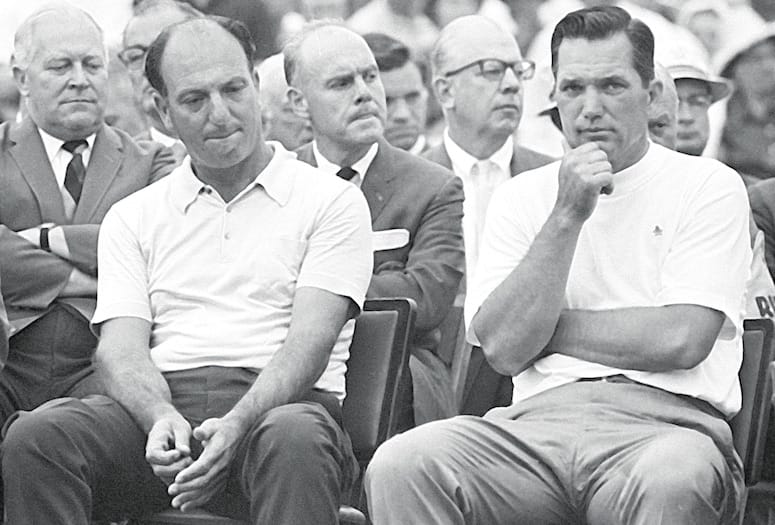 Sixty years ago, a big, strong Midwesterner stalked the fairways of Thunderbird Country Club in pursuit of an even more muscular Easterner. It was the first Palm Springs Golf Classic, and the stakes were a big purse of $70,000 and an unthinkable first prize of $12,000. “I thought I could beat Arnie that day,” Bob Goalby says now. “I liked the course. I was playing well. I was a little nervous at the start, when I looked up and saw Desi Arnaz and Randolph Scott in the gallery. Arnold Palmer was about to take over the game of golf. He had won the Masters in ’58 and was attracting crowds like this wherever he went.

“But I was playing with him that final day. He was hitting it all over the place on the front nine, and I could feel my chances.

Goalby is 90 years old now. He has homes in Belleville, Illinois, where he grew up, and at The Lakes in Palm Desert, where he bought in 1974. He still drives around the desert, but temporarily needs a custom-made walking stick — the wooden head of a driver fittingly offers support — for an infected leg and foot that requires a size 12 shoe on one foot and a size 14 on the other.

His memory is 50 years younger than his body.

“Arnie was something,” Goalby says of the Latrobe, Pennsylvania, superstar. “I was a big guy, strong hands, played football, all that. But I still remember shaking Arnie’s hand one time, and they were massive.”

These were heady days for golf in the desert. The Thunderbird Invitational attracted many touring pros to the winters of desert warmth and sunshine in the eight years prior to that first official PGA Tour event. It had taken a scramble of golf-loving desert residents, led by Ernie Dunlevie, once it became clear that Thunderbird didn’t want to host a pro event forever and that its $15,000 purse would not remain attractive and would end in 1959. Suddenly, there was a need to organize a new, this-is-for-real-and-for-the-long-haul, pro tournament. Dunlevie and his group almost outdid themselves with that $70,000 purse the first year. Goalby had played in the Thunderbird event the year earlier, and he certainly noticed. None of the pros would miss this one: Feb. 3–7, 1960 — sun, warmth, plush greens and fairways, while the rest of the country was in earmuffs and gloves. 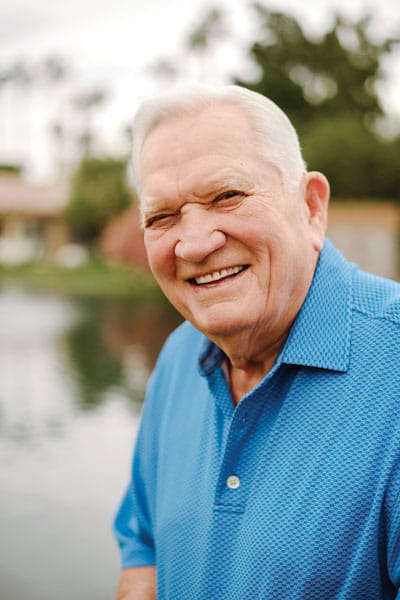 And, especially, big money. Goalby says now that, back then, he could survive on $150 a week. “The first pro tournament I played,” he says, “I shot 64 in the final round and won $20. We’d drive from tournament to tournament and find a Holiday Inn. We thought they were fine accommodations, and we’d split the room rate of $11.50 a night. One time, I was making the drive from L.A. to Phoenix for the next tournament. I was with Jerry Barber. We got to Blythe, and it was getting late, so we stopped at a motel. They wanted $18.75 a night, so we slept in the car.”

Goalby says that the touring pros back then had a money gauge for their success. “We always said that, if you got to the Masters with $10,000 in winnings, you were going to have a good year,” he says.

Eight years after he braced for that back nine against Palmer at Thunderbird, on that last day of the first Palm Springs Golf Classic in 1960, Goalby finished the Masters with a really good year — and with a legacy that defines him. He won that 1968 tournament at Augusta National, and its accompanying $20,000 first prize. But how that came to pass was, and remains, legendary. Roberto DeVicenzo, the Argentinian, who had finished in the group right in front of Goalby, with the same score, signed an incorrect scorecard. Instead of a Monday playoff, DeVicenzo was disqualified, and Goalby was the winner.

“Every 10 years, in years ending in the number 8,” Goalby says, “writers from all over the world call and want to hear the story again.”

As years have gone on, he has embraced it. He never felt guilty about it; others projected that perception onto him. He never had a bad relationship with DeVicenzo over it. They even had fun partnering in a team event a few years later. And if anybody labels it as luck, Goalby can easily counter.

Goalby was a month shy of turning 31 when he embarked on that back nine at Thunderbird in ’60. “Arnie hit his second shot on No. 10 about 40 feet high of the pin,” Goalby says, “and then he ran the putt about 12 feet past. You don’t root against another player, but sometimes, you secretly do. I expected him to miss, but he rammed the comebacker right into the hole and saved his par. And that just fired him up. Sometimes, saving par does that more than making birdies. He got all charged up on the back, made a couple of birdies, even chipped in once.” 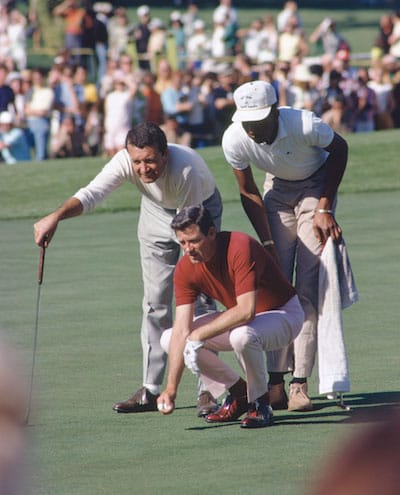 Palmer shot 65 in that final round, won the tournament four more times, and remains the event’s only five-time winner. Goalby shot 68, finished tied for third, and won $3,350. It was his highest paycheck to that point in his career. He also is one of only three of those who finished in the top 10 that day who is still alive. Bill Johnston tied for fifth and is 94; Al Besselink tied for ninth and is 97.

Goalby played on in the desert through 1974, but never won. He did, however, get as close as humanly possible to the championship trophy in 1988, without so much as swinging a club. Working as an on-course analyst for NBC, he walked the final holes in the Bob Hope Chrysler Classic alongside the eventual winner, Jay Haas, his nephew. Haas, the son of Goalby’s sister, Shirley, who is now 93, had started with a 63, shot a 70 on the final day, and won by two.

The Desert Classic tournament has been very good to the Goalby-Haas family. 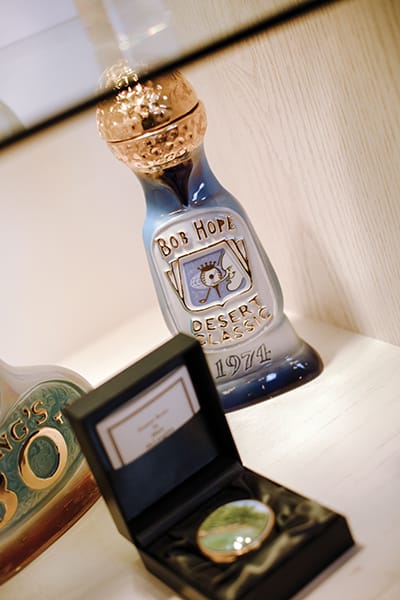 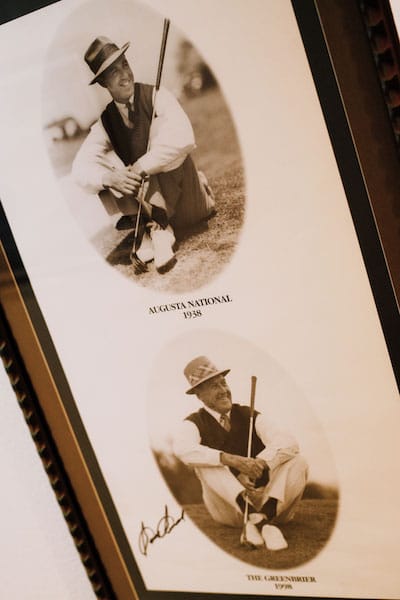 Suffice to say, no more $11.50 Holiday Inns for the Goalby-Haas family.

"We always said that, if you got to the Masters with $10,000 in winnings, you were going to have a good year."

In April, Bob Goalby will make his 62nd trip to Augusta and the Masters. The writers will find him, and he will tell the story all over again, with some newly remembered twists:

About how he had played in the group with DeVicenzo the day before that ’68 Masters final round and noticed that, by the time he got to the scoring table and started to check his card, DeVicenzo was up and gone, giving his card a quick scan and a signature;

About how, when he got to the scoring area after the final round on Sunday, DeVicenzo, who had played in the group ahead of him, was still there, sitting and staring into space. Trying to make small talk, Goalby said to him that they’d just have to go out for the playoff the next day and settle things. DeVicenzo didn’t answer.

About how, two weeks later — and stunningly — DeVicenzo finished a round at another tournament and had to be chased down by an official because he had forgotten to sign his scorecard.

And about how, in all the times they saw each other after the ’68 Masters, Goalby and DeVicenzo never talked about it. 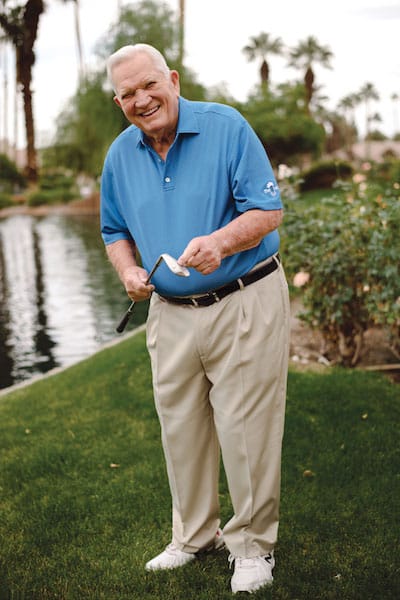 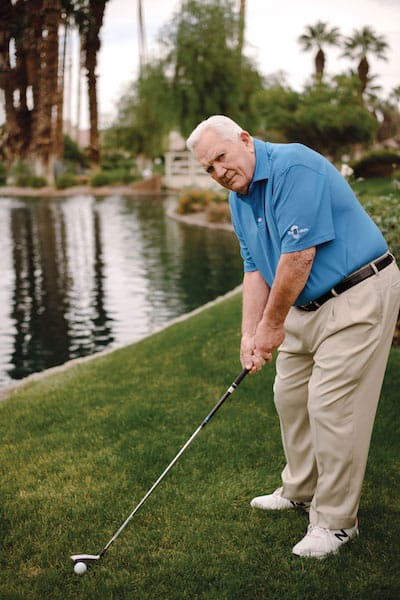 In April, Goalby will make his 62nd trip to the Masters in Augusta, Georgia.

But before that trip to the Masters, Goalby has something more exciting on his to-do list. He will be at the desert tournament, watching his great nephew, who has struggled recently, try to win a third title.

“We need to get him going,” Goalby says. “I’ll go out, and maybe they’ll let me have one of those PGA Tour carts to ride around in and follow Billy.”

For what Bob Goalby and his family have meant to the tournament, and the desert in general, they ought to give him a gold-plated cart, a driver, and a standing ovation on every hole.

Is he physically up to days of watching golf? “I was out the other day,” he says, “hitting balls.”