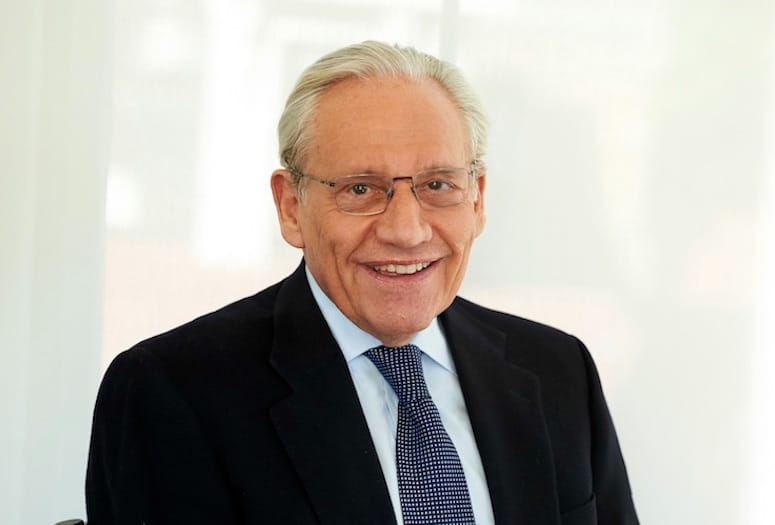 Bob Woodward: "We’re in extraordinary times, no question, and how it comes out is going to be really important to everyone in the country."
PHOTOGRAPH BY LISA BERG

Legendary journalist Bob Woodward, whose Watergate reporting with Carl Bernstein at the Washington Post led to President Richard Nixon’s resignation in 1974, is coming to Palm Springs to talk about current events and share insights from his interviews with nine U.S. presidents.

The 76-year-old Pulitzer Prize-winner — still working at the Post after 49 years — will discuss “The State of the American Presidency” on March 6 as part of the Palm Springs Speaks lecture series.

Woodward took time out from his national tour and work on his second book about Donald Trump to speak with Palm Springs Life about his career, politics, and what keeps him optimistic.

In your appearances around the country, you’ve said, “The old order is dying.” What do you mean?

I cited the example of Barbara Tuchman’s book, The Guns of August. Her book is about how World War I was kind of an accident, and she writes that on history’s clock, at that time, the old order was going up in a blaze. And I think in a sense what happened in 2016 has its parallels — not absolute, but its parallels. The old order — Republicans, Democrats — didn’t figure out what was going on… and that Trump really captured what Barbara Tuchman calls “history’s clock.” The world changed, and I think a lot of people didn’t see that, including myself.

How do you remain optimistic, given all that you know about politics and world affairs?

I’m from the Midwest, and so my natural tendency is to be optimistic. And I think there are indeed lots of problems. We’ve had problems before, so I think we’ll sort our way through this. Exactly how or who, you know, that’s open. There are so many unknowns. It’s a pivot point in history. And the upcoming election is really important to see whether Trump gets another term, or some Democrat or Independent comes in and takes over the presidency. One of my themes in my talk is about the extraordinary concentration of power of the presidency. I think we’ve lost sight of how much power presidents have. In many ways, Trump has demonstrated that. So who is president really matters.

You’ve written about the last nine presidents. What similarities have you noticed?

What is Trump’s greatest strength in trying to secure a second term?

Well, he’s got the power of the presidency. He’s got the support of the Republican Party. He’s seized the communications channel — when he tweets or makes a statement, he takes over the news cycle. But the country’s very divided.

Is this an unprecedented level of divisiveness that you’ve seen over your time covering politics?

Presidents are divisive because they’re elected by one party, or generally by one party. I don’t know. We’re in extraordinary times, no question, and how it comes out is going to be really important to everyone in the country.

What can you share about the book you’re working on now about Trump?

I’m still working on it and it’s never good to talk about a work in progress. It’s the second book on Trump and it will come out in September or October.

What do you think about the future of the media landscape?

The internet and some of the devices and the whole culture has created an atmosphere of impatience and speed. You see it all the time: Give it to me in a sentence. What’s the headline? Tell me what’s going to happen. People want to know the future and I don’t think journalists are very good at covering the future. We run by the past too often and don’t spend enough time trying to explain that. We run by the past. Oh yeah, that’s over, what’s new? What’s on Twitter? What’s on social media?

In this quick-fix culture, what does it take for reporting to have weight with the public?

Get it right. Get it in-depth. Find documents, notes, diaries, talk to witnesses, people who participated and people who surround the issue you’re writing on. That takes a lot of time, and I have the luxury of time.

What do you like to do when you’re not working?

I’m looking forward to coming (to Palm Springs). It’s one of the great spots in the country. I used to play golf. I had a hip replacement, so I haven’t played in a while. Just sit and read is about the best break I can get.

Is journalism as exciting and rewarding to you as when you first got into it?

Yep. Reporters have the best jobs — at least in this country, I believe… We get to make momentary entries into people’s lives when they’re interesting, and then get the hell out when they cease to be interesting. Doctors and lawyers have patients or clients who often have routine matters. We flee from the routine. We’re trying to write about what’s extraordinary and what’s different and what may have meaning. I’ve worked at the Washington Post for 49 years and I never once remember an editor saying, “OK, let’s go find something routine and boring.”