Editor's Note: Originally slated to be available for tours in February, you can view Bobby Berk's Casa Tierra, May 12-15, 2022. For tickets, visit modernismweek.com.

During a break last year from filming his super-popular Netflix makeover series Queer Eye, bubbly designer Bobby Berk was vacationing with pals in the Coachella Valley and fantasizing about something that he — and many visitors like him — typically daydreams about while lounging by the pool with a cocktail in hand: owning his own piece of the desert.

However, unlike most other folks, Berk desired more than a vacation home. He wanted a Modernism Week Showcase Home. “I’d been talking to Modernism Week for a few years about doing a show home, but I didn’t want to do one until the time was right,” says Berk, who launched his design firm in 2006 after working as the creative director for housewares brand Portico. “I wanted to be able to buy something myself, and I wanted it to be my home.”

During his stay, Berk, who’s worked with Christopher Kennedy on several of his Modernism Week show homes since 2015, was browsing real estate listings on his phone between dips in the pool and sips of his drink. He landed on an unusual-looking property perched above Palm Desert in Cahuilla Hills called Casa Tierra. The price was right, and it ticked all of his boxes business-wise, but it was hardly love at first sight.

The Spanish-style house was the opposite of what he dreamed would be his first property and design project in the Coachella Valley: a dilapidated, meandering collection of clay tile roofed structures with an eccentric assemblage of doors, windows, and stairs more reminiscent of the Winchester Mystery House in San Jose than the Kaufmann Desert House in Palm Springs. 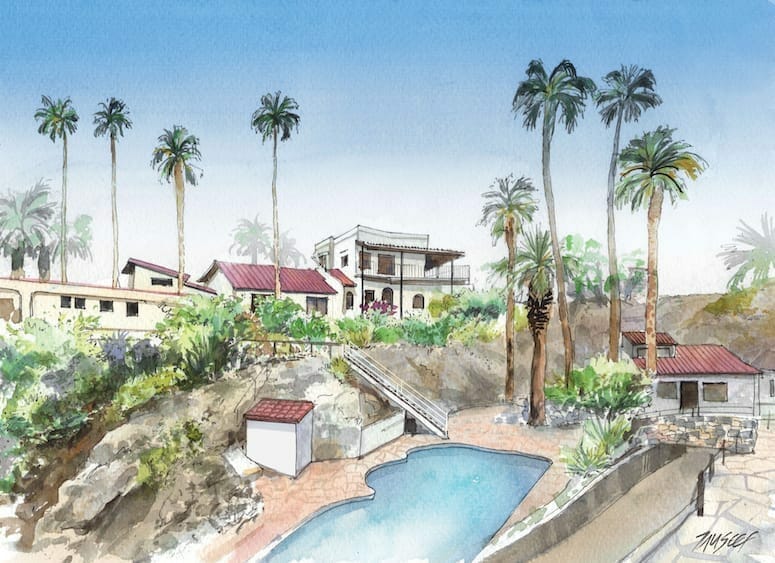 The Spanish-style hidden gem is in Cahuilla Hills.

“When I imagined myself buying a Palm Springs or Palm Desert home, I imagined a midcentury modern home,” Berk says. “But what I like about this property is it’s very unique. It’s not what you expect to find in Palm Springs and Palm Desert. I like how it’s spread out across multiple buildings.”

The seemingly remote location in unincorporated Riverside County also appealed to the designer and TV personality. “Driving through Cahuilla Hills is so interesting,” Berk says. “It feels like you’re out in the middle of nowhere, but you’re just eight minutes from El Paseo.” He didn’t overthink it. Berk put in an offer on the 5,000-square-foot house and was in escrow a few days later.

After attending and collaborating on Modernism Week projects for years, Berk is elated to finally have his own property serve as the Modernism Week Showcase Home for 2022. The annual week-long celebration of modern design, architecture, fashion, and more has long been one of Berk’s favorite design events to attend.

“I’ve been obsessed with midcentury modern architecture for years,” he says. “As long as I can remember, it’s been one of my favorite styles of architecture. And as a former New Yorker, it was always amazing to get the hell out of New York in February. The weather is usually awful that time of year, so it’s a great excuse to come to the West Coast.” 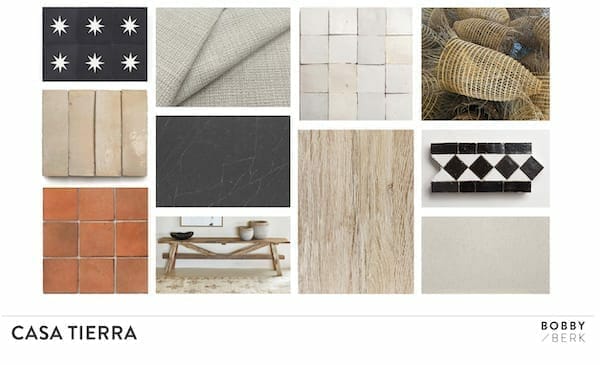 Berk’s neutral palette is inspired by the desert.
Built in 1950, Casa Tierra features seven bedrooms and seven-and-a-half bathrooms on two-and-a-half acres. There’s a main house as well as smaller buildings like casitas, a pool house, and three-car garage. Besides clearing dead vegetation from the land and removing an awkwardly placed hot tub on the balcony, Berk’s first order of business after procuring the property was gutting the interior and knocking down a few walls in the living areas.

“We definitely opened the home up,” he says. “It had several additions over the years, and it felt very compartmentalized. I didn’t like that. I wanted it to have a much more modern feel, so when people come to gather, they can be together and not closed off in different rooms.”

In the main house, Berk removed both a standalone wood-burning fireplace and a staircase situated in the living room to provide more communal space for visitors. He also transformed a windowless game room with low ceilings into an intimate home movie theater.

“There was no place to hang out,” says Berk, who mostly plans to utilize Casa Tierra as a vacation rental and event venue when he’s not sojourning there with his husband, Dewey Do, and friends. “The property can sleep around 20 people, and the previous owner had a three-seater sofa and a chair in the living room. I was like, ‘Where are all the people sleeping in this house hanging out?!’ For me as a designer, I’m always thinking about how a home can be lived in.”

Berk didn’t adhere to one style when it came to interior design, incorporating chic European sophistication with comfortable desert touches while keeping Casa Tierra’s cheeky elements like stained glass windows and a bell tower. He spruced up the walls with Dunn-Edwards paint, redid the kitchen with JennAir appliances, and decked out the property with fixtures from the likes of Brizo, Willis, and Ferguson Bath, Kitchen and Lighting.

Berk standing in front of the pool.

“It’s modern, Spanish, and Mediterranean with a bit of rustic flair,” Berk describes. “The house is quirky and old, so we didn’t want to go super modern. It wouldn’t have worked. The home would’ve lost some of its charm. We embraced the rustiness and went neutral with the colors. There’s already so much color from the desert: the greens, rusts, all the colors I love.”

Berk, who in addition to co-hosting the latest seasons of Queer Eye and the glassblowing competition Blown Away on Netflix, currently has about 10 other home design projects on his docket. He tapped Orange County-based interior designer Paula Oblen to collaborate with him on Casa Tierra and oversee the renovation.

“She designed this house — The Summit in Palm Desert — that I stayed in and absolutely loved,” Berk says. “It was very much my aesthetic. When I bought [Casa Tierra], I knew me and my team didn’t have the time for it to be a full-time job for us, so I called her and said, ‘Hey, you wanna locally spearhead and manage this project?’”

The isolated location of Casa Tierra, which translates to earth in Spanish, provides beautifully unobstructed vistas of the Stone Eagle Golf Club and Palm Desert as a whole, but the undulating site means there are several winding paths — and some not-so-welcome wildlife — scattered between the series of structures.

“One of the many hurdles was making the home safe again,” Berk says. “The former owners didn’t maintain it very well, and I don’t want anyone visiting or staying at the home to have to ever worry about safety. We added additional railing. There were areas where rattlesnakes came in, so all of those holes were filled. We didn’t want those kinds of surprises.”

Naturally, Berk’s favorite part of the property is the pool area. It’s positioned below the main house at the base of the property surrounded by dramatic stonework, creating a one-of-kind oasis that must be seen to be believed.

Berk is already planning for additional modifications to Casa Tierra, such as solar panels and a water reclamation system, and he’s not finished daydreaming about the desert either. “We also bought the property next door,” he reveals. “It’s two-and-a-half acres across the hill, so we’re going to build a really cool super-modern home there.”

• READ NEXT: Bobby Berk Gives 3 Tips on How to Bring a Modern Flair to Your Home.