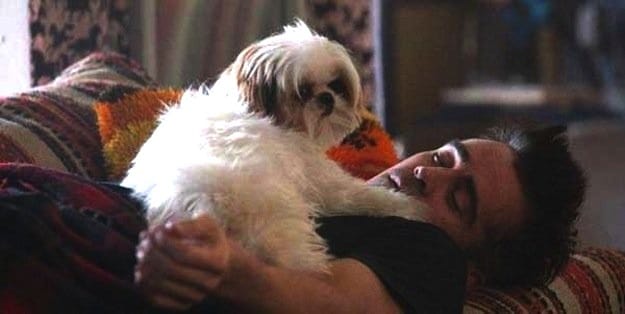 Don’t be surprised to see Bonny make a move toward any males in the audience during the Le Chien Couture Fashion Show on March 16 at Fashion Week El Paseo 2013 in Palm Desert.

The 2-year-old Shih Tzu will be among a group of starlet dogs to hit the runway promoting a line of canine clothing designed by Linda Higgins, owner of Classy Dog Designs. This is the second year Higgins has led what is one of the most popular events during the first weekend of Fashion Week.

In the movie, Bonny is kidnapped from her gangster owner (Harrelson) by two of Farrel’s friends (Walken and Rockwell), and the Los Angeles criminal underworld is turned upside down as the chase unfolds to return Bonny to its rightful owner.

“Her first real connections were with me and then being held and interacting with this group of actors,” said Clair Dore, Bonny’s trainer. “It’s funny. She just really gravitates toward men now.”

However, Bonny wasn’t always such a people-person. When Dore went looking for a Shih Tzu to fill the role, she found Bonny just as she was about to be placed in a shelter by her previous owner.

“What was really difficult was that she was quite despondent when we got her,” said Dore, who trains animals for Performing Animal Troupes in Palmdale, Calif., which owns Bonny. “She hadn’t been really socialized very well. She didn’t really connect with anyone.”

Complicating matters was Dore had just five weeks to prep Bonny for the movie role.

“It was a lot of intense bonding process with her,” Dore explained. “She went everywhere with me, she slept with me, I fed her by hand when she wanted to eat, and she was really, really picky. It was stressful at times for me. But it all definitely worked out.”

The role didn’t call for a lot of action on Bonny’s part, but interacting with the cast was crucial. “She was very good with warming up to the cast,” Dore said. “She might come off as a little disinterested, but gradually you could see her warm up to them.”

While the movie received so-so marks, Bonny stole the show. She even received her own Oscar of sorts, winning a “Pawscar” for Best Animal in a Leading Role. The “Pawscars” are the American Humane Association’s version of celebrating pet performances in film.

Bonny’s rag to riches story is not completely unusual. Nearly 90 percent of the animals seen in movies are rescue pets, Dore said.

“You don’t have the opportunity or the time to get a puppy or breed them,” Dore said. “Sometimes that works out, but we’re looking in shelters for these dogs. You’re looking at an adult dog, and you can tell its personality and often times the dogs that people can’t handle make the best studio dogs. Dogs that are getting into all kinds of trouble, that’s a dog with a lot of personality and confidence.”