Boots in Squares Palm Springs Stays a Step Ahead 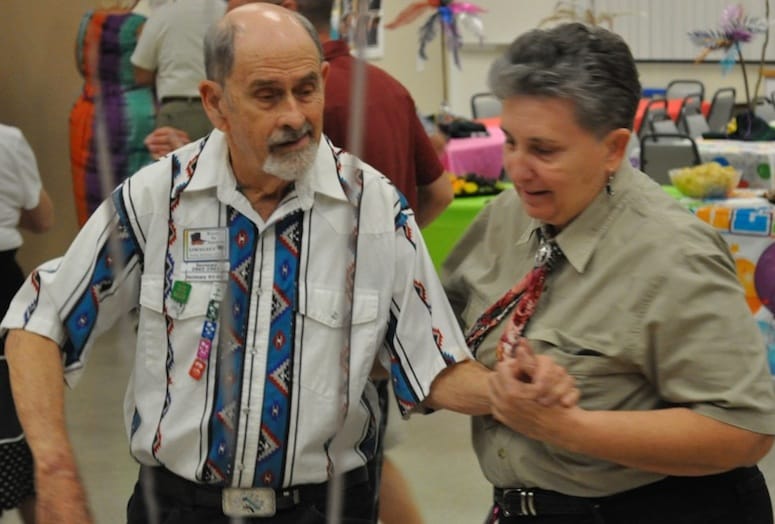 At 80, Dwight Fine enjoys square dancing and its social interaction as a charter member of Boots in Squares Palm Springs.
PHOTOGRAPH BY JIM POWERS

On the dance floor.

The 80-year-old has been square dancing since 1962 and understands its long-term benefits. “I love all types of dancing, but square dancing has provided me with both a physical and mental activity,” Fine says. “It’s also very social and gets me out. I think square dancing has been a big factor in helping me to live so long.”

When he first started square dancing was a recreation mainly relegated to married couples, making it difficult for an individual to find partners. After pursuing other forms of dance including folk, clogging, and Scottish country dancing, Fine returned to square dancing when he moved to Palm Springs in 1992.

He heard rumors about a gay square dancing club coming together, and he became a charter member of the Coachella Valley&rsquo;s LGBT square dance group. Fine serves as club historian and has seen changes in the group over the years.

“For example, traditional square dance has a dress regulation which requires men to wear pants and long sleeve shirts with women wearing a petticoat of sorts,” Fine says. “Our group encourages a lot more freedom and attire is casual here. Anything goes. Also, we encourage rotation of partners rather than dancing with the same person for an evening. It makes it social and fun.”

• 1995: Boots in Squares was admitted to the International Association of Gay Square Dance Clubs.

Not Just for Kicks!

Square Dancing is not something you can just &ldquo;pick-up&rdquo; overnight. So if you think you&rsquo;ll just stop in for a whirl around the dance floor, you could also wind up being a part of the entertainment as you try to work your way around the floor.

There are more than 45 calls to learn in what&rsquo;s called the “mainstream class” – the first level of learning.

“It’s not terribly hard, but the calls keep stacking up,” says Darryl Beach of Boots in Squares. “It requires strong mental skills to remember the calls and actually make the moves the way you’re supposed to. There is also technique involved because you are working with your partner, and you need the physical skills to coordinate and move through the positions. Besides, it’s worth taking the beginning class because the more you know, the more you can do, the more fun you’ll have.”

Do-Si-do and Here We Go!

• We have lots of twirling kicks and flourishes.

• We have lots of enthusiasm and our dances are high energy.

• We welcome straight couples to join us. In fact, we have many snowbirds than enjoy our club’s exuberance.

• It’s a fun way to meet new people, socialize, get some exercise, and be mentally stimulated.

VIDEO: Boots in Squares attracts a variety of participants who enjoy dance and the social interaction.