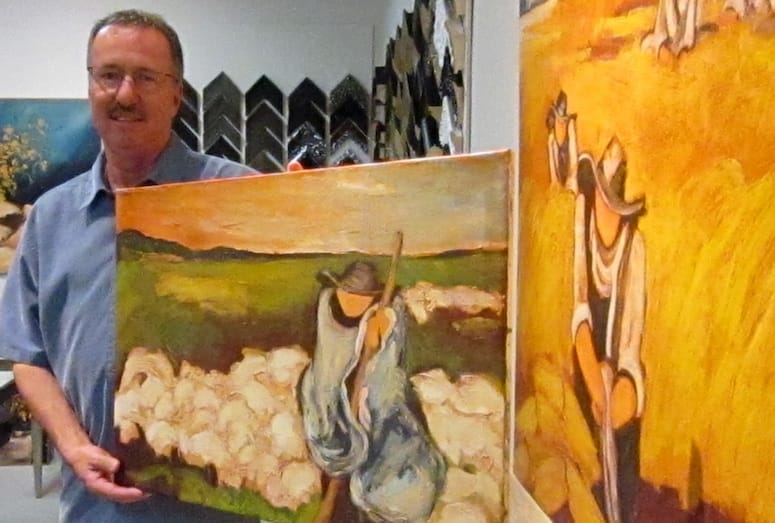 Brian Marki with one of his late mentor's paintings of a Latin poet, Virgilio, by Sandro Negri.
Photo by Marcia Gawecki

Fifteen years ago in Portland, Brian Marki met an Italian painter who became his mentor and best-selling gallery artist.

The artist arranged for Marki to have an unforgettable experience — a solo art show at his palazzo studio.

Sandro Negri had restored the roof, but left the walls of the 17th century structure in open air. It belonged to an old Italian family and set on hundreds of acres; a perfect backdrop for painting landscapes.

“Sandro taught me the cultural significance of irises, which gave me a stronger connection to my work,” says Marki, who is also an artist. After Negri’s death three years ago, the family closed his palazzo studio, and his legacy was at risk of becoming obsolete. Marki vowed to maintain it. He kept in touch with Negri’s agent in Mantova, and recently acquired 36 more paintings.

Negri would create on-site sketches, and then transfer them to large, abstract paintings in the studio.

“He purposely kept the workers’ faces blank, so that he was representing all working men and women,” Marki explains.

“I think we’ve turned the corner on all that dark, ominous, apocalyptic art,” Marki says. One of his featured artists is Richard Etts (pictured at right) from Palm Springs. In the 1960s, Etts was creating whimsical human-animal sculptures and showed with Andy Warhol. Later, Etts created lifelike casts of his hands turned into lamps. They are collectible on eBay, and the Smithsonian has one in its collection.

“All of those years making molds helped me understand negative and positive space,” he says.