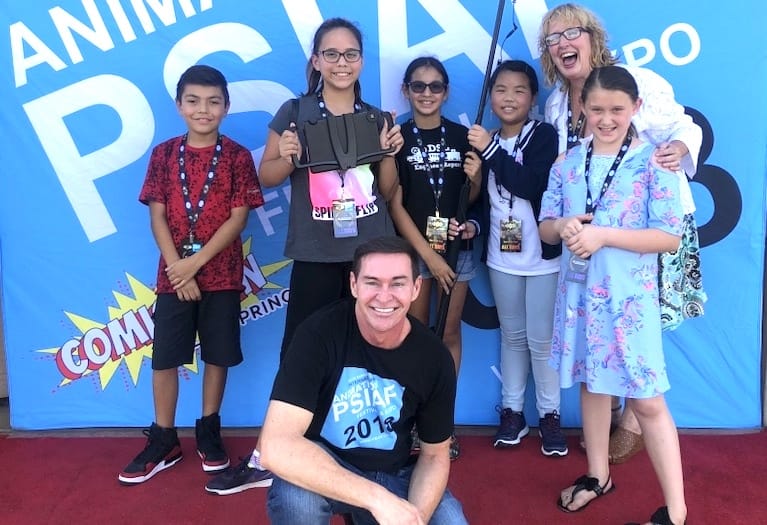 When Brian Neil Hoff officially steps down as founder and artistic director of the Palm Springs International Animation Festival (PSIAF) at the end of this month, while it may close one door for him, he’s hoping it swings another open to bring new blood to the fest.

“I want this more than anything to be a call for action to hopefully inspire people to get involved and take over where I left off, and get in there and support it and help it grow,” says Hoff.

Hoff originated the animation festival in his backyard. Literally. In 2008, he hosted the first Backyard Film Festival behind his house. Most of the entries came from his contacts in the industry, but Hoff saw the potential for the festival to move to a bigger stage.

In 2017, Hoff saw his dream come to fruition when he launched PSIAF, received 3000 submissions from around the world, and arranged a screening of Loving Vincent at the Annenberg Theater before a packed house. Director Hugh Welchman couldn’t make the screening because he was in Poland, but Hoff emailed him and asked if he could shoot a video with his phone to welcome the audience.

“So he did a video on his phone and sent it to me, and we figured out how to play it in the theater just before the movie screening,” Hoff recalls. “He addressed the Palm Springs audience from Poland, and he said, ‘Hello, I’m Hugh Welchman and I’m freezing cold in Poland.’ And his dog comes up and is jumping in his lap. And there’s all this Van Gogh art around him. And I spoke before the whole crowd, and it was a moment of like, ‘wow’.”

In 2018, Hoff joined forces with Chris Spellman, founder and director of Comic Con Palm Springs, and the combination provided PSIAF with the marketing and media operations to tap into a larger audience.

“I really, really admire Chris a lot,” Hoff says. “And we struggled quite a bit as we built it together, as we tried to kind of find our path through the festivals, do audience interest, and trying to figure out things like that. And I really admire everything he did, so many neat things.”

They moved PSIAF to December in 2019, and then the coronavirus pandemic pushed the 2020 fest to online only. Hoff will preside over the PSIAF awards on Jan. 28 as part of a festival jury that includes actor Matthew Modine (Stranger Things), producer Adam Rifkin (Underdog, Zoom, Mouse Hunt), and NBC News Senior Producer Neil O’Brien. He plans to remain involved in animation, using the art form as an educational tool, while splitting his time between Rancho Mirage and Connecticut.

“I’m very proud of the work I’ve done over the years to celebrate this amazing art-form, animation, which started over 100 years ago,” Hoff says. “It has the power to inform, transform, educate, and inspire an unlimited world of digital story-telling. If you’re a fan of animation, consider making a donation to support independent artists and animators to reach their goals and fulfill their dreams. Thanks for your encouragement and support over the past four years.”

• READ NEXT: 5 Local Artisans Show How Creativity Thrives in the Desert.