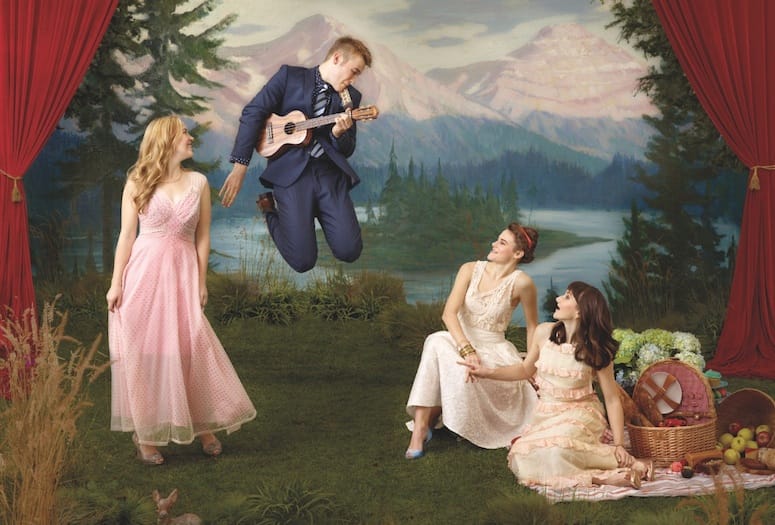 The McCallum Theatre continues to showcase a diverse lineup of theater, jazz, comedy, music, and dance ensembles from all over the world. This year, you can laugh with Emmy and Golden Globe Award–winning comedian Jane Lynch (pictured below) in See Jane Sing (Nov. 14); humorist and YouTube phenomenon Jeanne Robertson (Nov. 20); and Steve Solomon’s Cannoli, Latkes & Guilt (Feb. 11–12).

Dance enthusiasts can get lost in the grace and beauty of that art form at the 18th Annual Choreography Festival on Nov. 7 and 8. The festival features a competition with original routines created by talented choreographers and performed by both professional and pre-professional dancers. Jersey Boys is part of the Broadway lineup at McCallum this season.

You won’t be able to stop toe-tapping along with popular Irish dancers Riverdance during their 20th anniversary world tour Jan. 22 through 24. And prepare to revel in witty comedy as the men of Les Ballets Trockadero de Monte Carlo take the stage with their marvelous interpretation of classical ballet on Jan. 27.

The McCallum’s prestige also draws other talent from around the globe, bringing to the Coachella Valley such sensations as the National Dance Company of Siberia (Nov. 17); Mariachi Sol de México (Dec. 17); and the Peking Acrobats of China (Jan. 10). Pianist Joo and Ingudesman perform on May 18. And audiences won’t have to leave the desert for a Broadway experience with 42nd Street, Pippin, Jersey Boys, or Disney’s Beauty and the Beast.

The returning much-loved series Mitch’s Picks, a selection of shows booked by McCallum President and CEO Mitch Gershenfeld, treats audiences to acts they may not be familiar with. The Pasadena Roof Orchestra artfully presents jazz tunes of the 1920s and 1930s on Feb. 10. Sound of Music lovers won’t want to miss the singing group The Von Trapps, the great grandchildren of famed Captain and Maria von Trapp, on March 2. And violinist Ingudesman and pianist Joo, often described as Mozart meets Monty Python, will dazzle crowds on May 18.

The McCallum always presents lively programs that mix classical arts with cabaret and celebrity appearances. Renowned musical artists, from the legendary Kingston Trio (Nov. 22) and country chanteuse LeAnn Rimes (Dec. 20) to smooth crooner Frank Sinatra Jr. (Feb. 5–6), shine throughout the season, with solid repertoires appealing to many genres. Opera fans can enjoy beloved standards and contemporary arias sung by the Ten Tenors on Dec. 4 and 5, while disco fans can get down with Night Fever and ABBA Mania tribute bands on Jan. 7 and 8. Since 1997, the McCallum Theatre Institute, an outreach and education branch of the McCallum, has featured programs in visual arts, dance, music, and theater to inspire young people. This year, the Field Trip Series, running September through May, expands cultural horizons for about 700 students through energetic performances in in its JazzReach program and by the Monkey BAA Theatre Company, which addresses relevant issues such as bullying in I Am Jack.

Two other important programs, the Studio Project and the East Valley Dance Project (EVDP), partner with schools in Thermal and local studios to explore the facets of body movement, dance, choreography, and production, culminating with a performance during the McCallum’s Choreography Festival (Nov. 7–8). There is not a bad seat in the house to enjoy performances like Beauty and the Beast.

Where to Sit:  The four-story McCallum Theatre, with approximately 1,100 seats, has been called a “jewel box” with “no bad seat in the house”; it’s both a grand and an intimate setting.

What to Wear:  Apart from requiring shirts and shoes, the theater has no dress code. Anything goes, so there’s no excuse to miss out on a great show.

Why not Enjoy a Snack: Refreshments are sold in the lobby, and preordering drinks is recommended to save precious time during intermission. The original and revival productions of the four shows that make up the 2015–2016 Broadway Blockbusters series won a total of 18 Tony Awards, the highest honor bestowed by the professional theater community. See them on these dates:

• 42nd Street (Nov. 24–29). A timeless account of a young entertainer trying to find success and fortune on the Great White Way.

• Pippin (Jan. 12–17). A musical play about a prince’s attempt to find purpose and fulfillment in a tumultuous kingdom during the Middle Ages.

• DISNEY’S Beauty and the Beast (March 25–27). Disney’s version of the beloved tale about a lovely princess who tames a tortured prince.