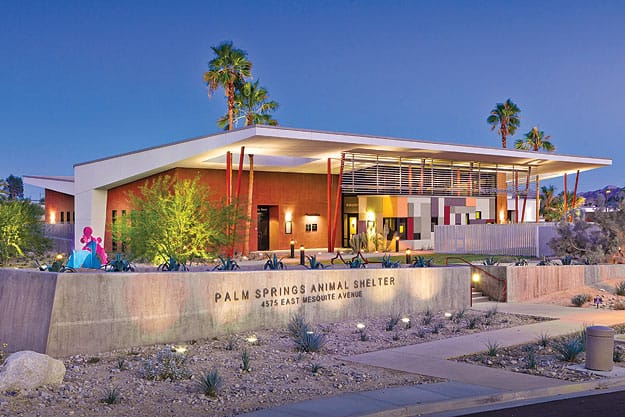 We text people on iPhones, read books on Kindles, and download music to iPods. So many aspects of our lives seem “of the moment.” Perhaps that is all the more reason to appreciate solid objects that stand the test of time — like great architecture.

Chris Sahlin recalls what it was like to grow up when midcentury modernism was “the current thing.”

“I was raised in Glendale, where many people lived in houses that were Cliff May style, the predecessor to midcentury modernism,” says the Palm Springs architect. “They were people I thought lived in something unique and wonderful — the clean line, the thinness, and the transparency of the whole thing. Midcentury modernism has a tremendous amount of honesty.

Palm Springs architect Jim Cioffi came to the desert in 1957 and uses some of the same words to describe the structures he saw being built around that time.

Sahlin, Cioffi, and several other desert architects working today stand on the shoulders of those who created the iconic structures that attract architecture aficionados worldwide.

“One of the most important things that I see when I look at modernist work is its scale,” Cioffi says. “It tends to be less heavy, less tall, less overbearing than the way work started to develop in the ’70s. It had this human scale to it that’s easier for people to relate to. I think we got a little away from that in post-modern design in the ’70s and ’80s.”

“When there’s an identifiable building, very clearly articulated, then those architects were working in the most rational processes of the time,” says Lance O’Donnell, a partner in o2Architecture of Palm Springs. “What made it special here was the architects began to experiment with materials. … That’s where Palm Springs really had an advantage. It continued to be a testing ground.

“In the residential sector, you often had Hollywood elite coming out here, and what they really wanted was a home that celebrated the peaceful mountain views and climate. Architects decided buildings in this place really needed to celebrate the desert.”

While most people (at least those who are not architects) define midcentury modernism by butterfly or folded roofs, pointed overhangs, corrugated metal, patterned concrete block, clerestory windows, patterned-block screen walls, and other structural components, Phillip K. Smith III of The Art Office in Indio says, “For me, midcentury modern represents more an attitude about design than it does some of the aesthetic elements that it’s known for.

“The desert was a laboratory,” Smith continues. “There was nothing here. It was a clean slate in terms of context for architects to work within. I have always looked at it more as an attitude that we should always be pushing the envelope; we should always be looking to technology, looking to push the cutting edge in an effort to create design for the 21st century that we will want to preserve 50 years from now.”

O’Donnell also steps away from the notion that specific design elements encompass the whole of midcentury modernism — even for the architects of that time.

“For them and for us today, it’s not a style that we are working with,” he says. “We are working with the most up-to-date, rational building processes married with the current ecological, sustainable, cultural demands.”

“There were less restrictions on materials and methods,” Cioffi points out, referring to energy and earthquake codes that have taken effect since the middle of the 20th century.

“A lot of design elements have to change, but there are ways to do it that keep the visual integrity of those elements but bring it up to date,” Sahlin says.

O’Donnell’s firm uses architectural elements that people identify with midcentury modernism not as a “style” or “iconic symbol,” but rather as a practical component, such as a butterfly roof to collect rainwater at a single point.

“It’s a means to an additional, sustainable goal,” he says. “It doesn’t hurt that it has a shape that’s recognizable.”

Replicating the midcentury modern’s aesthetic not only requires architects to find ways to meet the codes and desires of current culture, but, as Sahlin points out, “Sometimes the things that look the simplest cost more money, because they require more fit and finish. The elements are exposed, so you have to build things from the ground up very precisely.”

Sahlin sums up the appreciation for the purity of the local modernism this way: “People come to the desert and there’s a different look to the nature. It’s cleaner, more barren. It’s the awesome strangeness of it all that people are attracted to, and I think the [midcentury modernist] architecture fits that better.”

“I would like to be part of the next generation of design in the desert,” Smith says. “I am always looking to push design and create something that no one has ever seen before. [Midcentury modernism] was about creating a sense of timelessness. … It’s still exciting, relevant, and innovative.”

The Fountainhead’s protagonist architect Henry Roark battled traditionalists in his steadfast belief in modernism. While making Roark a creative freethinker, Ayn Rand also gave him a fount of inspiration in another architect: Henry Cameron. Here in the desert, architects have their favorite forerunners among Southern California’s midcentury modern giants.

Jim Cioffi: “William F. Cody has yet to really be discovered, I think, by local architectural historians. … His body of work here is not as extensive as E. Stewart Williams’ or Donald Wexler’s; and yet, in my opinion, he was the best of the lot. There was a reason they called him “’Wild Bill,’ because he knew no boundaries. Unfortunately, one of the best of his designs is gone: Huddle Springs [restaurant]. … His work really was quintessential modern; and it wasn’t cookie-cutter, stereotypical modern. He was always exploring.”

Lance O’Donnell: “E. Stewart Williams could embrace modern architecture with a touch of Scandinavian design, like wood elements that helped warm up interiors. Donald Wexler I admire because he had a strong desire to make the architecture the best that it could be for his clients; and, with that goal in mind, he was always achieving very architecturally interesting and durable buildings. My favorite is Bill Cody, because he really had a keen sense of the desert and how to design beautiful buildings that just amplified the desert setting. I also admire Albert Frey and John Porter Clark, because they really did experiment with the common building materials that people associate with midcentury modernism.”

Chris Sahlin: “In my mind, Richard Neutra set the goal for every other person to follow. I like John Lautner’s architecture better, because it’s more unique. Every one [of his buildings] is different. But in doing that, he didn’t get the following that Richard Neutra did, because Neutra had more of a standard of excellence. Neutra has got to be the father of midcentury modern architecture. Before him is Cliff May in the ’40s. He developed the post and beam for ranch houses that was then adopted by midcentury modern architects.”

Phillip K. Smith III: “I think E. Stewart Williams was the most poetic of all of the [midcentury modern] architects. He was very much working within that genre, but there’s a twist in every one of his projects that makes you contemplate them. They’re different in a soulful way.”