When West Coast Cannabis Club first opened their medical marijuana dispensary in Cathedral City in January, they found that many of their customers were cancer patients seeking relief from pain, according to co-founder and president Ken Churchill, a Colorado native with restaurant management background.

Many Coachella Valley customers are “looking for a cure,” said Churchill, noting that he’s not a doctor and he avoids using that term. He’s emphatic that, “I always tell them there’s no 100 percent cure. A lot of people are looking for something to combat chemotherapy. They just want to live a normal life and not always be in pain. Some of them come in saying they’ve tried everything else. I tell them, ‘You can use CBD (cannabidiol) product without getting high and it spurs hunger.’ People come in with chronic pain and symptoms from many different diseases. Others complain of lack of sleeping.”

Churchill and his partner hope to expand to other sites in the Inland Empire as soon as permits open up. Churchill is “mum” on the sites, due to competition in the burgeoning industry, he said, except to reveal that his group has applications in process. West Coast Cannabis has operated a medical marijuana delivery business out of San Diego for a year before applying in Cathedral City, he said. After watching the industry unfold, Churchill said it was time to lead and be an example in a field that is going to affect so many people.

“The impact we were having on people (in San Diego) was really inspiring,” he said. “It has meant a lot to me and it gives you that drive to keep going. We have people who come in every day and thank us for being there for them, and providing them with things in a safe and reasonable manner.”

In December, the city council in Cathedral City voted to extend a temporary ban on dispensaries for another six months while the potential impact of the new industry on the community is being reviewed. West Coast Cannabis Club was approved prior to the extension. Churchill said he believes they are the ninth to open in the city since 2014. 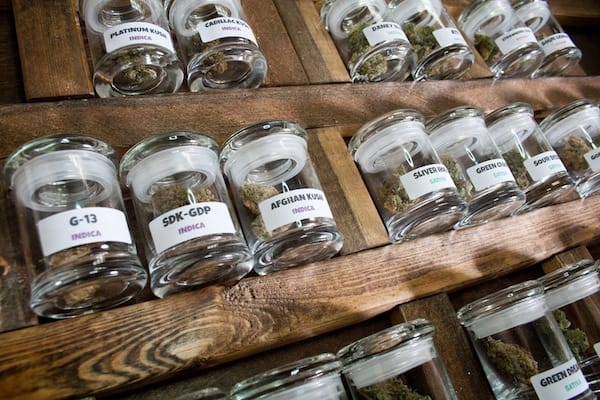 The new dispensary offers about 250 products in its 1,000 square feet of retail space.

Customer numbers have been steady, he said. He’s expecting to serve up to 150 people a day by the end of the year, 60 percent of them at the store and 40 percent by delivery. West Coast Cannabis offers online clothing purchases, but not for other products. The dispensary is open 10 a.m. to 10 p.m. seven days a week, with delivery service 10 a.m. to 8 p.m. 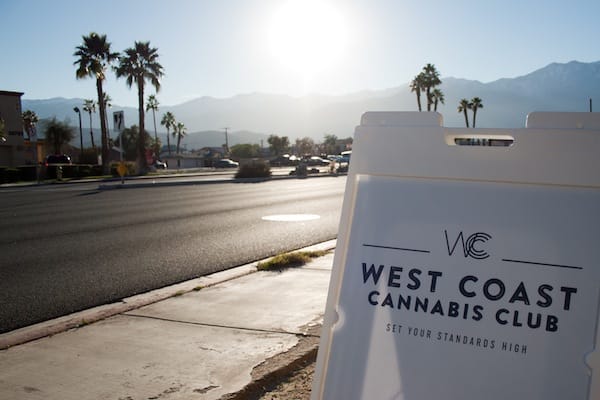 “Fifty-five to 60 percent of purchasers ask for the cannabis flower,” Churchill says. “Concentrates are also very popular because they come in so many forms. Vaporizer pens are popular because they’re not so harsh as smoking. We also have topicals, something you can rub on lotion style, for people who don’t want to smoke. We have the CBD variation and the THC (Tetrahydrocannabinol, the active ingredient in marijuana) variation.”

Joints, gummies, T-shirts, tea, brownies, peanut butter dip cookies and accessories are also offered in the dispensary’s 1,000 square feet of retail space. “There are about 250 products,” Churchill said. “Most of the flower is grown in Southern California. Nothing is pre-packaged. The average flower purchase is 1 to 7 grams. Employees weigh the products in front of members and the weight is imported into the point of sale system.”

Churchill says cannabis business is more high tech than the major restaurant companies for which he has worked. Purchasers must be California residents, age 18 and over and show identification and a doctor’s recommendation. “There are also some situations when legal guardianship is allowed,” Churchill says. “For example, we’ve worked with one parent who treated her 14-year-old son with CBD oils because he was having over 50 seizures a day. CBD is able to relax you, helping you sleep without the psychoactive effects. Within a few weeks, her son was having less than five seizures a month. She called me one day crying because he was able to go to school for the first time. She had homeschooled him before that.”

As for community impact, Churchill said, “Neighbors have been amazing to work with. There were concerns initially, mostly regarding smell. However, we sat down with everyone to make sure their concerns were heard. I believe everyone appreciates that. We put a lot of time and money into the odor filtration system, so as to not disturb anyone else.”

Businesses that plan to ultimately offer recreational marijuana too, must get licensed as medical dispensaries first, he said. It took Churchill and his partners almost two years to find the right city, go through the application process, and secure real estate for their dispensary. Churchill said their application went to the city in May 2016. The application process to sell recreational marijuana is expected to begin in January 2018, with permits expected March onward.