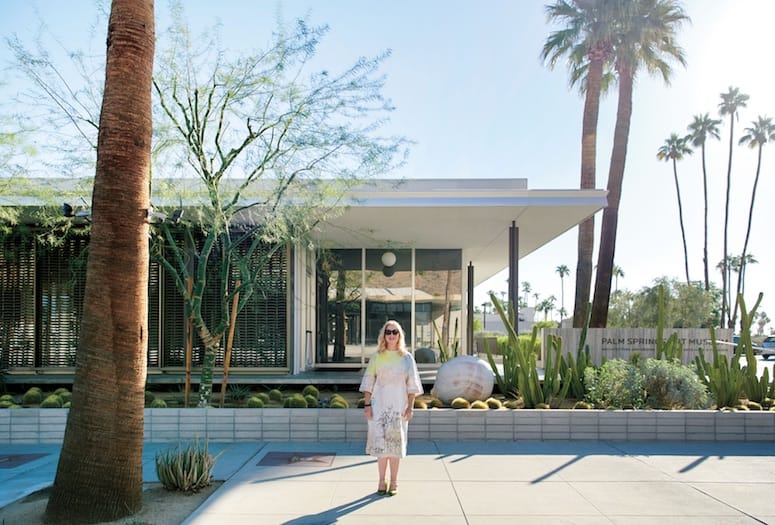 Brooke Hodge on putting together an exhibition: “I spend a lot of my time reading, going to see other exhibitions, and visiting artists, designers, or architects in their studios and learning about how they work.”
PHOTOGRAPHS BY JASON SCHMIDT

Brooke Hodge slips into a booth at Persimmon Bistro at Palm Springs Art Museum as the lunch rush begins, taking time for a quick chat during the installation of Unsettled, a wide-spanning exhibition exploring a variety of themes of the Greater West that runs through April 30. She has just spent part of the weekend in the High Desert, scouting local artists and watching the SpaceX launch, an experience she calls “weirdly mystical,” complete with parliaments of owls flying around the illuminated night sky as the rocket flared.

After two years at the helm of the Palm Springs Art Museum Architecture and Design Center, Hodge, who hails from Kingston and Toronto by way of Vancouver, is immersed in the desert lifestyle. During this break from the installation, she beams while discussing the artists she’s watching, what she does for fun, and her lifelong connection to her predecessor at the museum, Sidney Williams, whose father-in-law E. Stewart Williams designed the 1961 Santa Fe Federal Savings and Loan building that now houses the Architecture and Design Center.

How are you and the Williams family connected?

Sidney Williams’ family name, before she married Erik Williams, was Koerner. Her father [John] was a well-known Canadian artist. My mother grew up on a farm in British Columbia near Kamloops; when she went to university, she boarded with the Koerner family in Vancouver. In exchange, she looked after their two little girls, Sidney and Diane. Sidney and her sister were flower girls in my parents’ wedding, and Sidney met me when I was a baby. I met Sidney again not long after I moved to Los Angeles, at a reception in Palm Springs in 2001 or 2002. She said she was from Vancouver, and I knew that Sidney Koerner’s name was spelled S-i-d-n-e-y, and she was interested in architecture. Hmm. Maybe two weeks later, my mother told me that Sidney worked at Palm Springs Art Museum. And I said, “Oh, I just met her!” I called Sidney and told her, and we couldn’t believe it. It’s one of those small-world coincidences. When I heard that Sidney was retiring while I was living in New York, I really wanted to come back to California.

“You can show  a painting,  or a sculpture,  or a piece  of clothing, but you can never show the actual architecture  in an exhibition.”

You’ve worked at Cooper Hewitt, Smithsonian Design Museum in New York; Hammer Museum and Museum of Contemporary Art in Los Angeles; and theHarvard University Graduate School of Design. What is your educational background?

I always say to people, “I just worked at Harvard, I didn’t go to Harvard!” I did my master’s of architectural history at the University of Virginia and minored in historic preservation.

What career achievements are you most proud of?

When I was at the Hammer Museum in 2013, I worked on a book about the architect A. Quincy Jones, who worked here a lot with Paul R. Williams. We commissioned all new photographs of a lot of his projects. It’s called A. Quincy Jones: Building for Better Living. Another exhibition I’m really proud of is one I organized for the Nasher Sculpture Center in Dallas on the work of Thomas Heatherwick, an industrial designer/product designer [Provocations: The Architecture and Design of Heatherwick Studio].

In addition to trying to program two exhibitions a year at the Architecture and Design Center, I’m also involved in other initiatives related to the museum at large, so I do a lot of work here at the main museum, too. People tend to think that it’s a separate, independent entity, but it isn’t. I like to spend a lot of my time reading, going to see other exhibitions, and visiting artists, designers, or architects in their studios and learning about how they work. That’s stage one of putting together an exhibition, and then it’s crystallizing the concept for it. Then there’s the process of presenting it to people inside the museum to get it on the schedule, and then there’s the research phase. The exciting part is when you see it all come together in the gallery space.

What are the challenges in curating architecture shows?

A lot of architecture exhibitions are boring. Those drawings were never meant to be shown in museums; they were working documents. You can show a painting, or a sculpture, or a piece of clothing, but you can never show the actual architecture in an exhibition, so you have to think of ways to communicate the essence of that building. It’s something I’ve been thinking about since 1985 when I worked at the Canadian Centre for Architecture in Montreal. And I don’t think I’ve cracked that — not yet. One way would be to do it through film, at a life-size scale, so that people could actually understand moving through a building. The artist Doug Aitken, known here for the Mirage house he did for Desert X, created [the MOCA Los Angeles exhibition] Electric Earth as a video project over a 12-hour period. It was a series of spaces created by screens where the film was showing. You really felt like you were with him walking in the city, experiencing different things, and sounds, and changing light. 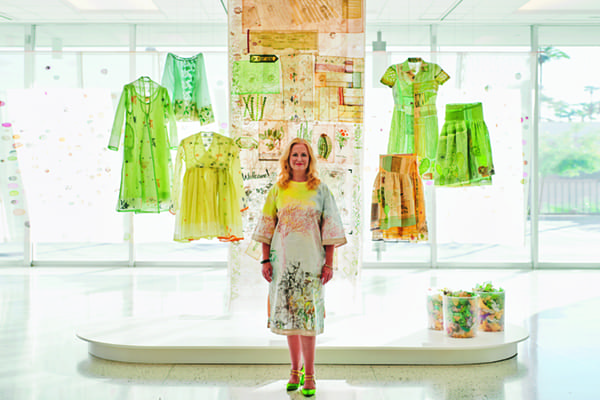 What types of exhibitions interest you?

I’m trying to do exhibitions that have a California connection, and a local connection, that expand the definition of architecture and design. I’m also trying to show a balance of contemporary and historical. My first exhibition last spring was In Conversation: Alma Allen and J.B. Blunk. I see that as the beginning of a series, putting together a contemporary figure with a historical figure and seeing the conversation that develops between their work.

Which local artists are you watching?

I’ve been going up to the High Desert a lot lately with friends to visit different artists. Dan Anderson works with Alma Allen but also does his own work with wood and sculptural/functional work. Jonathan Cross is another. He works in ceramics, but he does wood-fired clay pieces. His work is very architectural, and it reminds me of the Italian architect Carlo Scarpa and also of the Japanese architect Tadao Ando. Now I think he’s looking more at some of the deconstructivist architects. Rob Pruitt is also a very well-known artist from New York who has a house in Palm Springs. There are a lot of really interesting weavers too: Janelle Pietrzak has a studio in Yucca Valley, and Andrea Zittel has a whole weaving studio at her complex in Joshua Tree.

I play a lot of tennis at the Palm Springs Tennis Club. One of the reasons I wanted to join there is because Paul Williams and A. Quincy Jones designed part of the club — and I knew that from working on the book project. I also went horseback riding last Christmas through Smoke Tree Stables, which was really nice. I love to do things outside, and that’s why I like going up to the High Desert. It’s not just visiting artists in their studio but also seeing that great big sky and all the land.

What’s next at the Architecture and Design Center?

The next architecture show, opening Feb. 2, is Hugh Kaptur: Organic Desert Architecture. We have his archive in our collection at the museum, and we’re consulting with him on his projects and filling in the background. Steve Keylon with the Palm Springs Preservation Foundation is working on a tribute journal dedicated to Kaptur’s work. We’ll go into more depth on probably five or six of his projects, in different types of buildings — residential, commercial, institutional, hotels. He did so much here, and he is our last living “desert modern” architect.