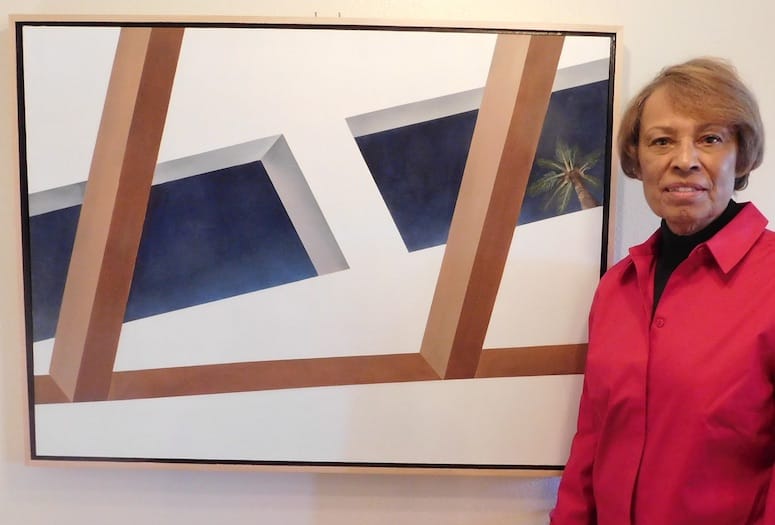 Palm Springs artist Barbara Gothard stands by her painting, Hurdles No. 4,. Her work will be on display at Art Palm Springs in the Jorge Mendez Gallery.
PHOTOS BY MARCIA GAWECKI

In 2012, while living in her Palm Springs home, artist Barbara Gothard lost nearly everything to water damage and mold, caused by heavy rainstorms.

It had a profound impact on her future series of artwork, even though she lost only a few paintings. Loss has been the theme for many of her pieces, including one recent installation that repurposed a water-damaged painting.

“I think my work is autobiographical,” Gothard says in her home studio in Palm Springs. She is now living in an apartment with plenty of light and great views of the mountains. “And now, I’m in a good space.”

Gothard will bring her work into public view at Art Palm Springs, Feb. 17–19, at the Palm Springs Convention Center. Her art will hang in the Jorge Mendez Gallery booth.

She considers herself a lifelong artist, but Gothard puts her body of work into two categories: after college and after marriage and raising children. In college, her work had more of a surrealist style, but it has evolved into a mystical, or dreamlike approach.

The first thing you notice in her work is the strong architectural elements, including freestanding walls, beams, windows, and tile floors. “You see a lot of tile floors in the early paintings of the Dutch Masters,” she says. 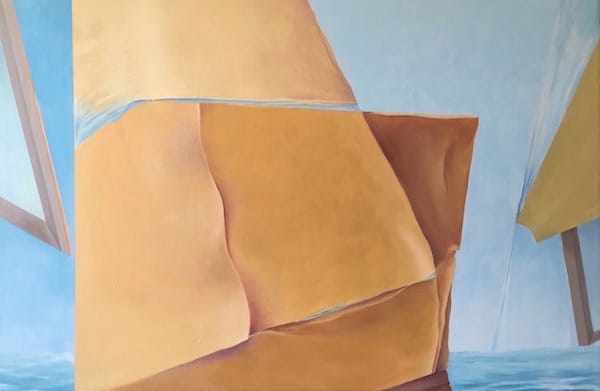 The sparse architectural elements look like beams from a construction site. Or they could be lines of repetition from temples and buildings she visited in Asia, South Africa, or the Middle East.

Another painting from the post–water damage series depicts two oversized onions suspended from beams painted at the top of the canvas, hanging over what could be water or air. “I was feeling raw after that experience and onions were the best image to express my feelings,” she says. “Little by little, I was peeling back the layers.”

“I’m sure these travels have influenced my work,” Gothard says. When she was traveling around the world, it was on business, but she was able to view a variety of artistic styles in museums, galleries, and even artist’s studios.

Early paintings had the architectural elements, but they also included a female figure. After the water damage in her home, Gothard slowly replaced the figure with an organic element, mostly flowers. “The living element is less defined, but it represents new growth,” Gothard explains. 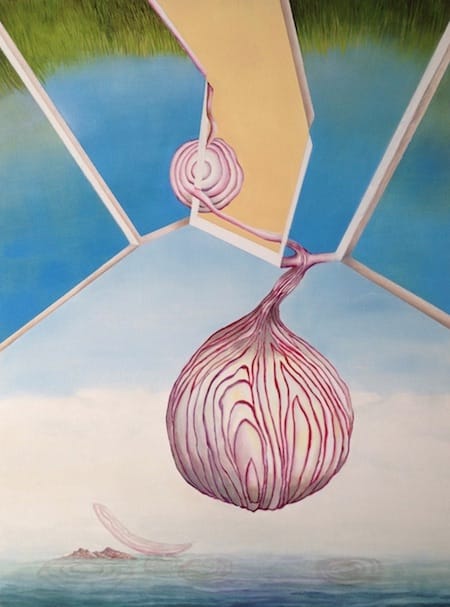 PHOTO COURTESY OF BARBARA GOTHARD
“I was feeling raw after that experience and onions were the best image to express my feelings. Little by little, I was peeling back the layers.”

The beams at the top represent a lifeline, she explains. The onions are twisted around them, hanging by a thread. The blue space that looks like water is actually air, while the ground is at the top of the painting. This juxtaposition leaves the viewer off-balance, yet in tune to Gothard’s state of mind at the time.

To come up with a complex composition such as this one, Gothard would previously begin by creating a series of drawings and then miniature mockups, a technique she honed in fine art classes at college. “It was a lot of work, but the major benefit is it’s easy now that I have the basics down,” she says.“It’s easy for me now.”

Gothard’s blooms are often pointed in a particular direction. Some look defeated, almost withered. Her parents were farmers, who also grew flowers for their own enjoyment. Because of her time in the desert, she includes desert flora.

In a recent tryptich, Gothard depicts a cactus flower off in the distance, enveloped by the barren landscape. In the second painting of the tryptich, the cactus flower is larger, with brighter colors. By the final piece, the flower overtakes the canvas, making up three-quarters of the composition in all its glory. 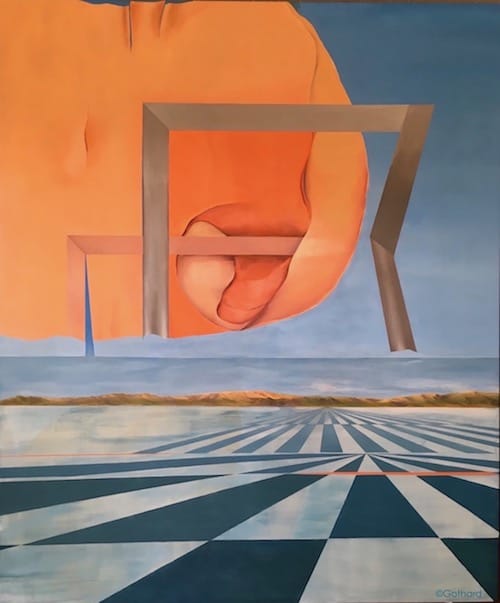