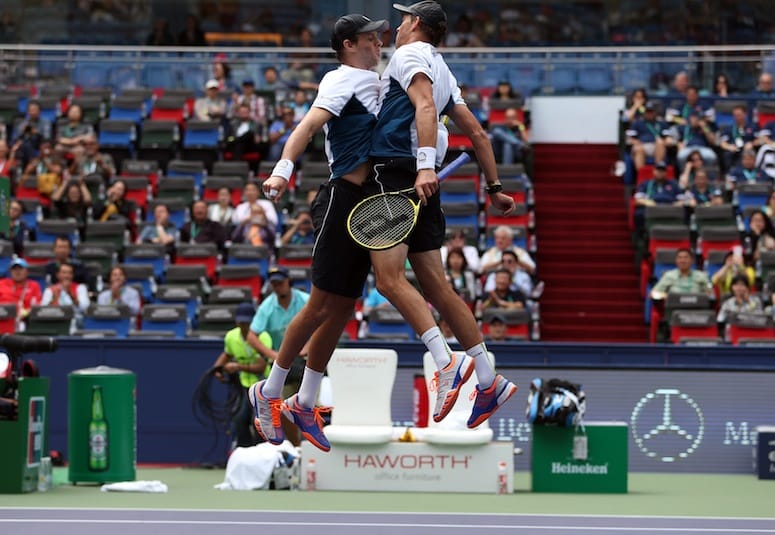 Barely indistinguishable from one another, save for a slight height edge to one and left versus right handedness, the California born and bred Bryan brothers are arguably America’s most popular twin tennis pros.

Armed with engaging personalities, sharp wit, and a killer win record with strokes to match, the identical brothers are the world No. 1 doubles team and reigning champions at BNP Paribas Open. In addition to aces, they also serve up some mean music with their Bryan Bros. Band featuring Bob on piano, organ, and keyboard bass, and Mike shredding on drums and lead guitar. Catch them performing on and off the court at this year’s BNP Paribas Open, March 9-22.

Palm Springs Life caught up with the dynamic brothers via email while they were on tour in Dubai and asked them about growing up with tennis, music, and each other as their primary playmates. Identical twins Bob and Mike Bryan are coming off a five-set victory over Britain's Jamie Murray and Dominic Inglot at the Davis Cup on March 7 in Glasgow, Scotland.

When did you first pick up a racquet?
Bob: Our parents had rackets and balls in our cribs so we pretty much started the day we were born.
Mike: And our mom actually played a doubles match at the club on our due date — and won — so we sort of feel we were playing doubles together before we were actually born.

What was it like your first time playing as a team?
Bob: We actually have always liked playing and practicing together, and we did it at a very early age. We were always doing things with balls and rackets before we could even walk.
Mike: We were playing and winning tournaments at age 6, and we have always played doubles together.

Do you fight on the court?
Bob: Most every doubles team does, but the thing about us is that 99 percent of the time we get along and work well out there together.
Mike: One of the huge keys to our success is that we have played together our whole lives and we get along pretty darn well most all the time. We are not perfect, but I agree with Bob, we do get along better than any team ever has.
Bob:  Our dad and mom always instilled that in us from an early stage. Dad often told us, 'You do not have to get along on the court — unless you want to win.' We always were super competitive, and we sure wanted to win more than we wanted to bicker.

You’re 36, how much longer do you think you’ll play professionally?
Bob: Two years for sure and maybe five more?
Mike: Yeah, we haven’t really decided yet. It is tough to retire when you are No. 1. Plus, we love playing on the tour and we like the lifestyle, the fans, and the competition.
Bob: And we enjoy the other players on the tour. They are all great guys and most have become friends.

Aside from the obvious synergy, how else do you benefit on the court as twins?
Mike: Some other players and some fans think we have mental telepathy and stuff like that, but really we have just played together since we were little boys and that is a huge advantage.
Bob: We are always comfortable out there together, and we know the shot that our twin will hit in any situation. We motivate each other and have good chemistry together.
Mike: Plus, Bob is a lefty and I play right handed, and the lefty-righty thing is a huge advantage for lots and lots of reasons.

When competing, what doubles team gives you the most trouble and why?
Bob: To be truthful, there are lots and lots of great doubles stars out there on tour who give us trouble. Daniel Nestor, Leander Paes, Bruno Soares, Alex Peya, Rohan Bopanna, Max Mirnyi, Juls Rojer, Horia Tecau, Aisam Qureshi, Marcelo Melo, Eric Butorac, and Jamie Murray.
Mike: Singles stars like Roger Federer, Rafa Nadal, Andy Murray, Lleyton Hewitt, Fernando Verdasco, and Feliciano Lopez also play darn good doubles. We apologize for all the guys we are leaving out. There are many more . . .

Describe some or one of your favorite memories at BNP Paribas Open.
Bob: I think Mike would agree with this, just going as little kids to the tournament [prior to BNP Paribas taking over as title sponsor]. Our parents would take us out of school for the whole week to see this amazing and exciting tournament. We would get up at the crack of dawn and sneak onto the courts and hit balls before our idols came out.
Mike: Then we would watch them practice and also watch all the matches all day long and into the evening.
Bob: And, of course, we would always get lots of autographs!
Mike: And, of course, winning the title here two years ago and then last year are big highlights for us.
Bob: Of course, maybe our biggest thrill was when we were rookie pros, Steve Simon gave us a wild card and we beat the No. 1 team in the world at that time, Pat Rafter and Jonas Björkman, in a close three-set match on the beautiful and intimate Grandstand court at the Grand Champions [Hyatt Regency Indian Wells Resort & Spa] site.

What do you like about the tournament?
Bob: The weather is perfect. The site is great with fantastic stadiums. Mike and I are both into landscaping and the grounds are beautiful! The best on tour really. It is truly a tennis garden. The desert is so picturesque with the palm trees and the surrounding hills and mountains and rock formations.
Mike: Tournament Director Steve Simon and Dee Dee Felich and their staff do a wonderful job on the event.
Bob: And they always get all the best players in the world.
Mike: So many great resorts to stay at. We always like staying at La Quinta [Resort & Club]. We are so comfortable there.
Bob: Easy to get around and no traffic problems. And lastly, the fans at Indian Wells are the best. They all come and stay for the week and make it their vacation. We are proud to say that we consider Indian Wells our home tournament.

When and why did you start the Bryan Brothers Foundation?
Bob: We started the Bryan Brothers Foundation about six years ago, and we are proud and happy to say we have donated now more than $600,000 to deserving kids and kids programs. We love helping kids in ways large and small.
Mike: Yes, we do it because it gives us a great feeling. Our main fundraiser is the Tennis Fest at the beautiful Spanish Hills Country Club [in Camarillo, Calif.] headed up by Dave McKinney. This year’s event will be on Sept. 27, and we will be playing doubles against John Isner. Last year we had Victoria Azarenka and the year before that Andy Roddick played.
Bob: We have been blessed to have so many tennis and entertainment stars in our event through the years like Andre Agassi, Maria Sharapova, Mardy Fish, Sam Querrey, Ricky Leach, Tracy Austin, Hank Pfister, Justin Gimelstob, Jeff Tarango, Tony Graham, Kaley Cuoco, Jon Lovitz, Matthew Perry, and on and on. We have also had top college players and top juniors helping out and last year, Kimberly Yee, the No. 1 junior in the United States, came out to play.