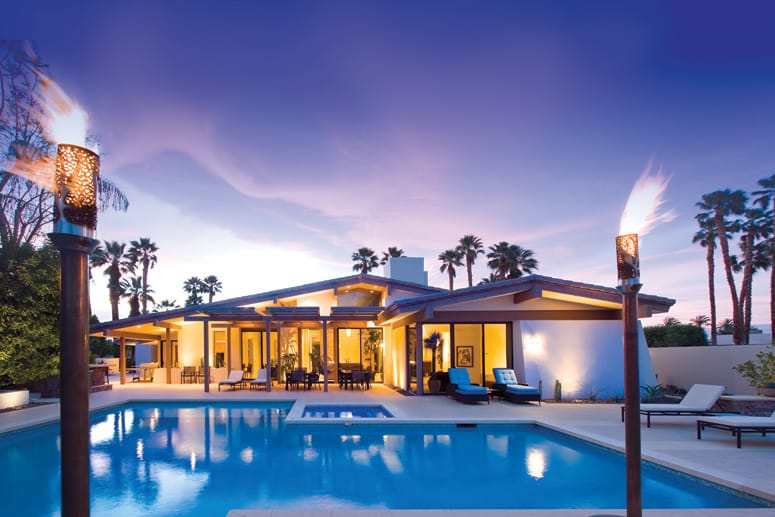 Home prices in the Coachella Valley are rising, leaving behind the recession, while offering an affordable alternative to Los Angeles, Orange, and San Diego counties. The median single-family home price in Riverside County in July 2013 was $294,300, compared with $421,350 in Los Angeles County and $675,000 in Orange County, according to the California Association of Realtors.

As the economy improves, demand for housing accelerates. In the first six months of 2013, the median price per square foot gained 23 percent over the previous year. Short sales and foreclosures are down 37 percent from the first half of 2013. Inventory has slowed, too. Builders have responded with 30 projects, totaling 5,467 homes, and have already sold 3,341, according to Market Watch LLP, a firm that analyzes residential housing in the Coachella Valley.

In Indio, the fifth fastest-growing city in California last year, 10,000 lots are ready for home construction; permits for commercial and residential real estate are up 50 percent over last year.

Occupancy Up in Commercial Spaces
While residential real estate picks up, commercial properties are also showing some muscle. Retail space vacancy is about 11 percent versus almost 13 percent in 2011, with office space at about 10 percent from about 15 percent in 2011, and industrial at 9 percent availability, down from almost 17 percent in 2010, according to NAI Capital.

CV LINK
By 2025, pedestrians, bicyclists, and electric vehicle drivers will have a 14-foot-wide, 52-mile-long trail connecting them to all nine Coachella Valley cities. CV Link will be a lifestyle “game-changer,” says Wesley Ahlgren, chief operating officer of the Coachella Valley Economic Partnership.

The link will run along Whitewater River, parallel to Highway 111, from Palm Springs to Coachella, eventually connecting to Desert Hot Springs and the Salton Sea.

Small sections of the trail are in place in Rancho Mirage, Cathedral City, Palm Springs, and Palm Desert; those portions will be widened in the next few years, and construction meeting national-standard sustainability goals will begin in 2015. The $70 million trail will showcase local history, public art, and Native American materials, and several electric-vehicle charging stations.

The trail will boost home values within .5 miles of the trail, ease congestion on Highway 111, stimulate tourism, provide a place to exercise, improve air quality, save fuel, and affect permanent job creation.