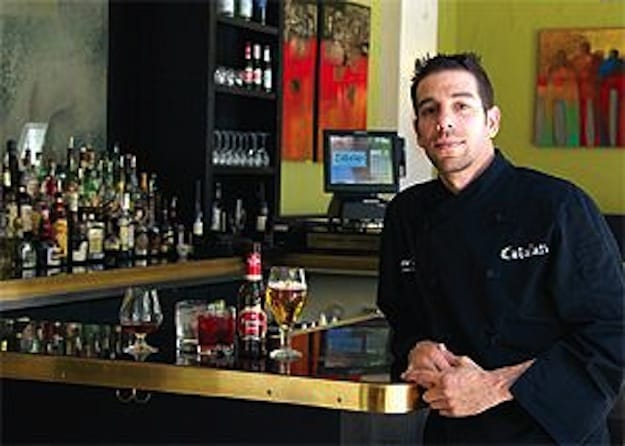 Business is Mark Davis, the patriarch of the Davis family, who was living his retirement out in the Coachella Valley after a successful career in the shipping industry.

Pleasure is chef Drew Davis, whose resume reads like a Hollywood Who’s Who list, but found his true calling in the desert.

The combination has created a Mediterranean cuisine that has been capturing appetites including a 2012 Diner’s Choice nod from OpenTable.com.

“We are both hard headed, but we don’t run into problems with that because we are managing our own aspects of the restaurant,” said Drew Davis. “He’s (Mark) is the business aspect, and I’m the food aspect.”

But even a business partner can’t stop being a father.

“I did give my business advice and guidance in the beginning,” Mark Davis said. “But I have stepped back and let Drew learn things on his own. That’s how he can be successful in his business.”

Catalan will celebrate its emergence into the desert restaurant scene by appearing at this weekend’s Food & Wine Festival Palm Desert. A year ago, the restaurant had just opened prior to the 2012 edition.

Drew had been working in Los Angeles as a personal chef for high profile celebrities. In the early 2000s, he worked as the executive sous chef for Nick and Toni’s in the Hamptons, creating dishes for celebrities like Mick Jagger, the Clintons, Tom Hanks, and Billy Joel. But something was missing.

“I could be making $300,000 a year in LA, but I chose the something I want to do,” Drew Davis said. “At the end of the day, you have to have the passion for what you’re doing or you won’t be successful.”

Catalan took root when the Davis’ found their location on Highway 111 in Rancho Mirage.

“The space is why we ultimately settled here (in Rancho Mirage),” said Mark Davis. “It’s very European in the middle of the desert.”

The stunning high ceilings and matching windows of the dining area set off the rich woods and simplistic décor. The privately walled-in courtyard provides diners the romantic experience of Catalonia, Spain.

The regular menu offers small plates and salads, a choice of two flatbreads, and the entrees range from veal Bolognese to grilled lamb chops to roasted Jidori chicken. There are also a special tapas and happy hour menu plus one for vegetarians.

Catch chef Drew Davis at 12:45 p.m. Sunday (March 24) creating one of his dishes on the Food & Wine Festival’s Stage 2 of Garden East under the white tent on Larkspur Lane and El Paseo in Palm Desert.