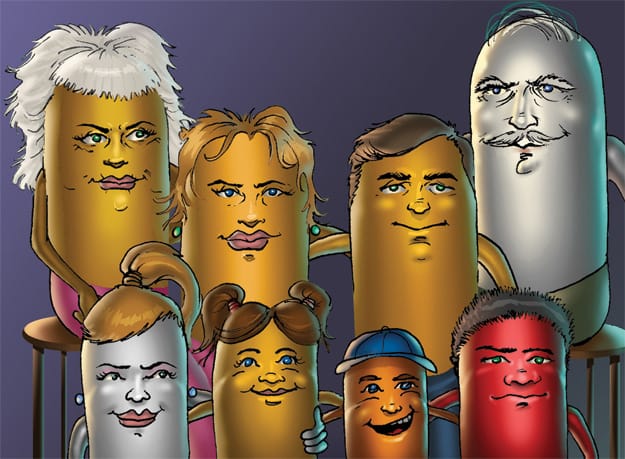 Wouldn’t it be great if you could ease stress, curb depression, improve your memory, and reduce your risk of heart disease without pricey prescriptions and pharmaceutical side effects? It turns out that often you can — and the key may be as simple as a bowl of bran flakes. Just as a nutrient-deficient diet can hasten the onset of sickness and disease, a diet rich in essential nutrients — especially B vitamins — helps keep you healthy, happy, and wise. While a balanced diet should include vitamins and minerals from A to zinc, when it comes to diseases-fighting fortitude, B vitamins lead the pack.

Researchers continually explore the myriad disease-fighting benefits of vitamin B. Promising studies suggest B-complex vitamins can ease the symptoms of medication-resistant diseases. In one Swedish study, 12 patients suffering from both fibromyalgia and chronic fatigue syndrome were shown to have abnormally low levels of vitamin B12 in their cerebrospinal fluid. Similar studies support the role a comprehensive B-complex supplement could play in the treatment of maladies such as these, especially when
combined with dietary and lifestyle changes.

Columbia University Medical Center in New York sponsored a 2007 study that showed folate (B9) might help in the battle against Alzheimer’s disease. People with higher levels of the nutrient from both diet and supplements displayed a lower risk of developing dementia. And in the Journal of the American Medical Association, Harvard University researchers tracked 80,084 female nurses over a 14-year period and found that women with the highest intake of folate and vitamin B6 cut their risk of heart attack or death due to coronary heart disease by as much as 45 percent.

A Finnish study found that high levels of vitamin B12 in the bloodstream were linked to more successful outcomes among people being treated for depression. The study tracked 115 outpatients who were seeing psychiatrists and therapists. Just over half of the patients were also taking antidepressant medications. When researchers followed up six months later, the people whose B12 levels were highest fared best.

Research on the health benefits of B12 is ample. One study conducted at the University of Oxford in England found that people who had higher vitamin B12 levels were six times less likely to experience brain shrinkage in old age, compared with those who had lower levels of the vitamin in their blood.

“Many factors that affect brain health are thought to be out of our control, but this study suggests that simply adjusting our diets to get more vitamin B12 through eating meat, fish, fortified cereals, or milk may be something we can easily adjust to prevent brain shrinkage and so perhaps save our memory,” says study author Anna Vogiatzoglou.

Family That Plays Together

The family of eight Bs works synergistically and is often referred to as “B-complex” vitamins. In fact, B nutrients are so interdependent that a deficiency in any one can lead to poor functioning of all of the others. B vitamins are also water soluble (meaning any excess is excreted in urine), so plan on replenishing your supply daily. Here are some facts to keep in mind:

• B supplements are best taken with food, as they can irritate an empty stomach.
• One or more alcoholic beverages per day depletes vitamins B1, B6, and folic acid.
• Those on high-protein diets have an increased need for vitamin B6.
• B vitamins support formation of the brain chemicals dopamine, epinephrine, and serotonin — all significant in mood stabilization and addiction resistance.
• Over-the-counter and prescription drugs interfere with B vitamin absorption. Common culprits include antacids,
antibiotics, and oral contraceptives.

From a nutritional standpoint, all of the Bs boast health benefits, but B12 stands alone in its reputation as an energy booster and disease fighter. A vital component in red blood cell production, it’s also proven to increase metabolism and promote weight loss.

Physicians administer B12 by injection to treat everything from fatigue and sickle cell anemia to circadian rhythm disorder and shaky leg syndrome. B12 also improves mental clarity and provides a steady stream of stamina; in some circles, B12 injections have replaced the ubiquitous afternoon latte as the pick-me-up of choice. Those with an aversion to needles and doctors’
offices can also get their B12 fix via adhesive patches, nasal sprays, and various energy drinks and supplements.

“The majority of adults we test for nutrient deficiencies have suboptimal levels of vitamin B12,” says Dr. Mark Stengler, founder of La Jolla Whole Health in La Jolla. Stengler, who is board certified in integrative medicine and certified in intravenous nutrient therapy, administers B12 via injection or intravenously to give patients a quick energy boost. “Most patients respond well, with initial treatments once a week for four weeks,” he says. “After that, we either teach them to do the injections themselves or offer sublingual supplements to help themmaintain their results.”

Stepping Up to the Plate

For most people, diet alone rarely provides optimal levels of B vitamins, Stengler says. “Adults over the age of 60 are especially prone to deficiencies, with common medications for high blood pressure and gastric reflux further interfering with B12 absorption,” he explains. “Published studies support the idea that B12 supplementation can dramatically decrease your risk of dementia, which is why I recommend B vitamin supplementation for seniors, in conjunction with health-conscious dietary changes.”

Take a critical look at your diet, since nutritional supplements should complement rather than replace a healthy diet. Vegans especially need to take heed; while a vegan diet tends to be rich in folate, it lacks B12, which is derived only from animal sources, so supplements are necessary. As far as how much of each B vitamin you need, milligram recommendations vary depending on your age, overall health, and whom you ask. Consult with a nutritionist and/or your personal physician before embarking on any nutritional supplement program.

There are eight members of the B vitamin family, identified by numbers and names from B1 through B12, which begs the question, “If there are eight B vitamins, why is there a B12?” It seems medical science named and numbered each B vitamin upon discovery, but some supposed nutrients were later dropped after being exposed as duplicates, leaving gaps in the sequence that were never amended. Here’s the full list:

To naturally boost your B intake, minimize processed foods and consume more whole foods, whole grains, and lean meats. Animal proteins like fish, chicken, and liver are excellent sources of B12, while leafy green vegetables and legumes are rich sources of folic acid. Other foods abundant in Bs: