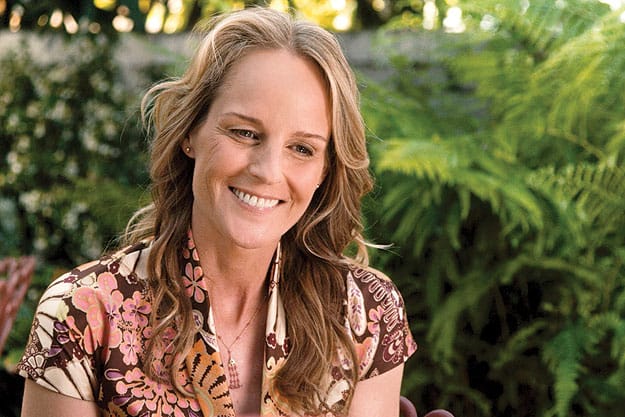 Helen Hunt was born in Culver City and, like all good Southern California girls, grew up coming to the desert for long weekends. She still visits, she says. “I love Palm Springs. I’m one of those people who is always cold, so I get out there as often as I can. What’s not to like about a place where it’s always warm?”

Palm Springs took on a greater dimension for Hunt in 2008. That January, the film she co-wrote, directed, produced, and starred in — a project she had given her life to for almost 10 years — had its world premiere on the opening night of the Palm Springs International Film Festival. Then She Found Me never made it big, earning mixed reviews elsewhere, but it was a festival smash and won that year’s Audience Award. “I was very honored to premiere the movie in Palm Springs,” Hunt says. “The festival is one that the industry watches very closely; and to have my film screen on opening night was huge.”

This month, Hunt returns to bask in the warmth of another film festival honor — the Spotlight Award — for The Sessions, an indie film that’s already generating Oscar speculation. (Past recipients include Amy Adams and Jessica Chastain, who both received Academy Award nominations the same year.) Hunt hopes that this second star turn at the festival will make it easier for her to find financing for another project that she’s been focusing on for the past few years.

“The good thing about how long it takes a movie to be financed is that it gives you the time to rewrite and make it better,” she says.

That movie, Ride, is “a love letter to Los Angeles and a comedy with a lot of pathos about a mother and son and how they navigate the separation they go through with his coming of age,” says Hunt, who wrote the screenplay and also hopes to direct and star in the film.

That triple role for her would be a reprisal of what she pulled off with Then She Found Me. The film was her directorial debut. She also starred in the movie, a melodrama about a New York teacher suffering a midlife crisis, and co-wrote the script based on a novel by Elinor Lipman.

Hunt grew up in Los Angeles and New York. She decided on an acting career early. By age 9, she had begun studying drama, had an agent, and had landed a role in the 1973 television movie Pioneer Woman. She worked steadily in television and made her feature film debut in 1977, turning in supporting work in several almost-forgettable films such as Peggy Sue Got Married and Mr. Saturday Night. Then, with her role as Jamie Buchanan on the TV sitcom Mad About You (1992-1999), she became a bona fide star, winning four consecutive Emmy Awards.

In 1996, she starred in the summer action blockbuster Twister, which became one of the top-grossing movies of that year. The next year, she won the Academy Award for Best Actress for her role in As Good As It Gets. Her co-star, Jack Nicholson, won Best Actor. In 2000, she returned to film with Pay It Forward, co-starring Kevin Spacey and Haley Joel Osment; What Women Want, co-starring Mel Gibson; Dr. T and the Women, starring Richard Gere; and Cast Away, starring Tom Hanks. She recently directed episodes of the Paul Reiser Show and Californication.

The Sessions is based on an essay, On Seeing a Sex Surrogate, by Mark O’Brien. O’Brien contracted polio when he was 6 and spent the rest of his life in an iron lung. Though he wasn’t paralyzed and could feel physical sensations, he couldn’t move his arms or legs or breathe on his own for longer than three hours at stretch. Hunt plays Cheryl Cohen Greene, the surrogate who helped him in his goal to lose his virginity.

“Cheryl is someone people might think they know,” Hunt says, “but she quickly defies your expectations. I called her to get a little help, not thinking that it would be much. In this case, not only did she have incredible information, but she also was so positive, upbeat, and strong. We talked about how she got to do this work. Growing up, she loved sex, but also had a family and a religion that shamed her about it. She felt alone and out of place. Thank God she got to Berkeley, where she was not only accepted but welcomed, where she could get training and certification and a lifework.”

The dynamic between O’Brien and Greene and the challenge of giving Greene her due as a professional drew Hunt to the film.

“Probably the rarest thing in my profession is a good story, and I thought this one was beautiful,” Hunt says. “It was bold and not like anything I’d read before. Cheryl is someone people might think they know, but she very quickly defies your expectations. She fired me up with her positive extroversion, her Boston accent, and the way she saw the world and sex in particular.”

One thing that surprised Hunt was how well the movie brought humor to such a potentially somber subject.

“The thing that I keep hearing in reviews is that it’s so serious,” she says. “What I’d love for people to know is how funny it is. There were times when it was shown at Sundance when you couldn’t hear the next line because the audience was laughing so hard.”

Originally titled The Surrogate, the film debuted at the 2012 Sundance Film Festival, where it won the Audience Award (U.S. Dramatic) and a U.S. Dramatic Special Jury Prize for Ensemble Acting. Immediately, Fox Searchlight Pictures snapped up the film’s distribution rights.

Hunt says she’s gratified with the reception her new film is getting.

“What makes this story unique is that in most real or fictional love stories, one person says ’I love you’ and the other responds with ‘I love you,’ and they go on to have a life. In this story, they have to heroically put their feelings in the proper place so the whole venture is not ruined. So they can give him a future. The overall spirit is that he was treated with kindness for the first time in his life and he was able to go on and have a real love affair, and we see this just beginning at the end of the movie.

“Like any work that means anything, this one asked for courage and vulnerability. It’s just this film asked for a little more than usual.”

The 24th annual Palm Springs International Film Festival will present Academy Award winner Helen Hunt with the Spotlight Award — given to “an actor or actress for extraordinary performance in the current cinematic year” — at its Jan. 5 awards gala at Palm Springs Convention Center.