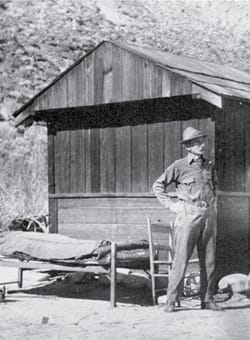 Palm Springs’ pioneering painter Carl Eytel and writers Edmund Jaeger and J. Smeaton Chase would object to the view Peter Wild sees near the base of the San Jacinto mountain range.

“Late in life, Jaeger wrote a foreword to his book about the desert in which he bemoans the ravishment of the desert by overpopulation. Eytel in his letters absolutely stormed about the population growth,” Wild says, looking down at the swimming pool and buildings of The Tennis Club. He stands where Jaeger built a cabin. Wild’s multiyear research pinpointed the site and culminated in a two-volume book.

A professor of English at the University of Arizona and prolific author, Wild recently completed a study of what he calls “an artistic phenomenon with national ramifications” that took place from 1915 to 1923. Volume I of News from Palm Springs: The Creative Brotherhood and Its Background profiles Eytel, the well-read and “sometimes cranky” German painter; the deeply religious Chase, a travel writer; and the 20-some-years younger Jaeger, a naturalist, teacher, and writer. Volume II comprises letters written by, to, and between what Wild refers to as the Palm Springs Brotherhood.

“This was not a formalized band with a manifesto or anything such as that, but a loose association [of men] with commonly shared attitudes and interests,” Wild explains. “[They] often traveled together, sharing hardships as well as the joys of the trail; and they felt a deep bond in their shared values, especially in their romantic view of nature.”

Wild believes these men have something to teach us today, through the way they lived: in one-room cabins, reveling in wilderness, and conveying through painting and prose the beauty of the natural landscape.

Wanting to understand these visionaries, Wild searched for the locations of the cabins where Eytel, Chase, and Jaeger sat and discussed art, literature, and their travels. His own exploration began somewhat serendipitously.

“Some years ago, I was doing research for several books I was writing about the Mojave Desert,” he says. “To get there from the University of Arizona in Tucson, my research assistant and I had to fly into Palm Springs. We liked the place, looked around, and became acquainted with Sally McManus and Jeri Vogelsang of the Palm Springs Historical Society. Then we heard about the treasure trove of Eytel letters at the Palm Springs Art Museum. It was like catnip to a cat for me.

“It took two or three years to research the background of the letters, write hundreds of footnotes, and do all the scholarly things historians are supposed to do. It was the hardest fun I’ve ever had.”

As for the homesteads, Wild discovered that Palm Springs in the early 20th century was dotted with cabins of “romantics escaping what they perceived as the evils of civilization.” In 1908, local pioneer Pearl McCallum conveyed 2.63 acres at the site of today’s Tennis Club to Eytel for the sum of $10. When Eytel died intestate 20 years later, the property was appraised at $750.

Among the Brotherhood, Eytel was the first to build a cabin — more specifically, a “tent house” with canvas for the top halves of the sides and the roof. Over the years, he converted his humble abode to an all-wood structure, but continued to eat and sleep outside year-round. Jaeger built his cabin south of Eytel’s and about 25 feet up the hillside. He built a second cabin, for some unexplained reason, in the same vicinity.

Wild was able to pinpoint the site of Eytel’s cabin at the end of Baristo Road based on old photographs and the legal description of the property. From there, based on Eytel’s letters, he tracked the location of Jaeger’s cabins. Chase lived “a few stone’s throws to the north of Eytel,” according to Wild, who also says the bright days of the Brotherhood ended with Chase’s death in 1923.

Construction of The Tennis Club began in the late 1930s south of where Eytel’s cabin once stood and expanded northward over the years. Several cabin remains were destroyed after the death of Pearl McCallum McManus in 1966 and purchase of the property by Harry Chaddick, “a go-getter developer from Chicago,” Wild says. “[H]e blasted away the side of that mountain and with it went cabin ruins.

“Chaddick knew darn well he was destroying cabin sites,” Wild continues.
“In fact, with great relish he tore down the nearby ‘Pink House,’ a beautiful Palm Springs landmark formerly owned by [Pearl McManus].”

Wild goes into more detail on the cabins in Tipping the Dream: A Brief History of Palm Springs, being released this summer.

“I’m pretty happy about discovering the precise locations of the cabins,” he says. “Really, though, it’s the idea of the cabins that’s far more important than identifying the precise sites. In fact, I shudder to think of someone putting plaques up saying, ‘This is the site of Carl Eytel’s cabin.’ That would be to cage the ghost. … For me, it’s enough to know where the cabins once were, to go there once in a while and look around, feel the place, and not make anything more, or less, of it than that.”

Carl Eytel was born in Wurttenburg, Germany, the son of a clergyman. After high school, he spent four years studying forestry. He was drafted upon graduation and immigrated to the United States in 1885. Employed by a German farmer in Kansas, he began drawing cattle.

Accounts of mountains and deserts lured Eytel west, where he carried sketchbooks on journeys through Arizona, New Mexico, and California. He particularly enjoyed drawing and painting palm trees.

After settling in a small cabin on the edge of Palm Springs, Eytel sold his canvases for anywhere from $10 to $50 and became known as a talented artist among visitors from around the world, many of whom were nationally celebrated artists and writers.

Besides exploring and painting, Eytel loved to read and possessed knowledge of classics and the best literature of his day. His typical attire was khaki pants, a corduroy jacket, and Stetson with a band of rattlesnake skin.
Eytel died of pulmonary tuberculosis.

J. Smeaton Chase was born into the literary world, as his father was a partner of a London publishing firm. But when he was 6, his father died; and a few years later, his nearly destitute mother began placing her children in orphanages. Chase spent five years — from 1873 to 1878 — in such an institution.

Suffering from rheumatism, Chase eventually came to Southern California for the warm, dry climate and became known as a travel writer. He held a variety of jobs while exploring the backcountry and then turned to writing for magazines. His first published book was Cone-Bearing Trees of the California Mountains.

At the age of 53, Chase married Isabel White and moved into a house at the west end of Arenas Road. He died six years later of heart failure.

Edmund Jaeger was born in Loup City, Neb., in 1887, the son of a banker of German ancestry. At the age of 5, he began reading and making crayon sketches of wildflowers.

Although he earned a college scholarship, an illness in the family required that Jaeger go to work. He passed a teacher’s exam and, at the age of 15, began his career in education.
After moving to Riverside in 1906, Jaeger won a scholarship to study medicine at the College of Medical Evangelists at Loma Linda and bicycled 22 miles daily for two years. Treks into canyons and mountains inspired his books based on his observations.

Jaeger took a job teaching in a one-room schoolhouse in Palm Springs (at the site of what is now the China King restaurant at Amado Road and Indian Canyon Drive). He subsequently took teaching posts at Riverside High School and spent 30 years as head of the zoology department at Riverside City College, retiring in 1952. He served as scientific consultant for Palm Springs Desert Museum and contributed regularly to The Desert Magazine.

To read a few of Carl Eytel’s letters from Wild’s book, click here.

click thumbnail below left to view the full photo and caption