When people laud the Coachella Valley’s architectural cachet, they typically mean its stellar concentration of midcentury modern buildings. But don’t give short shrift to its non-manmade bounty of statuesque and shapely cacti.

“I am sort of an architecture buff,” says Madison Offenhauser, a Palm Springs resident whose father designed the Conservatory and Chinese Garden at The Huntington in San Marino. “The structure of cacti and succulents has a super-interesting architecture and a simplicity of form. I also like the fact that they are easy on the environment and yet add so much to it aesthetically. They bring more than they take, which is something I believe in philosophically about life.”

In relandscaping their Indian Canyons home almost two years ago, Offenhauser and his husband, Hobie Sheeder, took a studied approach to diverging from the existing lawn and palms. They began by visiting nurseries from Mecca to Morongo Valley to familiarize themselves with cacti. To ascertain which species were most suited to their property, they asked questions about which were best in full sun, which produced flowers, and how fast they grew. 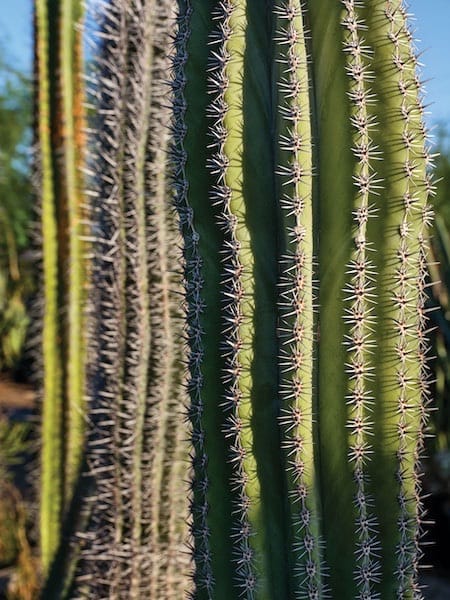 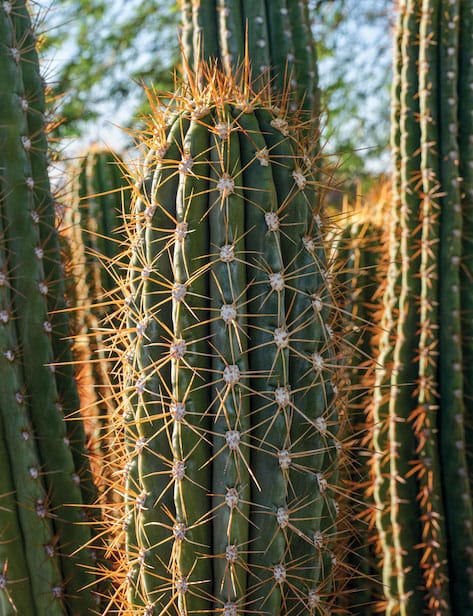 “We didn’t want an ‘overall’ installation,” Offenhauser explains. “We bought a few things we really loved and then bought more. We never bought based on just trying to plant something. We wanted what we connected with. We wanted it to mean something. We also were looking for a combination of seasonal attributes, so that our gardens are always balanced.”

Offenhauser and Sheeder obtained some of Mother Nature’s architectural gems from Cactus Mart in Morongo Valley, which has been in business since the 1960s and which Nicole Holland bought a little more than eight years ago after having worked on landscaping the golf course at Bighorn Golf Club in Palm Desert, taking plant science courses at College of the Desert, and co-owning Lotus Garden Center in Palm Springs.

“Bighorn was trending on cactus and native plants when other golf courses featured water-sucking plants,” Holland says. But it was with the nursery that she “became a complete nut with cacti and native plants.” Opened in 2009, Lotus Garden Center found its footing with a recessionary outlook when people began replacing annuals (“flats of flowers”) with plants that would “look great year-round.”

Because a majority of Joshua Tree National Park visitors pass it on the way, Cactus Mart attracts many tourists.

“A lot of Los Angeles and San Diego kids come and pack their cars [with plants],” Holland says. Patrons also include tourists from the East Coast, who fly home with 6- to 12-inch, bare-root cacti. Such transports are possible because, as Holland affirms, the resilient plants can go for days without water and even soil. 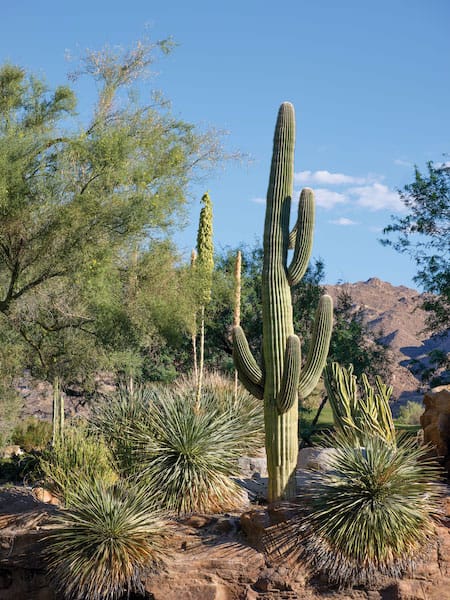 The Saguaro, native to the Sonoran Desert.

“I always get a question via email or social media,” she says. “Customers typically ask how to water cacti. The best advice I can give is to emulate the desert: hot, dry, sunny conditions and less water,” she says, laughing when recalling the query of a person from “WV.”

“Just put it outside,” she replied, assuming WV referred to the High Desert community of Wonder Valley, when — she learned — it meant West Virginia.

Ask someone to draw a cactus and they’ll likely sketch a vertical trunk with two opposing arms reaching skyward. In logos and fabric prints, the saguaro has come to represent some 2,000 types of Cactaceae and particularly the columnar Cereus genus.

“Saguaro is considered the king of cactus because that’s what people see in westerns,” says Rogelio Ramirez of Mariscal Cactus & Succulents in Desert Hot Springs, noting that nursery owner Francisco Mariscal has been collecting cacti for more than 30 years. Because people want them in their yards, local nurseries buy the protected native Arizonian plant from permitted sources. But the process, which includes inspections at the border, ratchets up the cost.

“A 6-foot saguaro costs $1,000,” Ramirez says, noting that Mariscal sells them in the 5- to 10-foot range. “You can get them smaller, but they grow one inch per year or sometimes not at all.” 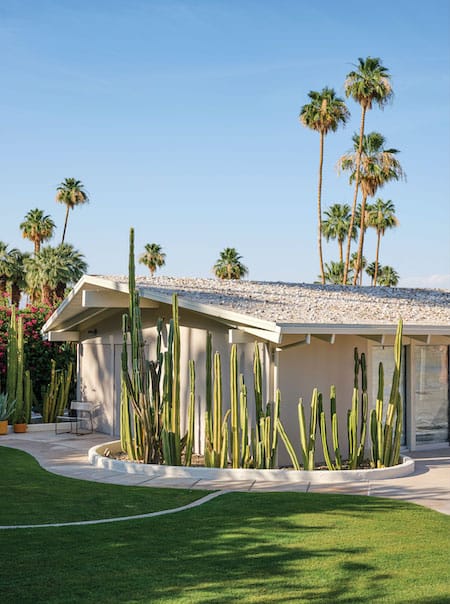 The Palm Springs home of Madison Offenhauser and Hobie Sheeder.

Cactus Mart imports saguaro but, Holland notes, “What we carry is not what you see in Bighorn, where they are 25 feet tall. That is a big undertaking and expensive. We usually carry 2- to 3-foot sizes. They’re slow growers and touchy. They don’t show signs of stress immediately, so you won’t know if one is on it’s way out until it’s well on its way out.”

Similarly, Ramirez notes that a cardón (Pachycereus pringlei) from Baja can grow a foot a year and bypass saguaros in ultimate height. He especially likes the senita cactus (Pachycereus schottii), whose mature stems grow a semi-soft “mane” that can be touched without the “ouch!” factor typically associated with cacti. To figuratively and literally round out a cactus garden, Ramirez recommends circular, ground-hugging barrel cactus, which he says also adds yellow to the landscape and “is really low maintenance — like a boulder.” 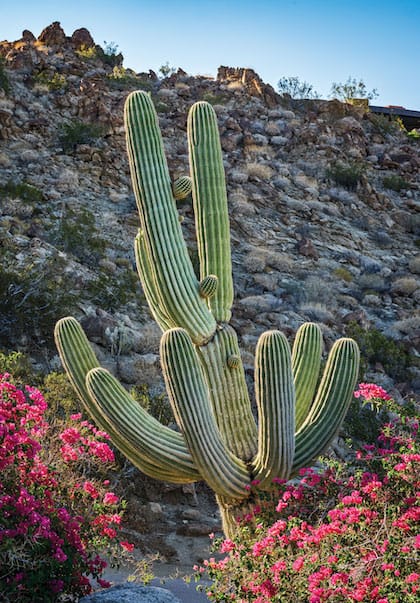 Given their structural integrity, cacti transform into otherworldly figures with Dali-esque shadows on stucco walls when properly lit at night. Just as they thrive with minimal water, they “shine” with a trace of electricity.

“A cactus doesn’t absorb light like broadleaf trees, so it doesn’t take much to light it,” says Jason Swearengin, who has designed landscape lighting for his own cacti garden and for his Absolute Electric clients.

He uses 2 1/2-watt LED lights on low-lying cacti and 7 1/2 watts on columnar species (9 watts on a big saguaro) in combinations of narrow flood or spot lighting, path lighting 20 inches off the ground to create soft pools of light (especially attractive for gatherings of flowering Echinopsis), well lights (level with the surrounding surface), and ambient up-lighting into trees to bounce light off their canopies.

Swearengin shares his favorite source for a warm glow: “A lot of LEDs are so white — almost blue — that they look unnatural. Soraa makes the best color-spectrum lighting,” he says, noting their color temperature of 2,700 Kelvin (versus the starker 3,000 Kelvin of many LEDs). 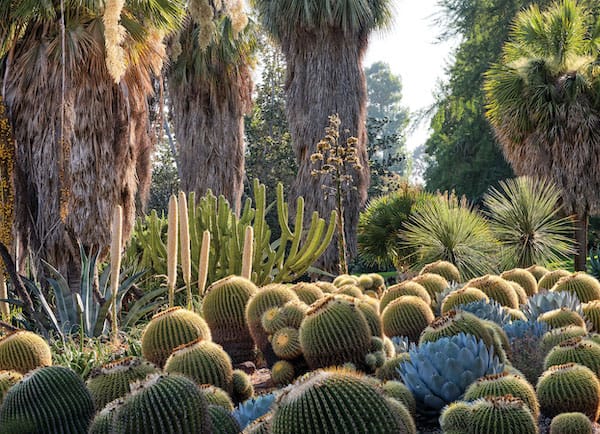 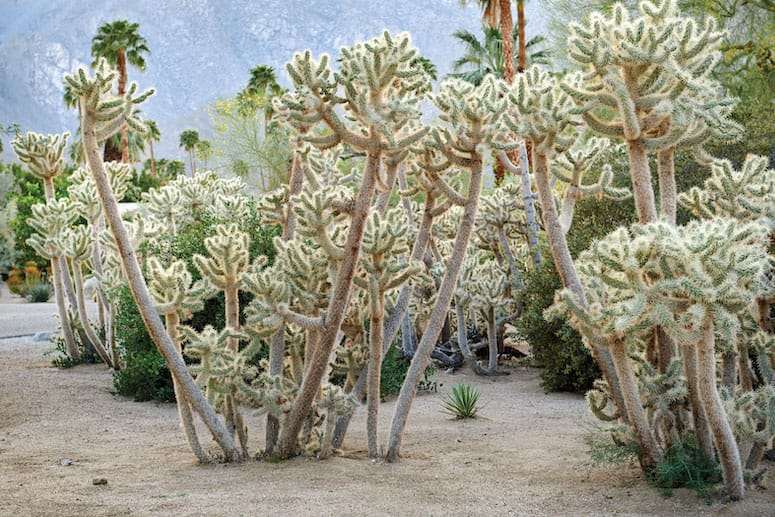 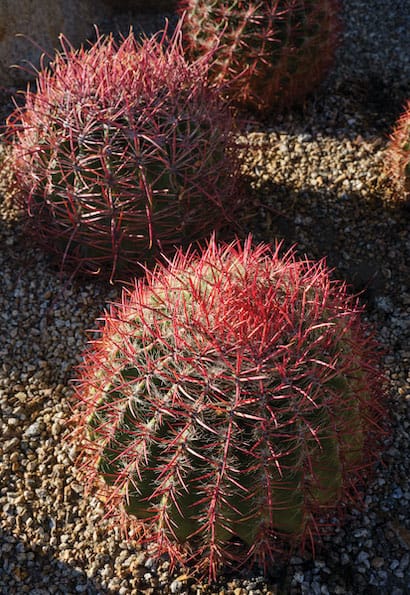 Bearing monikers like candelabra (or cathedral) cactus, cowboy cactus, pencil cactus, and vine cactus, some succulents masquerade as Cactaceae. What distinguishes cacti from its brethren succulents are not needles or thorns, but rather bumps called areoles, from which spines emerge.

Straight to the Point

Anything in the prickly pear family (Opuntia), which boasts not only colored blossoms but also blue- and purple-tinged paddles; Argentine saguaro/fat boy; torch cactus (Trichocereus grandiflorus); gray ghost organ pipe (Stenocereus pruinosus), which can have purple or red-edged ribs in addition to blooms

• Best for a Sculptural Aesthetic

• READ NEXT: Check Out the September 2020 Desert Living Edition.