The Cahuilla use a weaving process known as coiling, creating beautiful baskets out of various plants and grasses, including deer grass, sumac, and juncus. Serving both functional and ceremonial purposes in traditional Cahuilla life, these baskets provided ample inspiration for the Agua Caliente Cultural Plaza’s interior design.
PHOTOGRAPH BY ETHAN KAMINSKY

As the Agua Caliente Band of Cahuilla Indians continues to share its traditions and history with the public, it’s no coincidence that the new Agua Caliente Cultural Plaza, expected to open within the coming year, has Cahuilla culture woven right into its foundation—literally. Upon entering the new 48,000-square-foot museum, visitors will see a visual celebration of Cahuilla culture, starting with the bespoke terrazzo floors that weave traditional basket designs throughout the building.

“Basket weaving is central to Agua Caliente culture, so it was natural to incorporate and memorialize this in the design in some way,” says Scott Celella, principal and chief operating officer of JCJ Architecture.

Indeed, the practice of basket weaving has played a significant role in traditional Cahuilla life. As a rite of passage, elders presented young Cahuilla with their own baskets when they came of age. However, while baskets served a practical purpose, they also became important trade items, and these woven pieces share the stories of the Cahuilla people, often reflecting important cultural elements such as plants and animals, including birds and snakes.

Though the weaving tradition almost disappeared over the last century as the need for baskets diminished, this beautiful art form has experienced a resurgence in recent years, with many Tribal members learning how to weave their own baskets. So, it’s fitting that historical precious basket designs be incorporated, too, within the interior design of the Agua Caliente Cultural Plaza. 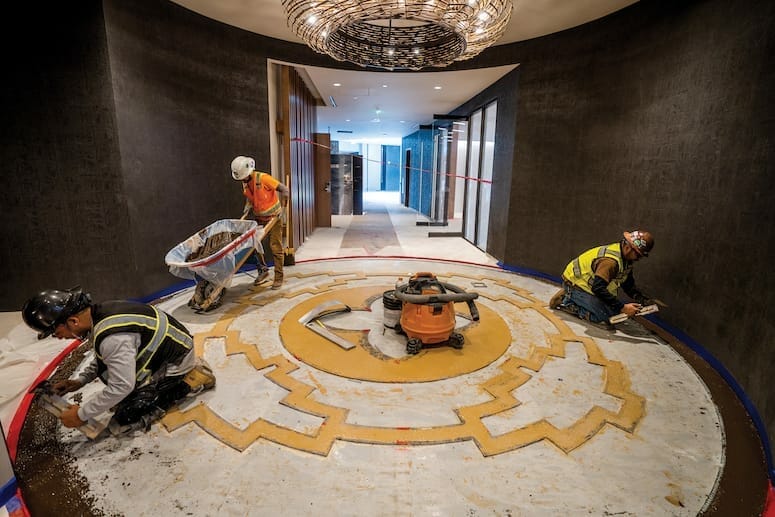 From Baskets to Flooring

Picking the perfect basket designs to share with Cultural Plaza visitors was no small feat, considering the intricate, unique, and varied weavings of most baskets. To start, the Tribal Council reviewed dozens of Cahuilla basket designs from the Tribe’s own collection. Ten were selected to inspire the final design for each of the terrazzo floor masterpieces found in the Agua Caliente Cultural Museum and The Spa at Séc-he at the Agua Caliente Cultural Plaza.

“Once we received these 10 options, we took them into computer programs to see which ones we could translate into line art,” says JCJ interior designer Emily Sise. “We asked, ‘How would the basket move? Could we get the certain curve, or point, that has been detailed within the actual basket?’ Once the baskets were solidified, we were able to give the designs to the terrazzo company, which then used the designs to create the terrazzo floors.” 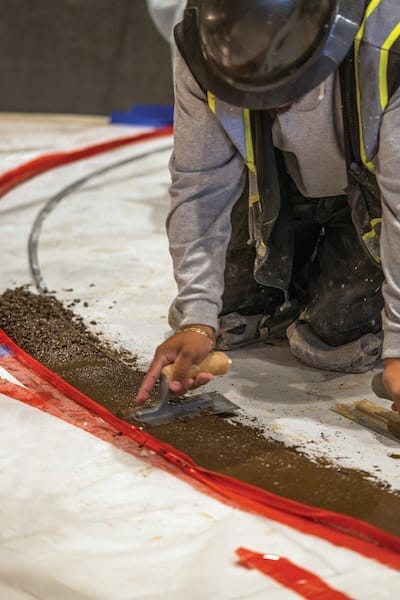 PHOTOGRAPH BY ANTHONY W. PURNEL
Workers trowel and smooth the cement-based material between metal trim pieces to ensure the mixture completely fills the space and there are no voids in the material as it cures.

“The Cultural Plaza’s architecture reaffirms the Tribe’s presence as stewards of the site, who offer the visitor a chance to participate in the culture.”

Though the Italians often receive credit for inventing terrazzo approximately 500 years ago, archaeological evidence suggests the material may have appeared in Turkey as far back as 8,000 B.C. Terrazzo flooring is known for its durability and often lasts as long as the building itself. As a composite material, terrazzo consists of chips of marble, granite, quartz, and glass and uses metal strips to make color transitions or decorative designs and patterns. It’s great for high-traffic areas. And, frankly, terrazzo never goes out of style. For this particular project, natural colors were chosen that reflected the actual baskets, omitting the iridescent chips used in a lot of terrazzo designs. The team also cooperated with the installers to minimize the amount of metal trim, which gives the floors a metallic quality that does not occur in the baskets themselves.

“The basket patterns had to be represented in a way that the terrazzo material could capture the essence of the pattern and still allow the changes in color to occur within the flooring,” Celella adds.

The result: floors that look and feel as if one were walking across Cahuilla baskets, immersing the visitor in the importance and beauty of this Cahuilla tradition. The patterns purposefully appear in gathering and pausing spaces—such as the lobbies and circular “nodes” that mark transitions to different parts of the building—where visitors will have the most opportunity to appreciate these masterpieces. 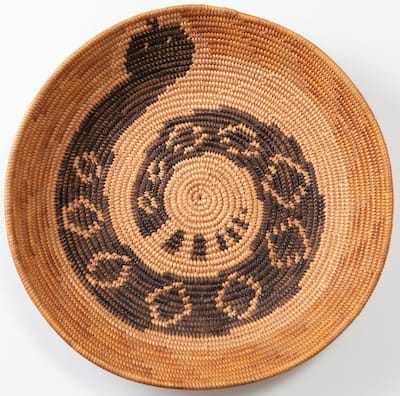 PHOTOGRAPHY BY ETHAN KAMINSKY
Intricate geometric patterns distinguished Cahuilla baskets as some of the most masterful in California. Many patterns incorporated elements from the natural world, such as lightning bolts, stars, eagles, and snakes (as shown here).

Culture and Tradition
Woven Throughout

The terrazzo flooring is only one aspect of the new Cultural Plaza that shares Cahuilla culture with guests.

“Incorporating nuances of our Tribal culture into the design of the Cultural Plaza is an important way for us to celebrate our history, traditions, and heritage and share those elements with our guests,” says Tribal Chairman Reid D. Milanovich. “Anyone who visits will begin to understand what is important to us: our baskets, our ollas, the desert landscape, the plants and animals, our creation and migration stories, as well as the bird songs that are still sung today. To see that and feel that, that’s where understanding of our culture really begins for visitors to our ancestral lands.” 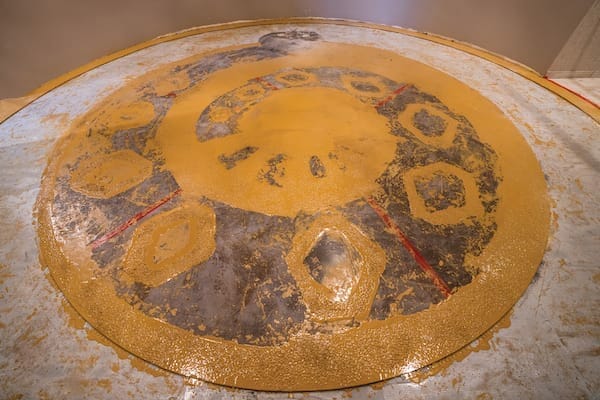 The main outdoor gathering plaza at the corner of North Indian Canyon Drive and East Tahquitz Canyon Way will also feature the Tribe’s logo basket design in concrete pavement, surrounded by Washingtonia filifera palm trees, the only native palm tree to the California desert. The Plaza’s Educational Garden will house indigenous plants that have played an important part in traditional Cahuilla life. 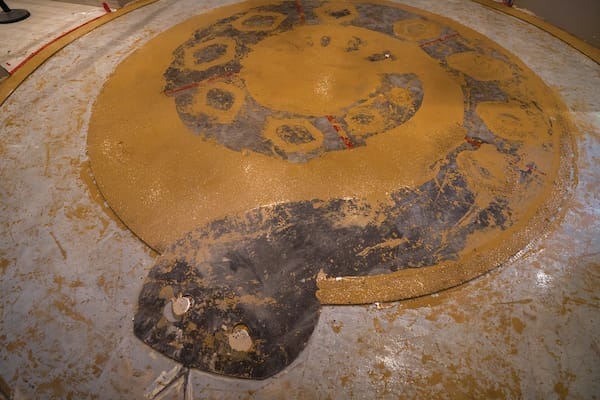 PHOTOGRAPHY BY ANTHONY W. PURNEL
An in-progress terrazzo floor at the Agua Caliente Cultural Plaza inspired by one of the snake patterns found on a traditional Cahuilla basket.

“The current architecture is an attempt to create forms that grow out of a desert landscape in shape and color,” Celella explains. “Given the long history of the Tribe and their openness in sharing access to Séc-he, a re-assertion of this outreach as expressed in the architecture represents an important departure from the previous ‘non-tribal, non-Native’ style of the original Spa Hotel. The Cultural Plaza’s architecture reaffirms the Tribe’s presence as stewards of the site, who offer the visitor a chance to participate in the culture.” 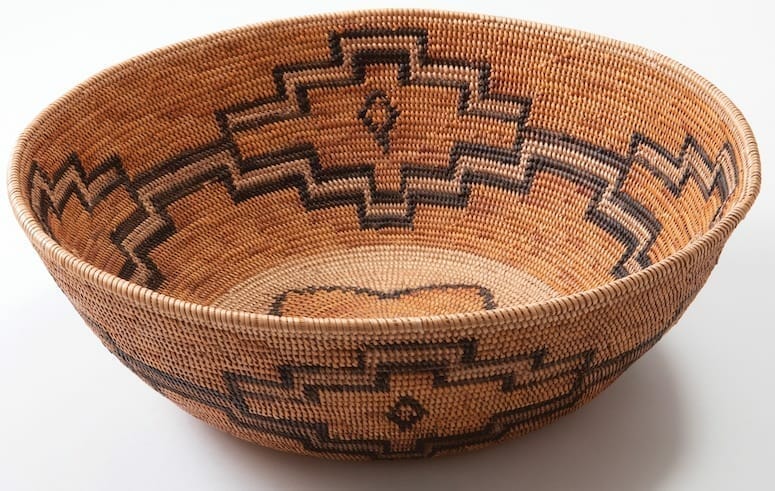 PHOTOGRAPH BY ETHAN KAMINSKY
Historically, baskets would have been used to hold food, but they also hold the stories of the Agua Caliente people.

An Open Invitation to Cahuilla Culture

Most importantly, the opening of the Agua Caliente Cultural Plaza—and the many intricate architectural details depicting and honoring Agua Caliente heritage—provides an opportunity for the Tribe to share its culture, history, and ancestral land with visitors.

“The opening of the Agua Caliente Cultural Plaza is a rare opportunity and truly healthy interaction between the Tribe and the world. The whole Plaza is an invitation to become immersed in the Agua Caliente culture,” Celella says. “There are lots of ways that hint at the elements of the culture that are important, and the encounter with the patterns is part of that immersion, the first hint that draws people in at the main gathering plaza that is then echoed in the lobbies and the nodes. There is a nice, recurring sense of invitation throughout the facility. The Plaza just states that there is Agua Caliente culture that exists in Palm Springs, and we are all welcome to learn about it and participate in it.” 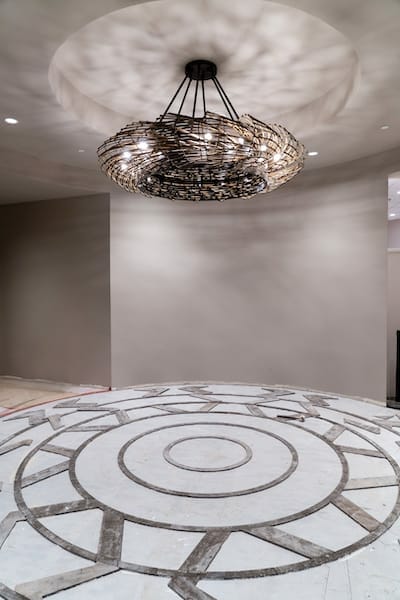 “When people visit our ancestral lands, whether it be the Indian Canyons or the Cultural Plaza, we are inviting them into our home, where our people have been since time immemorial.”

Tribal Chairman Milanovich likens the Plaza to being invited into an Agua Caliente home—and what better way is there to learn and understand one’s culture than with such an intimate invitation?

“When people visit our ancestral lands, whether it be the Indian Canyons or the Cultural Plaza, we are inviting them into our home, where our people have been since time immemorial. There is no greater gift than being invited into someone’s home,” Milanovich says. “The opportunity is to accept that gift and create a connection and understanding of who we are as a people.

The terrazzo floor designs come from our basket designs that are woven with the grasses that grow from the Earth on our ancestral lands,” he continues. “There are so many examples just like that incorporated into the design of our Cultural Plaza. What we are really trying to do is create that human connection with people from around the world, so they can better understand who we are, where we came from, and what’s important to us.”