It would have been fitting if longtime Angels’ baseball fans had gathered on the mound of Palm Springs Stadium on Feb. 24. One could have held up a sign that said “Ted Kluszewski.” Another “Buck Rodgers.” A third wouldn’t have needed a sign, just a cowboy hat.

Sixty years ago, on that date in 1961, the Los Angeles Angels opened spring training in that very stadium, which remains today a few blocks east of downtown. The franchise architect of this was Gene Autry, the “Singing Cowboy.” When awarded this major league franchise, he was asked where he would hold spring training. He replied, “There’s a nice little stadium in Palm Springs.” He didn’t mention it was called the Polo Grounds.

• See the Palm Springs Life Cover From March 1970 featuring the Angels. You Can Own It! 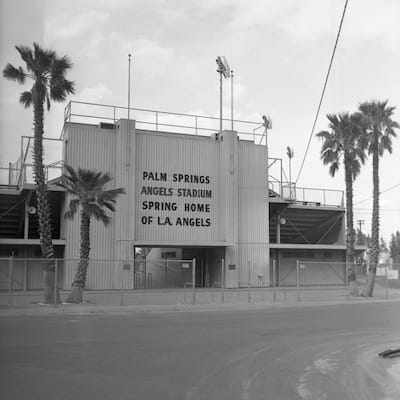 Autry loved baseball, but at a meeting of major league owners in St. Louis in early December 1960, his eyes were on business. His Golden West radio stations needed content, and baseball was expanding. Southern California would be getting an American League team, and Autry wanted the broadcast rights.

The leading candidate for ownership was Bill Veeck, a slick operator who once sent a 3-foot 7-inch person with dwarfism to the plate to draw a walk. Veeck owned several teams and sought minority ownership alongside his friend and principal owner, Hank Greenberg. But Walter O’Malley — whose Dodgers had arrived in Los Angeles in 1958 — had veto power over the Southern California market. Disliking the circus Veeck was likely to bring, O’Malley said no.

Baseball, looking for an owner, found one in the hall, waiting to talk about broadcast rights. Autry said yes, and the Angels were born.

Ross Newhan, who covered the team then for the Long Beach Independent Press-Telegram and later for the Los Angeles Times, says, “There they were, two months away from spring training, with no players, no manager and no site.”

Autry got the team on Dec. 6, hired Fred Haney as general manager Dec. 8, and Bill Rigney as manager Dec. 12. Two days after Rigney’s hiring, the Angels chose 28 players in an expansion draft and two days after that announced that Palm Springs would be its spring training site. Autry knew the Polo Grounds because, like so many celebrities of the day, he was a part-time resident of Palm Springs.

The first batch of players was to report Feb. 24. Buck Rodgers, a switch-hitting catcher who had been with the Tigers in the minor leagues, was the 12th pick in the expansion draft. He was thrilled to get this big-league shot. A midwestern kid, he had never been to Palm Springs.

“I landed at Ontario airport,” he recalls, “got on a bus and rode through a sand storm all the way.” Rodgers was there at the start — and at the end. When the Angels played their last spring game in Palm Springs, on April 1, 1992, before moving to Tempe, Arizona, Rodgers was the team’s manager. 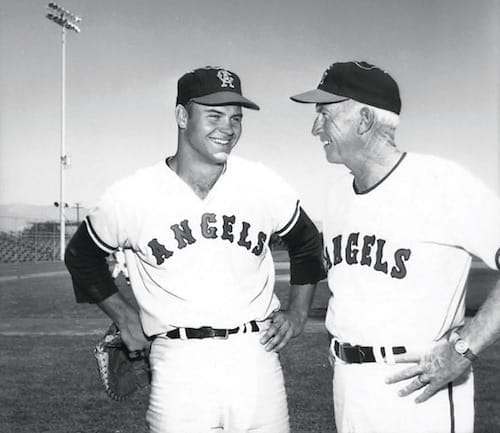 Rick Reichardt, who hit the first home run at the stadium, with Angels manager Bill Rigney.

“Bill Rigney said right away that he didn’t want us drinking.”

The Scene and Characters

The expansion draft left the Angels with mostly over-the-hill veterans or wide-eyed newbies.

There was Ted Kluszewski, aging power hitter; Dean Chance, potential star pitcher; Jim Fregosi, an unheralded infielder; and recognizable names such as first baseman Steve Bilko, infielder Ed Jost, and outfielder Bob Cerv. The first 10 picks the Angels made were pitchers, the next two catchers. They stuck to the basics.

One of the first players signed was a 5-foot-5 outfielder named Albie Pearson. He roomed with the hulking Kluszewski. As the story goes, Kluszewski, after a night out, came into their hotel room and stuffed Pearson into a dresser drawer.

Rodgers is 82 now, 22 then. “Bill Rigney said right away that he didn’t want us drinking,” Rodgers says. “So, I get to my hotel room, I’m rooming with Bilko, I walk in and there is my roommate and Kluszewski. They are filling the bathtub with beer. We never took a bath all spring.”

Newhan chuckles at the memory of Rigney going to check out a place called Howard Manor (now Colony Palms Hotel). “It had a dance floor and a bar,” Newhan says, “and as Rigney told it, he dropped by and all he saw were guys diving for cover.” 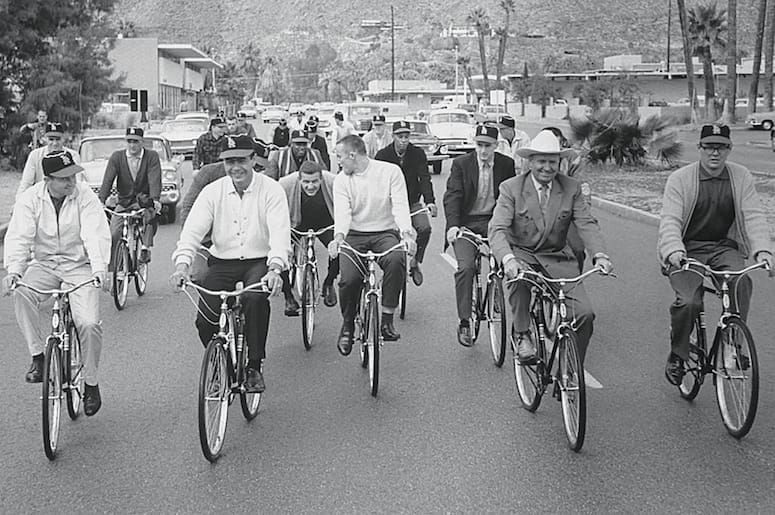 Angels players join singer, actor, and team owner Gene Autry (second from right) for a ride around Palm Springs in 1962.

Howard Manor was owned in part by boxer Jack Dempsey. He was one of many celebrities quickly adopting this new baseball team. Frank Sinatra and Dean Martin were around. So were Phil Silvers and Monty Hall.

“Desi Arnaz Jr. would play catch with the guys,” Rodgers says. “Gene Barry was there a lot, and so was Tab Hunter. It was a lot for a kid like me, playing baseball and looking into the stands.”

Rodgers says some of his best memories were hanging out with Charley Pride, “a pitcher with a below-average curve ball who was just a great guy.” Pride didn’t make the roster, but went on to international fame as a country singer. He died in December.

This was an era when newspapers were the bible and sportswriters were minor celebrities. “It was a great time in my life,” says Newhan, who eventually landed in the writers’ wing of Baseball’s Hall of Fame in Cooperstown, N.Y. “The access to players was always good in Palm Springs. One of the first press conferences was at the hotel pool. I remember, years later, when the Angels were still training there, spending hours just sitting and chatting with Nolan Ryan.”

Newhan says he showed up one day and wandered down to the Angels dugout. Sitting there was Dwight Eisenhower, who had completed his presidency a month earlier. “I just went over,” Newhan recalls, “took out my notebook, and started asking questions.”

Writers and readers were in need of stories, and sportswriters were legend-makers in those days. In their second year in the league, the Angels acquired a fast-balling kid named Bo Belinsky. According to Rodgers, who caught for Belinsky’s no-hitter in 1962, the newcomer’s nightlife reputation and press clippings exceeded his pitching skills.

“Belinsky was a product of Bud Furillo [legendary Herald-Examiner sports editor and columnist],” Rodgers says. “There were no superstars. These guys needed to make some.”

The players also needed something to stay amused, and they found it in a publicity deal Autry made with Schwinn bicycles. The players were told to ride the bikes from the Riviera Hotel (now Margaritaville Resort Palm Springs) to the ballpark. Schwinn took photos for its ad campaign.

“It lasted about three days,” Rodgers says. “Some of the bikes ended up at the bottom of Riviera’s pool.”

The Game of Firsts

On March 11, the city of Palm Springs flowed into the Polo Grounds for the first-ever Angels spring game. The home team won, 8–3. The next day, the Angels did it again, beating the Cubs, 12–5. Capacity was 5,181, and it was a tough ticket.

Of the 10 pitchers the Angels picked in their expansion draft, Eli Grba, a right-hander from the Yankees, went No. 1. He was on the mound in Baltimore for the first real game in franchise history. He allowed six hits, and Kluszewski and Cerv hit first-inning, consecutive home runs in a 7–2 win. Kluszewski drove in five runs.

A year later, Kluszewski was out of baseball, retired. Two years later, the Angels sold Grba to Hawaii of the Pacific Coast League. Grba fought alcoholism for years and died in 2019. Kluszewski died in 1988.

When the Angels celebrated their 50th anniversary in 2011, they invited Grba, then 76, to throw out the ceremonial first pitch. That day, he told Orange County Register reporter Marcia Smith of his gratitude at being invited for that moment and his regrets about his Angels pitching days.

“There were days I pitched,” he said, “when I didn’t remember how I finished. I’d go into the clubhouse and ask somebody, ‘How did I do?’“

The first Dodgers–Angels game in Palm Springs was on April 2, 1962. The Dodgers had been in L.A. for three seasons and already won a World Series in ’59. To them, the Angels were a nuisance, a team down the road in a suburb that took up some of their newspaper space. Little has changed since then — other than the fact the Angels play in Anaheim now. 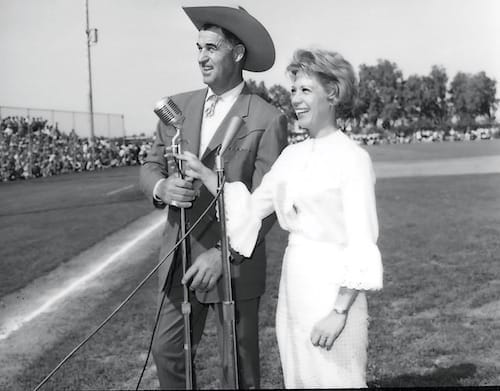 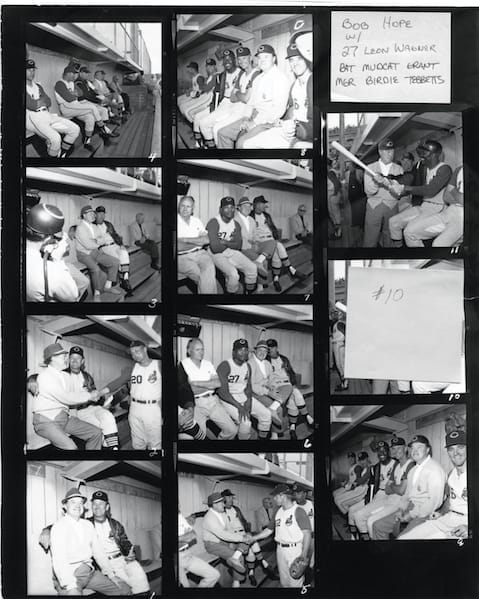 A sellout crowd of 5,181 showed up at the stadium. And the Angels did it again. Pearson, of all people, hit a three-run homer. In his entire major league career, he hit 28. He hit it off a pitch from Johnny Padres, the Dodgers’ star lefty, who was still in the game in the eighth inning of a spring game. That tied the score at 5–5 and the game was decided, according to the memory of longtime Coachella Valley resident and Dodgers right fielder Ron Fairly, when Fairly misplayed a line drive. The Angels won, 6–5.

The Dodgers shrugged and went on to Los Angeles. Rigney, the Angels’ manager, said, as quoted in The Desert Sun, “It was a great game to win. My players were anxious to beat the Dodgers. 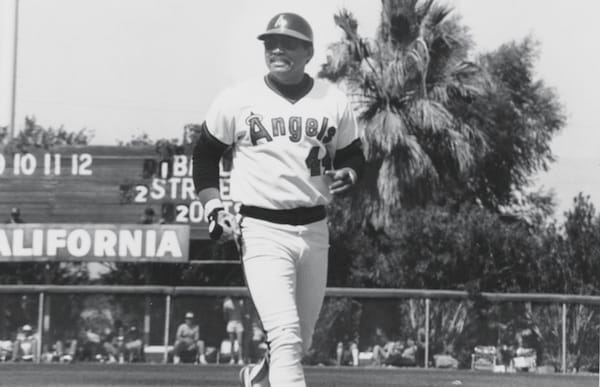 Reggie Jackson, shown in 1985, played five years for the Angels.

COVID-19 has taken its toll on both. The 2020 Power season never got off the ground, and neither did this year’s Winter League. Because of that, the aging stadium seems to be worse for no wear. A quick tour reveals rusting, paint-chipped 1950s décor. Locker rooms are narrow and cluttered. As you enter the Angels’ locker room, Nolan Ryan’s old locker is third from the right. Somebody’s dog has left a nearby statement that does not properly revere the space.

Starke, hustling to get his programs back into action in the face of the pandemic, understands the history surrounding him every day.

Now, the years and big-time baseball have moved on. On a recent warm winter day, perfect for baseball, the practice field behind the stadium’s centerfield is busy with activity. Half a dozen elderly women are doing pushups and leg-raises in the infield.

The Polo Grounds will be 72 years old this year. It was renamed Angels Stadium in 1964, then called Sun Stadium for a year in 1995. Now, it remains Palm Springs Stadium.

When the Angels left for Tempe, memories and a stadium legacy remained, as they do today. Palm Springs had hosted a stream of baseball legends, including its own superstars, such as Rod Carew, Reggie Jackson, and Nolan Ryan. Old photos retain the flavor of the day — Autry and his wife, Jackie, sitting in their seats above the Angels dugout, and Don Drysdale and Dick Enberg, broadcasting games shirtless in the topless press box. 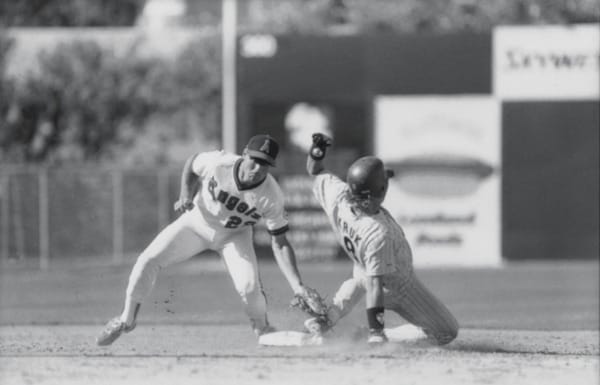 Shortstop Dick Schofield tags out an opponent during spring training in 1988.

The stadium is owned by the city and leased by Andrew Starke, who operates — depending on the pandemic — the Palm Springs Power collegiate league team and a Winter League instructional camp in January that attracts players who weren’t drafted by the major leagues or are late-bloomers.

• READ NEXT: Summer Baseball Finds a Home in Palm Springs During the 1930s-'40s.