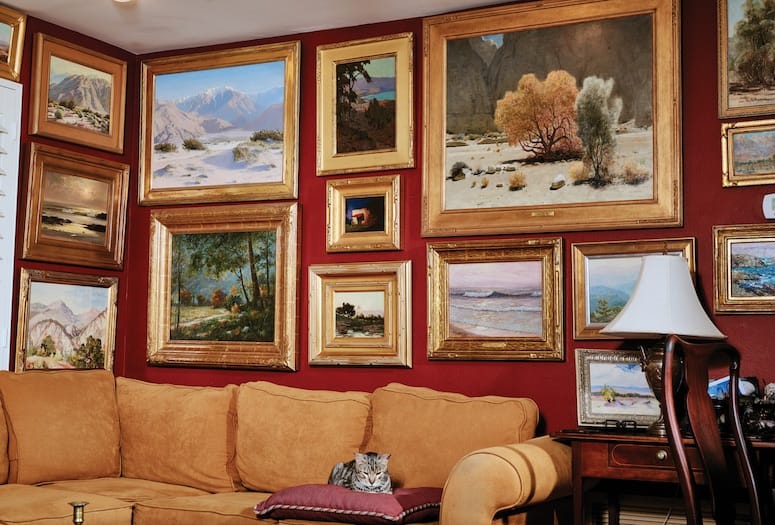 Michael Welch, a retired schoolteacher, stands before Early Morning, Palm Springs, California, a 1925 oil painting by Alson Skinner Clark depicting a brilliant cottonwood tree in a field of sand and creosote bushes, and his educator instincts kick in: “Notice the perspective,” he says, marveling at the scene’s distinctive slope. “And look at the saturation of the color on the mountains. And that light — that’s why we live in California.”

He and husband Lou Armentrout, also a former teacher, own about 125 (mostly) early California paintings, all hung salon style, one over the other, throughout their four-bedroom, 1970s Spanish Colonial-style tract house in the Los Compadres Estates neighborhood of Palm Springs. But Welch hardly contains himself around this canvas, which commands a central position above the mantel in the den. “It’s my favorite of all the paintings we have,” he says, “and it teaches well because it has this dramatic angle.”

Since moving to the desert in 2006, the couple have been busy selling their paintings by artists from Ohio, where they lived in a 1930s Greek Revival house in the Beechwold enclave of Columbus, to make wall space for early–1900s landscapes from one of the richest schools of American impressionism: California.

In the years leading to the 1915 Panama–Pacific International Exposition in San Francisco, American artists who had spent time in Giverny, France — ground zero for impressionism — returned to the United States seeking fresh sources of inspiration and a healthier climate. They came to California’s mountains, canyons, deserts, forests, and coastlines, forming artist colonies along the southern (Laguna Beach, Santa Barbara, San Diego) and northern (Monterey Peninsula) coasts and in the Coachella Valley desert.

Unlike East Coast impressionism, the California brand was decidedly bright, colorful, and upbeat — except for the canvases by Northern California’s tonalists and the Monterey nocturnes by Charles Rollo Peters, one of which hangs in the Armentrout–Welch collection.

By collecting historic paintings, Welch and Armentrout revel in preserving works by some of the most important artists of the period, including many who painted in the Coachella Valley, such as Agnes Pelton, James Swinnerton, Gordon Coutts, John Hilton, and Sam Hyde Harris. “Collecting is a way to continue the [California] story because so much of this beauty is disappearing,” Welch says. “There’s an exhilaration being with nature, and these paintings show the best of California.”

The Alson Skinner Clark painting is particularly special to them because it once belonged to Joan Irvine Smith, the late collector and Irvine Museum namesake, and they acquired it in an initially unsettling cash deal from a barely pubescent art dealer in a parking lot near The Abbey in West Hollywood.

“California was my Sunday idea. I wanted to make it my life.”

“He was a young chap who was finishing up a Ph.D. in art history, working at the Crocker [Art Museum in Sacramento], and trying to become an art dealer,” Armentrout recalls, noting that the deal began with a telephone conversation. “He wanted $12,000. I said, ‘We can’t afford that,’ and he said, ‘Well, make me an offer. We ended up at $7,000. He was going to be in Southern California, and we went to meet him on Christmas Eve.”

Armentrout laughs, adding, “He wanted cash, so we were in the parking lot with a stack of cash buying a painting from a stranger.”

The provenance showed the young dealer had purchased the painting at an auction in New York. The kid was all right and would later sell the couple a Theodore Wores canvas. Meanwhile, the Alson Skinner Clark painting proved a winner. Palm Springs Art Museum, where the couple volunteer as docents, borrowed it for a 2014 exhibition, A Grand Adventure: American Art of the West. “They gave it a wall to itself,” Welch says. “It looked so good.”

Christine Giles, the museum’s curator of Western and Native American Art, recalls, “I included Early Morning, Palm Springs, California as part of a group by California impressionist painters. Alson Skinner Clark was one of the plein-air painters who came to Palm Springs to capture the unique color, light, and topography of the desert, as seen in this work.” 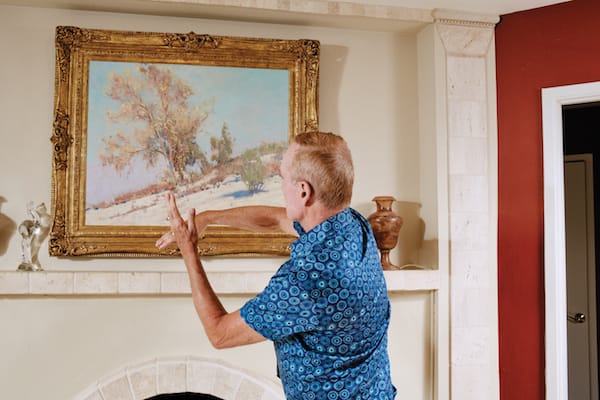 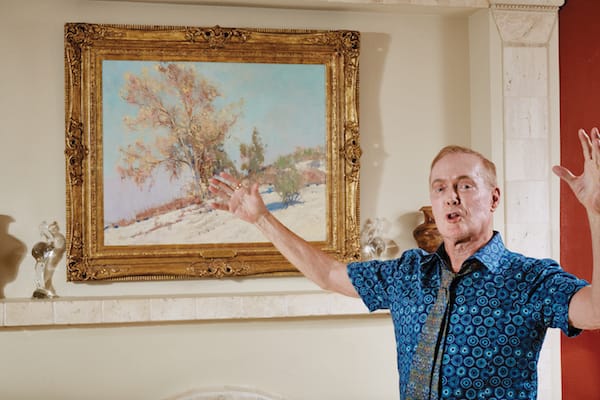 Collecting also propels the duo’s 46-year relationship. “We both came into this caring a lot about art,” Welch explains, “and we magnified each other’s interests.”

Armentrout, an emerging artist in his own right, was a teenager when, following his parents’ example, he began buying, restoring, and reselling mostly Victoriana objects. Later, he switched to 18th-century furniture. That’s when he met Welch. They were “poor teachers” when they bought their first painting for $150 (gold-leaf frame not included) — an 1888 canvas by Edward Parker Hayden that reminded them of their “Tom Sawyer youth in rural Ohio,” Welch recalls. “We both grew up in the unspoiled countryside, and when we saw this painting we thought, ‘That’s our childhood.’ ”

Their interest in paintings from this period intensified when they saw the 1994 Columbus Art Museum exhibition Triumph of Color and Light: Ohio Impressionists and Post-Impressionists. Armentrout refers to the exhibition catalog as “The Book,” as it provides a checklist of artists and a gateway to their paintings to research and acquire.

They collected Ohio scenes until California’s distinctive light drew them to the Golden State. “I’m weather depressive,” Welch says. “Ohio is an extremely gray place. Every time we came out here,  I felt great. California was my Sunday idea. I wanted to make it my life.”

When they relocated to Palm Springs, their collection also began turning to the West Coast, early on focusing on the California missions , including Mission Dolores by Gordon Coutts, Carmel Mission by Meyer Straus, and Mission San Juan Bautista by Geoffrey Holt.

The more they learned, they more they bought: California Poppies by Granville Redmond, Sunlit Forest by William Wendt, Early Autumn by Maurice Braun, Tuna Boats by Edgar Payne, and so on.

He and Armentrout seldom disagree about a purchase, but they did quibble while considering Twilight, Hope Ranch, Santa Barbara by John Gamble. “It was so dark, and it wasn’t cheap,” Welch says. “Luminescence is what draws me to paintings.” The fact that Laguna Art Museum once owned it helped convince Welch of its worthiness.

Now their greatest challenge, other than identifying more paintings to buy and sell, is fitting new acquisitions onto their full walls. They struggle to decide what to take down every time another canvas arrives. “It’s truly a puzzle,” Welch says. “But it’s part of the fun.”