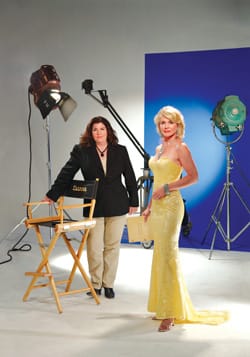 Leanna Bonamici and Denise DuBarry Hay on the set at Casablanca Studios in Desert Hot Springs.
Photography by Roger Robles

Many of us were disappointed last year when the television show Hidden Palms — whose pilot was shot in Palm Springs — moved to Phoenix after the show was picked up by the CW network. Although the series lasted only six weeks, those were six weeks of shooting that could have generated work for local residents who work in the film and television industry.

“We’re Hollywood’s playground,” says palm springs chapter, Denise DuBarry Hay, president of the nonprofit Palm Springs chapter of Women in Film and Television, adding that the first step in employing locals with production skills is compiling a database of who lives here and what goods and services they can provide. “That’s why we created psfilmoffice.com. We want people to sign up so everyone knows they’re here. We don’t want producers to think they have to hire the director of photography or the hair and makeup people out of Los Angeles. Using local professionals means they don’t have to pay travel and they don’t have to pay per diem. As a producer, I like that.”

Bonamici created the Coachella Valley’s first independent sound stage and production facility in a building that was once a post office and produces the local television show Two Forks Up, focusing on the local restaurant scene. Projects in development include an interior design show and a documentary on desert spas. She founded PSWIFT seven years ago.

“I was a big fan of the organization when I lived and worked in Los Angeles,” she says. When I relocated my business to the desert, I thought I should try to open a chapter of the organization here. The L.A. office was wonderful to work with; and in early 2001, we had our first networking breakfast with Tom Capra [son of legendary director Frank Capra]. It was a standing-room-only crowd.”

The international nonprofit has more than 10,000 members dedicated to empowering, promoting, and mentoring women who work in show business. According to DuBarry Hay, 5 percent of local members are men.

“In my opinion, it’s for the same reason women join,” she says. “You get to network and work with incredible, dynamic women who are interested in connecting and helping one another. You get people together with different talents, and they connect. Soon you see projects getting done by circles of people who were brought together by Women in Film.”

The organization maintains two Web sites. The first (www.pswift.org) focuses on the local chapter networking sessions, luncheons, and other events. But the organization’s most impressive accomplishment is www.psfilmoffice.com, a virtual film directory for production companies. Anyone who wants to mount a film or television production in the Coachella Valley can go to the site and find links to local equipment, technical personnel, talent, and support staff essential to filming. Local film professionals seeking employment can use the site to promote their availability.

Attracting productions to the desert and keeping local professionals employed are high priorities for DuBarry Hay and Bonamici, who work as producers on a regular basis. Bonamici says women tend to gravitate toward jobs as producers.

“The traditional thinking in the industry is that men direct and women produce, so there are more openings for women in production,” she says.

Yet the drive to succeed in show business can make women seem tougher than Joan Crawford. According to DuBarry Hay, women have to pave their own way.

“You work hard. Know what you’re doing, get educated, and continue to learn. You have to work harder than a man in most categories. Directors and assistant directors are over 90 percent men. … [I]n our group, we continue to reinforce supporting, mentoring, and empowering each other through connections. We have lots of members with strong connections to Hollywood agents or studio heads.

“But,” she continues, “there are still some things you need to make yourself successful that are not happening here yet. We really don’t have any strong theatrical agents or literary agencies. You have to go to New York or Hollywood for that.”

DuBarry Hay acted in film and television before transitioning to her current role of entrepreneur and producer. When advising her daughter, actress Samantha Lockwood, about a career in show business, she provided one specific instruction: “Don’t do it!”

Bonamici and DuBarry Hay laugh as the naturally protective mother modulates her own warning, “But if you have to, you have to. If you have a driving desire to do it, you must. But you have to be good, and you have to be lucky. As an actress, I turned down Charlie’s Angels, but I’m very happy with where my life has gone. I’m also pleased that my company pays for rent in the desert what it used to pay for parking alone in Los Angeles.”

Bonamici also sees advantages to living and working in the Coachella Valley — advantages that transform the grueling commute endured by most Hollywood executives into something quite different.

“My 35-minute drive from [my home in] Indian Wells to the studio in Desert Hot Springs allows me to visit clients on the way to or from the office. It’s a pleasant drive and an efficient way to take care of business,” she says. “Living in the desert lets me work in a way that is both rewarding and enjoyable.”