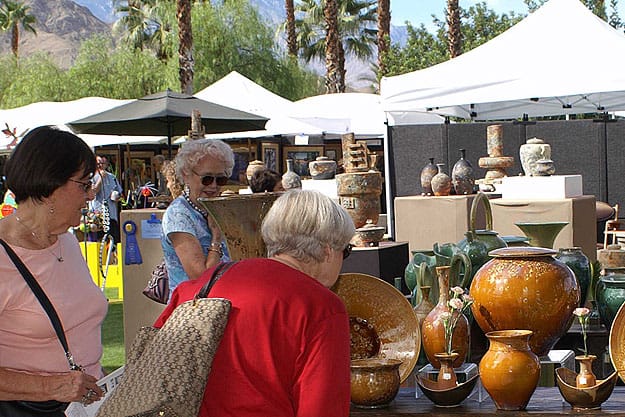 Rancho Mirage Art Affaire may be an art show, but it feels like a giant backyard party with toe-tapping jams and tantalizing tastes — and everyone is invited.

“You see generations of people, from retirees to families with kids in strollers, and everybody’s having a ball,” says Mike Schlange, one of the festival organizers from the City of Rancho Mirage. “It’s a fun, fresh, hip event. And it’s free.”

Displays of juried fine art from more than 100 artists and vendors pepper the rolling green lawns of the park. The festival is set against nature’s own perfect backdrop of towering palms and rugged mountains in balmy temperatures that hover in the 70s to 80s.

Watch artists create jewelry, ceramics, paintings, sculptures, and other pieces, participate in the artistic process yourself, and/or purchase one-of-a-kind works from the artisans.

“It’s a great opportunity for families to see different artists perfecting their crafts and getting to interact with them,” Schlange says. “Exposing children to the arts and music is important. It shows the arts are not lost.”

Attendees are further lured by the aroma of a smorgasbord of food prepared on-site by local restaurants. Beer and fine wine will also available for purchase. Enjoy your libation while strolling around to the sounds of live music from the festival stage.

Kids will thrill at recycled art activities with the Rad Hatter, or they can spend time with local sheriff and fire departments, who offer vehicle displays and photo opportunities.

A few surprises are in store this year, including patriotic-themed events, since the second day of the festival falls on Veterans Day. Make Way for Rhythm and Blues

Jazz has always been an Art Affaire hallmark. This year, however, festival organizers are spicing things up for the Sunday shows by introducing rhythm and blues acts for the first time.

“It’s a totally different flavor this year. The idea was to incorporate and introduce other types of music that are a part of our American culture and part of our pop culture,” says Mike Schlange of the City of Rancho Mirage.

Schlange called on Joshua Tree musician Solid Ray Woods to kick it off: “He’s local and he was tapped to be the first guy to play anything but smooth jazz at the festival,” Schlange says of Woods, who melds rhythm and blues, gospel, and soul. Woods will take the stage at 11 a.m.

Next up at 1:30 p.m. is the Bluz Soul Project, a Blues Brothers tribute band. “These cats are from Los Angeles and they are really hip,”  Schlange says.