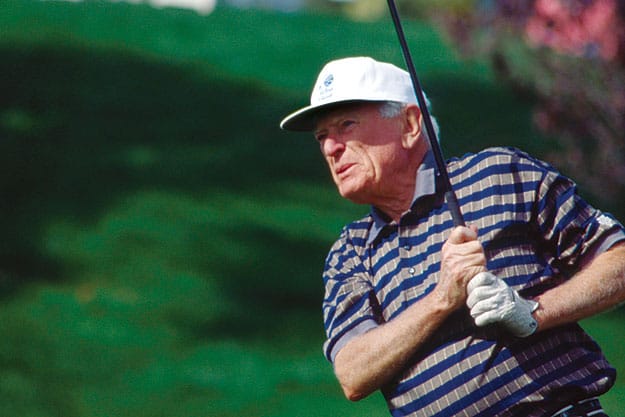 Jack Whitaker spent his youth in Philadelphia and saw most of the country — and parts of the world — during his career as a sportscaster with CBS and ABC. He was a play-by-play announcer for two NFL teams (Philadelphia Eagles and New York Giants) and covered three Olympic Games, but he became better known for his broadcast commentary on golf and horse racing. In the early 1990s, he married Wimbledon doubles champion Nancy Chaffee Kiner and settled in the Coachella Valley. Although Chaffee died in 2002, Whitaker returns to his Indian Wells home every year. Something about the desert keeps him coming back.

How did you develop an affinity for the Palm Springs area?
I originally came out here to cover golf tournaments. I covered the PGA Senior Tour at The Vintage Club way back in the ’60s. And I covered Major League Baseball [spring training]. I never covered the Bob Hope Classic, though. I fell in love with this area.

How much time do you spend in the desert?
I spend from Christmas to the middle of April in Indian Wells. I love the lifestyle; it’s very relaxed here. And the weather is the best thing.

You’ve covered a lot of golf, but do you play?
I try to. I play nine holes about three times a week.

Your handicap?
Oh, you don’t want to know.

What is your favorite course?
Oh, gosh, there are so many very nice courses here. And there are a lot of new ones. I play the Citrus Course [at The Citrus Club at La Quinta Resort] — the Pete Dye-designed course. It’s my favorite. It’s very flat. [In Pennsylvania] there are so many hills. The hills take it out of me. Citrus has nice vistas and is challenging for any player.

Where do you like to dine?
There are a lot of great places. I like Jillian’s in Palm Desert. And Cuistot [in Palm Desert].

How do you spend your free time here?
I like to read. Right now, I’m reading a book about George Washington. And I’ll read anything that comes out by Dan Silva or Alan Furst.