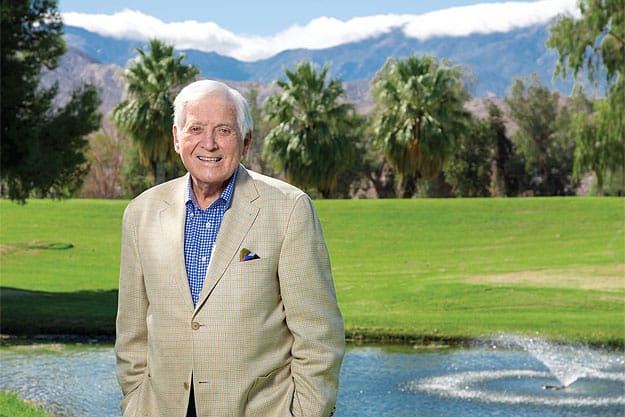 In November, Monty Hall taped the 50th anniversary show of Let’s Make a Deal, an occasion he calls “amazing, because I am only 41 years old.”

Hall, who is actually 41 plus 50 years old, jokes consistently through conversations. Some of his humor comes from his Canadian heritage; some comes from hosting a game show where contestants sometimes won a “zonk” (i.e., a goat instead of a car) and where people came dressed in crazy costumes to attract attention and be selected as a contestant.

The show even earned Hall a place in the world of mathematical probabilities, with a highly discussed paradox called the Monty Hall Problem.

Cathedral City honored its celebrity part-time resident by naming after him the street just east of City Hall. “A street is very nice, but I wanted them to change City Hall to Monty Hall,” he quips.

Local residents have seen Hall plenty of times besides on television. He has played in benefit golf tournaments, emceed telethons and fundraising dinners, and chaired Variety Clubs International. On Jan. 20, Indian Wells Rotary Club honors him in a tribute starring Jack Jones, Norm Crosby, and other entertainers.

Let’s Make a Deal was so ingrained in 1960s and ’70s culture that some films have used it to reflect those times in films. Why did it resonate so much?
No one had ever done a show in the audience; usually you had a stage. It was a show of gambling, risking, getting something less by going for an unknown.

Could you predict what deals people would make?
I think I became an amateur psychologist by seeing what choices they made. I learned what motivated them to make a deal. I learned that women were bigger gamblers than men on the show.

Would you make a good game show contestant?
I was a contestant on a show in 1946 called Treasure Trail in Winnipeg where they gave away silver dollars, and they asked me a question I could not answer for $10: What is a Scotsman’s favorite food on holidays? Haggis. I felt so humiliated.

You still own Let’s Make a Deal, so why is Wayne Brady hosting it instead of you?
I am too old to be running to the studio every day. I stopped doing it in 1991. I go to the studio once a month and give them all kinds of notes that they pay no attention to. But I don’t mind. Everybody wants to reinvent the wheel. Wayne is excellent.

You and your wife (of 65 years) Marilyn have a home in Beverly Hills, had one home in Malibu, and bought homes here for relatives. Why did you need your own home here?
An executive at Warner Bros. invited us to Mexico to stay in the Warner home. The day before, the trip was canceled because he had appendicitis. I said, “We’ve carved up this week. Let’s go to our place in Malibu.” Marilyn said she’d loaned the house to a recently divorced friend. I said, “OK, we’ll stay with dad and mother.” But other family members were staying there. We didn’t have a place to go. So we bought another house: this one.

What was your golf handicap, and do you still play when you come to the desert?
My best handicap was 12. I even played in tournaments that didn’t have celebrities attached them. I golfed until I broke my hip 10 years ago. Now it’s movies and dinners.