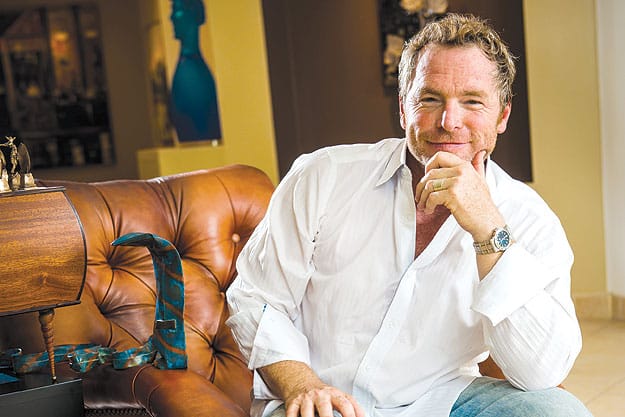 Tim Shockley always smiles — and not in a way that makes you wonder what he’s thinking. “I’m a happy guy,” the Palm Desert artist says. “I’ve been lucky in life.” Shockley, an Indio High School alumnus, has found his groove in a series of work called Loose Ties, which he shows at J. Willott Gallery on El Paseo. We caught up with Shockley after he returned from Laguna Beach, where he has a long relationship with the Festival of Arts.

What triggered the Loose Ties series?
The ties were a breakthrough. I was given a blank white tie to create a piece of art for a charity auction. I wanted to approach it on a sculptural level. The shape of the tie reminded me of a cobra skin that my father brought back from Indonesia. I put a wire through the tie to make the first piece. Then I figured out how to cast them in bronze.

The sculptures make you think a bit differently about ties.
Yes, they’re manipulated in ominous serpentine poses. You wonder: Are they there to protect your interests or to devour you? Ties are weird — often a façade. They used to command respect, but not always anymore. A murderer caught running naked through the street will show up in a courtroom wearing a tie. Ties can also be fun — with polka dots, stripes, and patterns. Each piece demands its own response.

What other projects are you working on?
I want to focus on large public pieces like Tree Huggers — life-sized, stainless steel figures. As a tree grows, the bark wraps around the figure’s arms and makes it look like it’s squeezing the tree. I also revisit earlier series. The more you know about materials, the more freedom you have in your creative process. So I refine older ideas, such as Tempus Fugit (Time Flies) — large-scale totems with a modern, manmade exterior and an interior that encapsulates bronze elements, such as fish bones and fossils.

What’s your relationship to Laguna Beach?
I spent my whole life between Laguna and the desert. I’ve been participating with the Festival of Arts on and off for 12 years. It’s a good show to get work seen: 3,000 people a day, seven days a week for two months. I also organize a show of youth artwork for Orange County students. As schools cut art, we fill in some of the gap. It’s nice to give back to the kids, and they get so excited by it.