Candice Held: “What I love about living here is that there’s inspiration everywhere you look.”
PHOTOGRAPHS BY ASHLEY LAPRADE

It could be said that style is derived from a blend of behavior and environment. In that light, Greater Palm Springs has carved out a signature look — for everything from architecture to fashion — that’s inarguably affected by the starkly beautiful landscape, the heat, and the accompanying way of life.

However, it could also be said that it is the people themselves, and their stories, that give the desert its flair. Here, three trendsetting locals share their approach to style through the desert lens.

Candice Held has forged her own path to a thriving career, often with unexpected twists. It’s impossible not to note the influence her experience as a dancer has had on her, from the way she carries herself to the designs she makes for her eponymous clothing label. “When you’re a dancer, you study the body,” she says. “You have an appreciation for the human form.”

After an injury prevented Held from dancing professionally, she began designing clothing, serendipitously discovering her trademark look when she tossed a few thrifted vintage scarves onto a chair and noticed how well they went together. “I started draping them on my dress form and came up with my signature silhouette,” she recalls. “It was before people were wearing a lot of print, but I was mixing plaids, florals, whatever. I loved it.”

With pieces that attracted the likes of Beyoncé and Halle Berry, it was clear Held was onto something. Over time, her process shifted from upcycling vintage scarves to designing custom prints.

The designer has never lacked for ideas, but upon moving to the desert with her husband, she discovered an endless wellspring. “Part of what I love about living here is that there’s inspiration everywhere you look,” she says. “It’s easy to recharge. There’s a feeling that’s both energizing and calming.”

Held, 44, has taken a holistic approach to design, expanding to home items that have garnered the attention of heavy-hitters such as interior designer Martyn Lawrence Bullard, who sells her home collection exclusively under his umbrella. “If you’re someone who is inspired by beauty, you want every aspect of your life to be cohesive and beautiful,” she says.

It’s not just the desert aesthetic that inspires Held, but the locals and passers-through, too. “It has been really exciting to see so many types of people put my clothes on and feel beautiful. We hear so many negative comments from women about themselves and their bodies — when you’re able to turn that around, it’s the best feeling. We need more of that.”

Although only 24, Kavita Mehta is no stranger to the impact of style. Her family’s business, El Paseo Jewelers, has been a cornerstone of El Paseo in Palm Desert since 1998.

“When I was growing up, my dad and uncle would have my sister and me sort precious gems by color, similar to how other kids played with marbles,” Mehta recalls.

With family ties to the diamond industry dating back 10 generations, Mehta might have been expected to follow directly in her predecessors’ footsteps. “My dad is the most amazing person I know,” she says. “He told me to chase my dreams above all else.” She took that sentiment to heart, pursuing her passion and earning her master’s in Shakespeare at Queen Mary University in London. “A lot of today’s story plots can be traced back to Shakespeare — so why not study the source?” she says, citing A Midsummer Night’s Dream as a favorite. “It’s quite modern for its time, and there are so many strong female characters.”

Mehta has become known as the face of El Paseo Jewelers. She balances these duties with her work as a producer for KMIR. “The desert is such a unique, special place, and working at KMIR allows me to showcase what it has to offer.” She finds desert style equally unique. “You’re allowed to be yourself here — but it’s important to always look presentable. Personally, I think there’s something empowering about a pretty dress, but I also love a good menswear reference.” 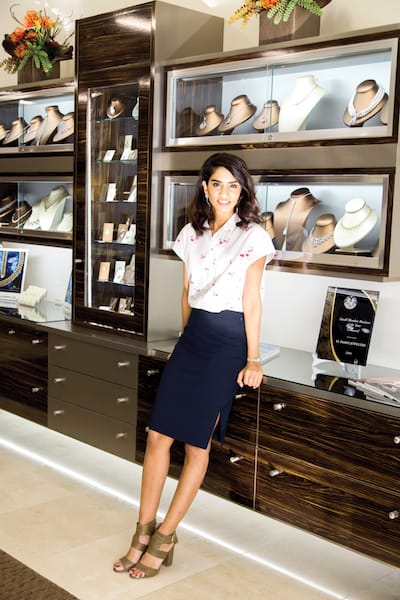 “You’re allowed to be yourself here — but it’s important to always look presentable."Kavita Mehta

As an ambassador of El Paseo Jewelers, Mehta takes pride in making everyone feel welcome and finding ways to give back to the community, which is her favorite part of the gig. “This community has given so much to us, and it’s important to reciprocate that.”

Fashion has been in Trish McFarlane’s blood for generations.

“My parents were clothing manufacturers, and I was sent to textile school,” explains McFarlane, owner of BB.one at The Gardens on El Paseo. After moving from her native Austria to South Africa, she started a family and opened her first retail stores with her husband. The couple eventually settled in Palm Desert.

“It was a bit of a culture shock to come to the desert from South Africa. I cried many tears that first year, but it’s changed a lot in the past 31 years.” Part of that change has been the area’s increasing expression of style — an aesthetic McFarlane has helped define for her customers. “I come from a background where people are always properly dressed, so I wanted to create a sense of taste. But it’s also the desert,” she says. “Everything is different. I don’t think I ever wore the clothes I [brought with me from South Africa] again once I got here.”

Her boutique has become something of a mecca for desert fashion, with some regular customers dating back to the grand opening three decades ago. “The clientele is the core of my business,” she enthuses. “I wouldn’t be where I am without those special people.”

McFarlane, 65, plays a large role in Fashion Week El Paseo, having been involved since the very first conceptual meeting. “The mood is the most exciting part — the buildup, the conversation. People look forward to it,” she says.

The lifelong entrepreneur has sage advice for the next generation of creatives. “Don’t rush into things. Sit back. Watch. Learn the environment, even if you’ve been successful elsewhere. My dad always used to say, ‘You can buy anything, but you can’t buy experience.’ ” 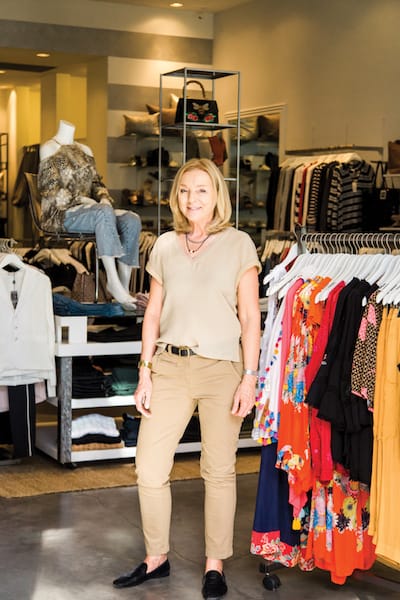 “I come from a background where people are always properly dressed, so I wanted to create a sense of taste. But it’s also the desert."Trish McFarlane