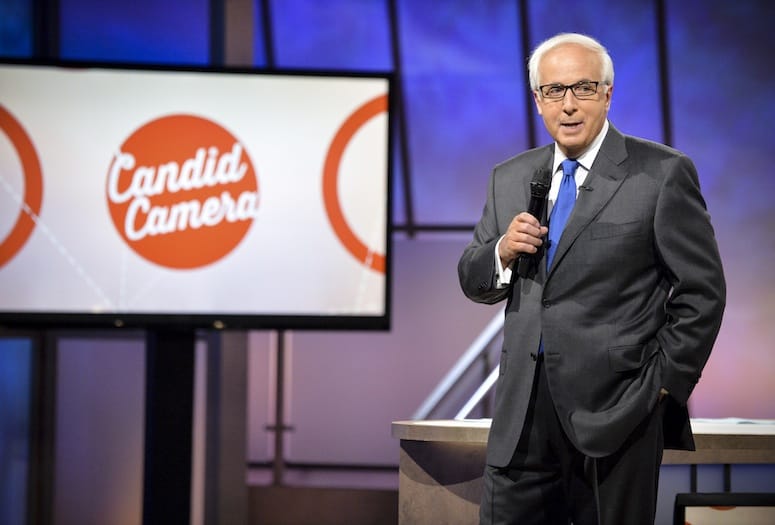 Peter Funt took up the torch lit by his father, Allen, with the reality comedy show, Candid Camera.
Photo courtesy of Candid Camera

There was a time, way before the “selfie” and the daily paranoia that your friends or family members might post your dance moves on “YouTube,” a hidden camera and practical joke television show by the name of Candid Camera chronicled everyday American’s responses to “set ups” in different, oft funny, situations.

The show would “reveal” its intentions to its subject with the quip, “Smile, you’re on Candid Camera.”

“In the tradition of making people smile while examining the human condition,” says Peter Funt, the show's longtime host, actor and producer, “Candid Camera has been a celebration of people who are wonderful and smart. I hope, that as my Dad (Allen Funt) always put it, the show is remembered first and foremost as a celebration of the human spirit…not a ‘gotcha’ or a prank show program. We can learn about ourselves just by looking at our reflection.” photo courtesy of the beach articles

Allen Funt made America laugh with Candid Camera starting on the radio in the 1940s.

Funt and his team have written and designed a theatrical interpretation “to showcase 8 remarkable decades of people watching” and will present Candid Camera’s 8 Decades of Smiles! With Peter Funt at the Indian Wells Theater on Dec. 11 in Palm Desert.

“It’s not a lecture,” says Funt. “It’s not a total nostalgia thing with just a collection of clips. It’s plenty good fun but insightful. It’s an examination of what makes us tick with an emphasis on comedy. It’s entertaining for theatre audiences mixing clips, stories, and standup comedy with topical comments and social observations

Laughter With a Cause

• Candid Camera’s clip library is so rich, its content is used by many colleges and universities around the world in psychology and sociology.

• The Candid Camera team has produced specific videos, made available to grade schools at no charge, for the purpose of fostering discussions about tolerance, bullying, and other subjects.

• The Laughter Therapy Foundation, a non-profit established by the Funts, sends Candid Camera footage to critically ill people to help them heal. The foundation will be the recipient of the Palm Desert show proceeds.

Candid Camera was started by Funt’s father, Allen, as a radio show in 1947 and then made into a television program in 1948. It holds the historic distinction as the only entertainment show to produce episodes in all of the last eight decades. While Peter joined his Dad in capturing “slices of life” for Candid Camera, he is also a noted social commentator known for his essays and writings on social scenes and culture.

“The poet Robert Burns said, ‘The greatest gift is to see ourselves how other’s see us.’ That is the hallmark of Candid Camera. And, yes, we don’t have to take ourselves too seriously. There’s nothing wrong with laughing!’

Peter Funt believes Candid Camera, in particular, resonates with the public because, “(The audience) can identify with the comedy that comes right out of our own everyday experiences. We truly capture slices of real life. It’s the type of comedy people relate to. I’ll also say that there has to be something more to it.”

“It also means, that through our library, we give a kind of a unique perspective,” he adds, “at least from a comedic point of view, how Americans have changed and how they’ve stayed the same (over the years) in reacting to mildy comedic situations and the ‘social experiments’ conducted. I credit my dad for having an idea for a show, but also a genre that has many different applications.”