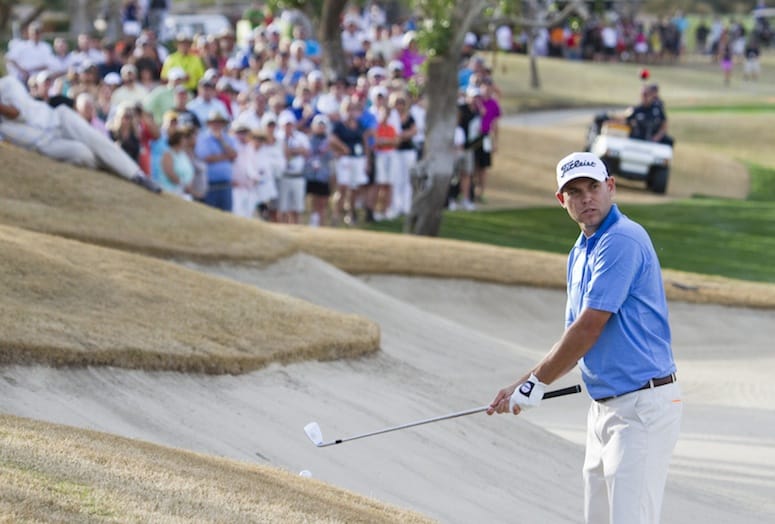 The desert’s annual PGA Tour event is back in the town, and with it comes a whole new equation:

• A new sponsor in CareerBuilder.

Though Humana is long gone, the former sponsor's strength of field remains with a host of major champions in play, including the great Phil Mickelson.

Historically known for players going deep into red numbers, the venerable tourney will indeed sport low scoring in its 57th annual year. However, the higher demands of the Stadium should quell that to a degree. What may prove most beneficial to the event is the nationally-televised display of courses which the public can play (save for La Quinta Country Club).

Per those tracks: Though the PGA Tour no longer conducts its Qualifying School in the same fashion, a host of the players in this year’s field are veteran enough to have last played the Stadium and Nicklaus back when they were sweating-out the acquisition of their Tour cards. Look for that to have bearing on this year's results. Brendon Todd has spent time on the tournament's golf courses.

Allow me to play that Qualifying-School card from the outset. No, Brendon Todd is not among the “name” players in the field and, no, the guy hasn’t had a top-10 since July of last year.

But Todd does know these courses well, having earned Q-School medalist honors at the Stadium/Nicklaus back in 2011.  Such desert success translated to a tie for 26th at the 2012 Humana and a tie for 6th place in 2014. Will the 82nd-ranked player in the world take the title?  Likely not – but don't count this dude out. Steve Stricker makes his first appearance in the desert since 2009.

“Steve is one of my favorite players,” so says, well, just about every ardent golf fan (especially those of us from the Midwest). Making his first desert appearance since 2009, however, a now 48-year-old Stricker arrives in La Quinta playing in his first event since August. The guy is a legend in my mind, not to mention a putting God, which is to say we’re fortunate to have him back.

But hunting for his first title since 2012? Not so much. Billy Horschel could be vying for top honors on Sunday.

Close to being a pro afterthought following a stellar collegiate and amateur career, Horschel's rebirth to golf relevance came here in Qualifying-School in 2012, where he authored a tie for fourth. Anyone who watched him play in that event and heard him talk about his game could tell the guy was deadly-serious about finding success on Tour.

The results? Horschel grabbed a debut Tour win in 2013 and then won twice more in 2014, including the FedEx Cup. Now the 26th ranked player in the world, the brash-Floridian is making his first appearance since September, and following a 2015 in which he grabbed just two top-10s in 28 events. I expect Horschel to find another resurgence in the Coachella Valley and be in the running come Sunday. Patrick Reed is primed to win at CareerBuilder Challenge.

Is it lame to select the field's top-ranked player to win? Perhaps. But, if you recall, I picked Reed last year as well, prognosticating he would be the first Hope/Humana/CareerBuilder player to defend a desert title since Johnny Miller in 1975-76.

Ranked No. 10 in the world, the 2014 Humana victor comes to La Quinta with a hot hand. Reed has finished no worse than 10th in the three official 2016 (consider the wrap-around schedule) events in which he’s played, and fresh off a second-place showing to Jordan Spieth at the Hyundai Tournament of Champions.

Reed took a pass on playing last week's Sony Open event, so I expect him to arrive fresh and ready to walk away as the ninth multi-time champ in the tournament’s storied history.