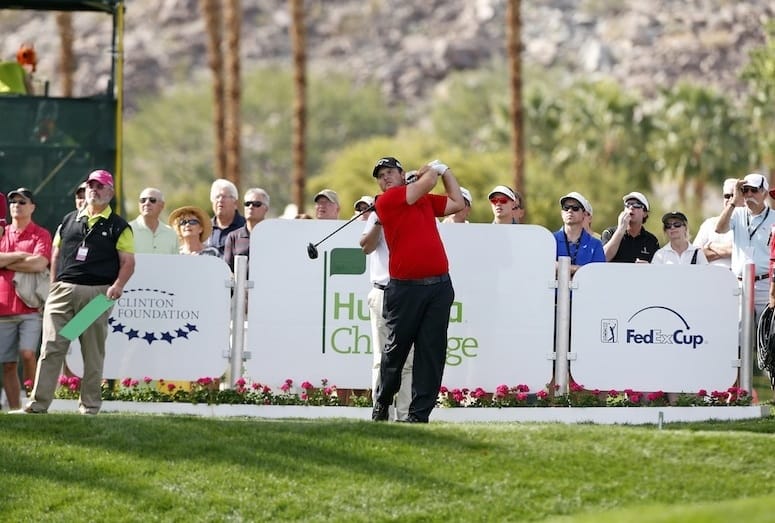 CareerBuilder, the global leader in human capital solutions, is the new title sponsor of the former Bob Hope Classic after entering a six-year agreement that runs through 2021, according to a join announcement by The PGA Tour, Desert Classic Charities and the Clinton Foundation.

The newly named CareerBuilder Challenge will continue to honor and celebrate the legacy of Bob Hope and his longtime role as tournament host; and through its existing relationship with the Clinton Foundation, the tournament again will promote a health-focused theme in 2016.

“We are extremely pleased to welcome CareerBuilder as the new title sponsor, joining the Clinton Foundation in support of a tournament that has been an important part of the PGA TOUR schedule for more than 55 years,” said PGA Tour Commissioner Tim Finchem. “While long associated with the great Bob Hope as the tournament host, the CareerBuilder Challenge has the distinction of being one of only two PGA Tour tournaments, along with the AT&T Pebble Beach National Pro-Am, in which amateurs play alongside the professionals during actual tournament competition. This is a unique event that also has had a significant charitable impact throughout the Coachella Valley since 1960. We look forward to working with CareerBuilder, the Clinton Foundation and Desert Classic Charities to continue to build upon this tradition.”

Since its introduction in 1960 as the Palm Springs Golf Classic, the tournament has generated more than $56 million for numerous non-profit organizations in the Coachella Valley that enrich the lives of Valley residents.

“CareerBuilder is excited to become the title sponsor of a tournament that is not only rich in tradition and sports excellence, but also has a strong commitment to philanthropy,” said Matt Ferguson, CEO of CareerBuilder. “This is a great venue to showcase our technology and evolution into a global HR SaaS company. We look forward to working with the PGA TOUR and the Clinton Foundation as we continue on our mission to empower employment around the world.”

The tournament underwent a transformation in 2012 when Humana and the Clinton Foundation joined forces with Desert Classic Charities and the PGA Tour to solidify the tournament’s future and redefine it as not only a tournament, but a strategic platform to establish and communicate new initiatives in health and well-being, including a major conference hosted by former President Bill Clinton.

“We have been proud to partner with the PGA Tour and Desert Classic Charities to improve health and wellness in the Coachella Valley and beyond, and we are so pleased to continue this work through the CareerBuilder Challenge,” said Valerie Alexander, chief marketing officer of the Clinton Foundation. “We look forward to being part of an exciting new chapter of this storied tournament, which will enable the community to enjoy world-class golf and give us the opportunity to help even more people live healthier lives.”

Also in 2012, the tournament adopted the current format of a four-day tournament with the first three rounds played in a pro-am format; the pro-am teams consisting of one professional and one amateur playing in groups of four; and for each day of the three round pro-am competition, the professional playing with a different amateur partner. While all amateurs compete in daily competitions as well as an overall, three-day competition, the experience became even richer for six of the amateurs beginning in 2014, as the top three gross and top three net leaders through three rounds now advance to compete during Sunday’s final round, playing individual stroke play.

“Desert Classic Charities is thrilled CareerBuilder will be our title sponsor, only the third in the 56-year history of our tournament,” said John Foster, chairman and president of Desert Classic Charities. “I know the people of the desert communities will join us in warmly welcoming this great company as we look forward to a long and beneficial partnership.”

The tournament continues to honor the memory of Hope, who became the tournament host in 1965 and was a constant presence throughout the years until his passing on July 27, 2003 at age 100. One element of tribute is the Bob Hope Trophy that is awarded to the champion of the CareerBuilder Challenge.

“On behalf of our family and the Bob Hope Legacy, we thank the PGA Tour and look forward to an exciting association with CareerBuilder and renewing our association with the Clinton Foundation,” said daughter Linda Hope. “Dad's spirit will continue to live on in the game he loved; in the tournament which bore his name, and in the charities that benefited from the marriage of those two. Dad's dream is in good hands.”