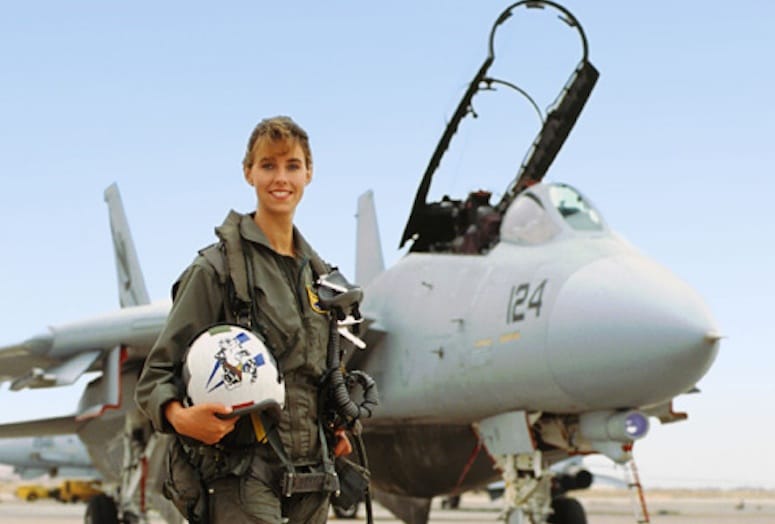 Carey Lohrenz, who became the first female F-14 Tomcat fighter pilot in the U.S. Navy, spoke Jan. 20 at the Executive Women’s Day at the Humana Challenge in partnership with the Clinton Foundation at PGA WEST.
Photo courtesy of Carey Lohrenz

Carey Lohrenz always knew she wanted fly, but she wasn’t sure there would be many opportunities for women to take to the skies.

Lohrenz kept this dream in the back of her mind, but it was her father, a former military and commercial pilot, who brought it into focus.

“My Dad brought home a flying magazine and there were a couple of women on it,” Lohrenz says. “He dropped it on the kitchen table and said, ‘Well, it’s now or never’…and that was that.”

Her dream was set.

Lorenz, who was the keynote speaker Jan. 20 at the Executive Women’s Day at the Humana Challenge in partnership with the Clinton Foundation at PGA WEST, went on to become the first female F-14 Tomcat fighter pilot in the U.S. Navy. Carey Lohrenz: "Focus on what really matters and be fearless."

Her experiences as a pioneer military aviator and successfully performing in one of the highest pressure, extreme environments have given her insights that she now shares across the country. Author of Fearless Leadership: High-Performance Lessons from the Flight Deck, Lohrenz admits that one of her most “terrifying and impressionable” moments in flight was “landing on the deck of an aircraft carrier…at night.”

She emphasizes that understanding your mission is critical to achieving your goals, and traits like knowing your purpose, working hard, focus and discipline are shared by high-performing people.

“Focus on what really matters and be fearless,” Lohrenz says. “Don’t wait for an invitation to make a difference.”