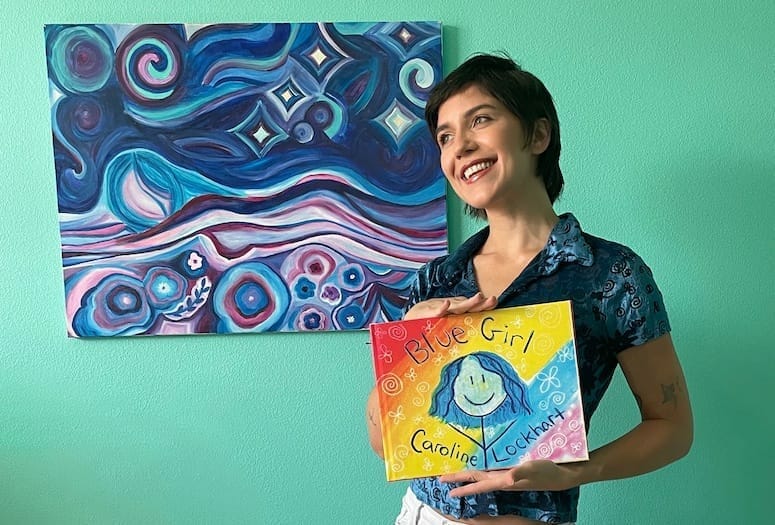 Palm Desert High School graduate Caroline Lockhart holds her first self-published book, Blue Girl. She has since published a second in the series with a third on the way.
PHOTOGRAPHY COURTESY CAROLINE LOCKHART

As a nanny, Caroline Lockhart noticed the books she was reading to the kids tended to fall on the silly side. As an author, Lockhart wanted kids to see themselves when they opened a book by her.

“I found that when I was reading to these kids, they engaged with stories or children’s books in particular that seemed kind of more messy and that used mediums that they used,” says Lockhart, a 2013 Palm Desert High School graduate. “There’s a series that I love called Pete the Cat and it looked like it was all drawn in crayon. And so I chose to do the same and I used stick people as all the characters, but every medium that I used was crayons, color pencils, watercolor, anything that you could find in the classroom. And I really wanted it to feel tangible in that way.

In her conversation with Palm Springs Life, Lockhart talks about the impact her nanny jobs have had on her writing, and how her artwork developed by accident. 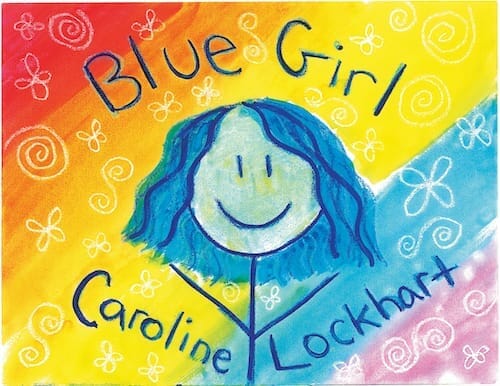 When did Blue Girl come alive for you?

I wrote it and illustrated it in 2018. It’s definitely been a project that I’ve been working toward. And I think the idea stemmed from even before that. I was painting a lot of a blue girl in my art and I was like, ‘How can I translate this into words and create a story..’

What was the inspiration?

Definitely, it stems from my work as a nanny and feeling like that work was very healing to my inner child. And I found that the kids that I was around seem to inherently understand these different issues that we face as adults. And I wanted to create a story of acceptance and compassion to carry them on into adulthood.

What age group are you gearing your story toward?

Ages 2 to 6, just before entering school. Because that’s the age range of children that I had the most experience with (as a nanny), but I was also well aware that that age group is the group that is read to by parents. At that time, a lot of books were very silly, but with no real moral message and we have these classics that we still read to kids to this day from Dr. Seuss or Eric Carle, but we didn't have any modern classics that maybe were approaching these pressing social issues. It alludes to things that maybe a child would not grasp initially, but I know that the response through social media and different people that have read it or seen the story, really it taps into something within them.

Is that asking too much of kids at that age?

I think they understand abstract ideas more than we give them credit for. They’re so spongy and full of wonder. It’s actually something that I think comes easier to them than it may to you or I.

Why was acceptance an important subject to tackle in the first book?

I know from my childhood I’ve maybe felt alienated at times or separate from others, but I think that’s almost a universal experience and each of us is navigating changes within ourselves every day. I wanted kids to have that message to grow up with them, to be accepting no matter how someone may appear to be on the surface.

Where did you interest in writing originate?

I was always very interested in writing throughout school. That was my best subject, definitely was English. And then I initially went to college for film, but I realized that I didn't see myself in the type of career that would pay off all my student loan debt. I wanted to go and just experience life in other places. I moved to Austin, Texas, at first and upon being there and picking up nannying, I felt like there was this creative spark that lit in me.

Before writing the book, I had been writing a lot of poems and I also was trying to write raps and stuff, but I didn't see myself fully pursuing that. I'm not extroverted enough to try and have a music career, but I remember one day I decided I'm going to try to make Blue Girl into a children's book. And because my mind was so fresh in just writing rhyme poems and raps, it almost all came out at once.

It was one day where it just flowed out of me and then the kids and the colors that they are feeling kind of came a little bit later, because I tried to contemplate that. And I also used kids that I was familiar with, I used their names. I tried to have it relate to their personalities in a way. There’s a little personal aspect, but it really did. It did flow out of me almost immediately.

How did TikTok play a role in publishing the first Blue Girl book?

I've grown up and seen social media progress and TikTok. I always had a really big interest in marketing and media. And I realized that TikTok has a way of reaching people beyond what any other platform has before. And so I had kind of been working at it for a little while, doing different videos on there. And then I had actually, briefly given up on my book because I had been denied by all these different agents. And I was like, ‘I’ll probably never find an audience for it.’ And one day TikTok notified me that you could do three-minute videos. And I was like, ‘Well, I could definitely tell this story in three minutes. I should just go for it.’ And within maybe 48 hours, it had 1.2 million likes.

It’s crazy, yeah. And it was all because I had already been working at it, but it was just divine timing in a way. It was that the algorithm picked it up and then people responded to it. And beyond what I had ever imagined.