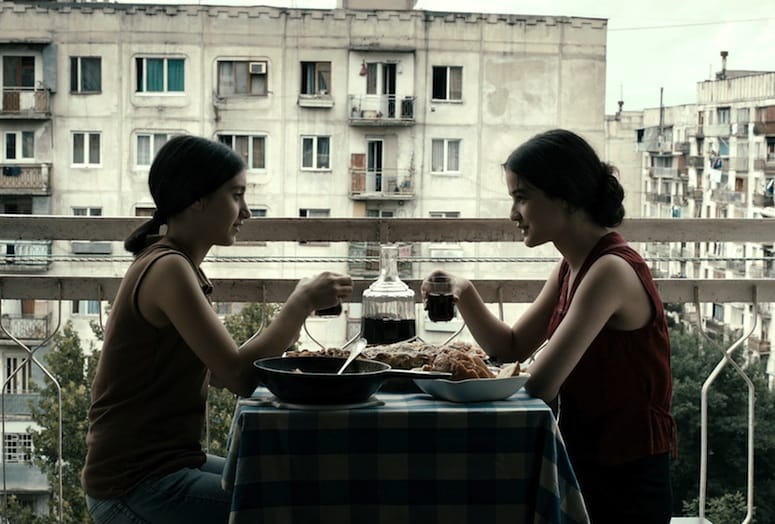 Imagine finding the stars of your feature film on the streets of Georgia – not in the U.S., mind you, but halfway across the globe in what was once the Russian-occupied country at the crossroads of Western Asia and Eastern Europe.

Directors Nana Ekvtimishvili and Simon Gross held numerous casting calls for In Bloom before finding Lika Babluani as Eka and Mariam Bokeria as Natia. The two girls create what is the pivotal coming-of-age relationship between a pair of 13 year olds against the backdrop of economic depression and civil unrest in Georgia in 1992 following independence from Russia in 1991.

“You can’t find 13 year olds in acting school or in some casting studios,” says Ekvtimishvili, who was raised in Georgia, wrote the screenplay and co-directed her first feature film. “We went to the street and looking for them. We saw Mariam walking on the street going to school.”

Ekvtimishvili and Gross’ observational skills paid off. The girls’ performances are integral to the success of In Bloom, which will screen at the Palm Springs International Film Festival opening Jan. 3. The film will be shown opening night at the Camelot Theatres as part of the Awards Buzz: Best Foreign Language Film program, and again at 10:30 a.m. Jan. 7 at Camelot.

The film has already racked up Best Film honors at the Sarajevo Film Festival and Wiesbaden GoEast; Best Film and FIPRESCI prize at the 2013 Hong Kong International Film Festival, and Audience Award at the Milan Film Festival.

The pair hopes to make the trek to Palm Springs, though they were recently in Los Angeles to promote the film. Despite the 12-hour time difference, they answered a few questions about the film for Palm Springs Life.

Did you have to do much coaching with the girls? They seemed so natural in front of the camera.

Simon: “We didn’t give them the script. We didn’t want them to start thinking about how they could act. We just told them step-by-step what they are doing, who they are and who they meet. We did the rehearsing with that approach. We let them do as they wanted. We didn’t tell them in a technical way to do this or do that. That’s why the casting was so important. These two girls were the ones who were able to present something from them and from their personalities in front of the camera.”

Nana: “They knew every line of what they had to say. If you are speaking the words to someone else during rehearsals, you are creating a character yourself. We never told them what they were supposed to feel. Through the text, they decided what to feel. They created their own characters by themselves.”

The film has been called out for its authenticity. How did you create that?

Nana: “It’s a very personal film for me. This is based on my experience at the time in Georgia. In 1992 I was 14 years old like the main character. Everything in the film is somehow related to me, my life, my family or to my close friends. I left Georgia at the end of the 1990s and studied in German. I thought about doing it for a long time. It was like a dream I saw. I wanted to put it on the screen to tell other people this story.”

Simon: “We spent a lot of time with the casting process. Most of the actors are non-professionals. There are a lot of teenagers in the film, even kids. Also, it was how we worked with the director of photography (Oleg Mutu). To let them be. They bring something from themselves, and not to approach them in a more technical way.”

Was it easier or harder to write a script for a story that was based on your personal experiences?

Nana: “From one side, it could be easier, but other, could be difficult. For me, I can’t write or tell a story that is not personal for me. It should be somehow close to me. It helped me that the story was so close and personal to me. Once I created the characters and wrote the script, it was something different than my life. It helps when there is some connection to your own life. I tried to follow my characters.”

I understand the wedding scene, in which Eka does a solo dance, was done in one take. How did that happen?

Simon: The main reason was we wanted to let it flow in a natural way. To give Eka and Natia the room to play and what they feel, and the camera would follow them in a natural way. The goal was to run a scene from beginning to end and not split it up into parts. It should be more about the expression and emotion of the characters rather than describe something to the viewers through close-ups.”

The film has been chosen as Georgia's submission as an Oscar nominee for Best Foreign Film at the 2014 Academy Awards. Were you surprised by the nomination?