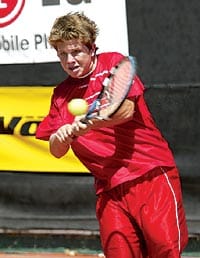 The next generation of tennis hotshots converges on Coachella Valley seeking prestigious titles at the Easter Bowl National Junior Championships.

Junior tennis has come a long way, thanks in no small part to Seena Hamilton, who has for 38 years nurtured, directed, and refined the Easter Bowl National Junior Championships into what has become known as the U.S. Open of junior tennis.

A former journalist and current public  relations and marketing executive, Hamilton landed two new sponsors (Evian and PowerAde) and adjusted the format of junior tennis to meet the needs of the pro game.

The Easter Bowl National Junior Championships — April 9-17 at Palm Springs Riviera Resort & Racquet Club and other Coachella Valley locations — introduces changes in the boys and girls 18s divisions. They are now International Tennis Federation level B1 events, allowing U.S. players to receive high-level international points while keeping their USTA level 1 points. The draw shrinks to a more competitive 64 (from 128). “With the highest level of ITF points, the Easter Bowl becomes highly attractive to juniors who aspire to play at the French Open and/or Wimbledon juniors,” says USTA President Franklin Johnson, a part-time desert resident. “This will enhance the Easter Bowl’s stature as one of the finest junior tournaments in the world.”

More than 700 players, parents, coaches, and sponsors converge on the Riviera Resort and other valley hotels — accounting for about 3,500 room nights and at least $1.5 million in economic impact, a welcome tourism boon as the season winds down. Moreover, the televised tournament gives the Coachella Valley national publicity.

The players feel like pros amid press interviews and TV appearances — important off-court training for young talent. And they’re in awe of the players who have gone before them — tennis players like Austin, Capriati, Fernandez, Davenport, Garrison, Sampras, Agassi, Chang, Connors, McEnroe, Courier, and Roddick.

Earlier this year, two past champions — Rylan Rizza (2000) and Doug Stewart (2002), both Californians and sophomores at the University of Virginia — competed in the National Collegiate Tennis Classic at Indian Wells Tennis Garden. Stewart reached the quarterfinals, Rizza the third round. Both call the Easter Bowl the most prestigious juniors tournament. In fact, JuniorTennis.com reports that players voted the Easter Bowl the most popular tournament in the United States.

“The Easter Bowl is the toughest tournament because it’s the first big national tournament of the year where everyone wants to win,” says 2002 champion Jarrett Chirico. “I loved playing on center court with lots of people watching, and I always loved walking through downtown Palm Springs.”

Many players advance to lucrative pro careers and give back to the game. For example, Zina Garrison, the shy girl from Houston who won the girls 14s in 1978 and was a finalist in 1981, reached a pro career high No. 4 and in 1990 became the first black woman since Althea Gibson to reach a Grand Slam final. She defeated Monica Seles and Steffi Graf at Wimbledon before losing the final to Martina Navratilova. Today, she heads the Zina Garrison Foundation, which supports homeless, youth, and anti-drug organizations; and her All-Court Tennis program instills self-esteem in inner-city kids. Garrison is also a USTA director at large and captain of The Federation Cup and U.S. Olympic women’s tennis teams.

“The Palm Springs area is clearly the tennis capital of the world with premier events such as the Easter Bowl, showcasing today’s top juniors and tomorrow’s professional stars,” says Charlie Pasarell, Indian Wells Tennis Garden CEO and tournament director (and the world’s No. 1  player in 1967). “One day we will see some of these players competing in the Pacific Life Open. In addition, these special events impact our community positively both economically and philanthropically. The Easter Bowl donated more than 150 racquets to the local National Junior Tennis League, which offers free programs at Indian Wells Tennis Garden.”

The young players in the Easter Bowl have numerous role models in the pros and receive much caring feedback. This is why there are always new wunderkinds on the scene.