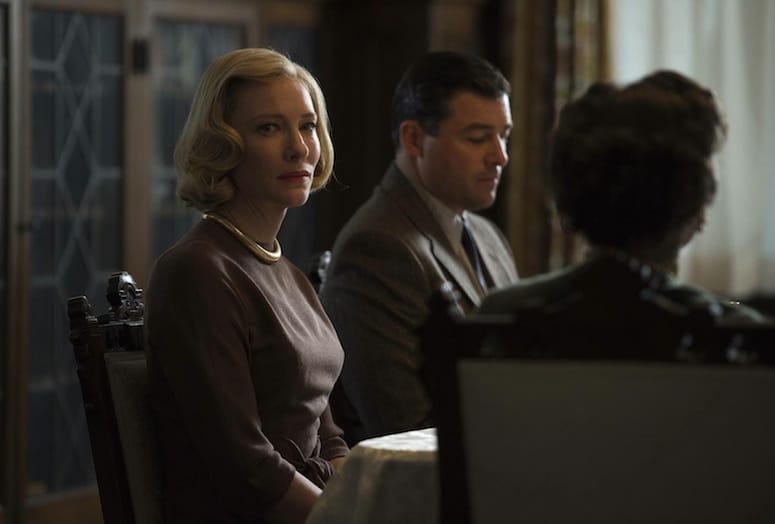 Cate Blanchett will receive the Desert Palm Achievement Award, Actress at the  27th annual Palm Springs International Film Festival's annual Awards Gala for her performances in both Carol and Truth.

This is the first award announced for the festival. Each year the festival selects an actor and actress to receive this award. The Awards Gala, hosted by Mary Hart and presenting sponsor Entertainment Tonight, will be held Jan. 2 at the Palm Springs Convention Center. The festival runs January 1-11.

“Cate Blanchett is one of the most award-winning and outstanding actresses of her generation, delivering extraordinary performances throughout her career,” said Festival Chairman Harold Matzner. Cate Blanchett with Rooney Mara in a scene from Carol.

Carol, an adaptation of Patricia Highsmith’s novel The Price of Salt, follows two women from very different backgrounds, unhappily married Carol (Blanchett) and department store clerk Therese (Rooney Mara), who find themselves in an unexpected love affair in 1950s New York. As conventional norms challenge their undeniable attraction, an honest story emerges to reveal the resilience of the heart in the face of change.

Truth examines the facts and the fallout surrounding a CBS investigative report on the military service record of then-President George W. Bush, aired on Sept. 8, 2004 just prior to the Bush/Kerry presidential election. As the subsequent story turned from the facts themselves to the reporting, however, CBS News producer Mary Mapes (played by Blanchett) and CBS News anchor Dan Rather (Robert Redford) would both soon lose their jobs and reputations.

Written and directed by James Venderb based on the memoir Truth and Duty by Mary Mapes, Truth also stars Topher Grace, Elizabeth Moss and Dennis Quaid. The film is distributed by Sony Pictures Classics.

Winner of two Academy Awards (Best Lead Actress for Blue Jasmine, Best Supporting Actress for The Aviator) and three Golden Globe Awards (Blue Jasmine, I’m Not There, and Elizabeth), Blanchett’s other film credits include Cinderella, The Hobbit (I, II, III), Hanna, Robin Hood, The Curious Case of Benjamin Button, Indiana Jones and the Kingdom of the Crystal Skull, Notes on a Scandal, Babel, The Lord of the Rings (I, II, III), The Gift and The Talented Mr. Ripley. Along with television credits including Bordertown, Heartland and Family Guy, her stage work includes Top Girls, Kafka Dances and Oleanna, earning the Rosemont Best Actress Award for her role in the David Mamet drama.