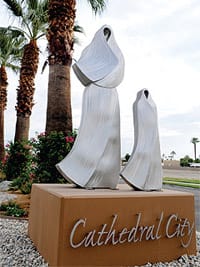 As a city focused on being a great place to “shop, dine, play, live, work and stay,” Cathedral City has long been at the forefront of progress. In 2009, Cathedral City introduced several programs aimed at helping local businesses attract customers.

The “Cathedral City Bucks” program launched in June is considered a winner for all. Auto dealers at the Cathedral City Auto Center, 62 local merchants signed up with the program, and people receiving some of the $92,000 of “bucks” issued by Cathedral City all benefited. “This has been a great shot in the arm for the local economy and the merchants, especially during summer,” observes Steve Morris, President and CEO of the Cathedral City Chamber of Commerce. “Businesses are getting new customers coming in to spend their bucks and then returning,” he adds. Mark Carnevale, owner of the popular Nicolino’s Italian restaurant agrees. “This promotion brought us over $1,000 of business in the first three weeks.”

This incentive program ran from June through August (though bucks can be used through November). It was designed to drive potential car buyers to the dealers at the Cathedral City Auto Centers and bring customers to local merchants in the program. These merchants included restaurants, movie theaters, and retailers. Redevelopment Director Jan Davison couldn’t be happier with its success. “This was a true win-win. By helping the auto dealers out, we helped many other businesses in the community.”

Here’s how it works: People who purchased a car received $100 in Cathedral City bucks to spend at any of the participating businesses. A test drive earned you $20 in bucks. Several lucky winners in two separate drawings netted $5,000 to use toward a new car purchase. “We wanted to help the community plus what a great way to thank our customers for buying a car,” says Orie Mann, general manager of Palm Springs Volvo Subraru, Merchants redeem the bucks with the city for cash contributed by both the city and the auto dealers.

The second value-added program that launched in mid-June is “Cathedral City is Value” (ccisvalue.com). This business-focused Web site offers anyone interested in shopping, dining, or playing in Cathedral City printable coupons with discounts to more than 70 diverse Cathedral City retail businesses, including restaurants, theaters, home service companies, beauty salons, and auto repair shops. The city promotes ccisvalue.com as part of its overall marketing campaign. Businesses have no ad costs, and the program is entirely free for them. “The Web site was an idea from the city’s citizen-based marketing committee. Its goal: Brand the city and attract people to Cathedral City to shop, dine, and play,” explains Allen Howe, Communications Officer. “We see it as a way to use our marketing dollars to do double duty. It’s created a vehicle for local businesses to offer discounts, and we use our marketing dollars to both market the city and help support the local economy.”

As expansion and development has stalled in many areas throughout the Coachella Valley, Cathedral City has made considerable progress with its North City Specific Plan, begun in 2007. This next wave of development will be truly cutting edge for the Coachella Valley. “We have moved forward and ‘set the table’ to make sure we’re prepared when that happens,” observes Leisa Lukes, Planning Director. Our message to developers is Cathedral City is ready to meet the needs of the future.”

“North City,” located north of Interstate 10 between Palm Drive and the city’s eastern boundary, will eventually be a vibrant city within a city. This area, which will be a significant part of the city’s future, contains nearly 5,000 acres of land, including 1,300 acres recently annexed from Riverside County. Only 2,000 acres will be developed; the rest will remain open-space conservation land. To best determine how to develop the land over the next two decades, the city retained The Arroyo Group, a leading Pasadena planning and urban design firm, to develop a North City Specific Plan. That plan is now complete. “The North City Plan creates a vibrant vision for the future. Through extensive community participation, we have laid out the red carpet for development to take place,” Lukes says. The city is ready for the next wave of economic growth.”

A freeway-oriented business park served by adjacent mixed-use districts is slated. An Edom Hill Industrial Park for manufacturing with an emphasis on renewable energy and sustainable products includes the potential for a destination resort showcasing dramatic valley views.

North City is well positioned, with nearly five miles of frontage on Interstate 10 to capture both the market demand created by predicted Coachella Valley growth and from thousands of freeway travelers passing by each day. In addition to the planned widening of the Date Palm Drive and Palm Drive interchanges, the Landau Boulevard interchange is on tap for funding to ensure additional access to the North City. Look for dramatic buildings along the freeway as part of the mixed-use urban district. The business park designation in the central area of North City adds an important piece to the city’s “shop, dine, play, live, work, stay” focus. Streetscape designs incorporate the desert environment, resulting in easy maintenance and low water usage.

Date Palm Drive links North City and downtown, which are Cathedral City’s “bookends.” It also draws people from the freeway to downtown. A Compass Blueprint Demonstration Project Grant from the Southern California Association of Governments was recently awarded to Cathedral City to help underwrite the costs to master plan the Date Palm Drive Corridor Connector. The goal is to create livability and economic viability. The city will receive both technical and financial assistance in creating a land use and economic strategy for the improvement of the corridor. “It’s exciting that Cathedral City’s Date Palm project was selected as a demonstration project so recently after the adoption of the North City plan in June. Date Palm provides the main linkage between the new North City and our urban downtown core, as well as being a major transportation corridor for the valley,” Lukes says.

Ramon Road, the area’s strategic east-west corridor linking Rancho Mirage and Palm Springs is undergoing major improvements through the Ramon Road Streetscape Beautification Project. The vision for this vital business corridor is “to revitalize businesses on Ramon Road and to attract new merchants, shoppers, and pedestrians to the area,” explains Mitch Nieman, Cathedral City Development Project Manager. Its goal is to create a pedestrian-friendly and aesthetically pleasing corridor. It beautifies areas in the public right-of-way like median strips, sidewalks, curbs, and gutters. It will also add new lighting and landscaping, as well as benches and public art. Cathedral City is also collaborating with the City of Palm Springs on the expansion of the Ramon Road Bridge at Landau Boulevard and Crossley Road. Preliminary engineering design has begun on this project.

The Commercial Façade Program (sister project to the Ramon Road Streetscape Beautification Program) is complete. This program offered funds to assist businesses along Ramon Road — including both owners and tenants — with a variety of improvements, including facade renovation, signage, doors, windows, awnings, exterior lighting, parking lot improvements, and landscaping. In this program, businesses received a dollar-for-dollar match from the Redevelopment Agency, based on the size of their property.

Cathedral City is a city where solid progress continues on far-reaching programs that make a significant difference in quality of life for the Coachella Valley. While all of this is going on, the city continues to build a positive sense of community though public art, community events, parks, and the spirit of partnership with the community.