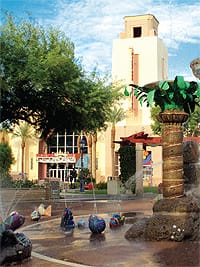 Earlier this year, the City Council adopted a resolution agreeing to join the Coachella Valley Energy Conservation Initiative, which adopted the goal for energy conservation and resource sustainability, including the goal to reduce valleywide per capita energy consumption 10 percent by 2012. The city has adopted several resolutions over the years that reflect its ongoing conservation commitment, including a resolution adopting a source reduction and recycled-product procurement policy; a resolution authorizing the city to enter into a memorandum of understanding with the Energy Coalition, Southern California Edison, and Southern California Gas Company to deliver an energy-efficient program known as the Community Energy Partnership; and a resolution declaring support for the California Green Builder Program.

In 2004, the city participated in a program to construct a photovoltaic carport-like structure to provide solar electrical generation. In addition, the city evaluated and implemented energy conservation measures in all of it buildings, replacing fluorescent lamps; retrofitting electronic ballasts and incandescent exit signs with LED fixtures; installing reflective window film on all south-, east-, and west-exposure windows; installing occupancy sensors throughout all buildings for automatic lighting shut off; and retrofitting all traffic and pedestrian crossing signals with LED technology. These combined measures resulted in a 79.9 percent reduction in the city’s energy usage.

A newly launched Business Development Team assists business owners across the city. It’s a one-stop resource for business owners as the team works with businesses, lending assistance wherever needed. This ranges from formulating business plans, consulting on ongoing business needs, and helping navigate through various city departments for permitting. “The Business Development team’s mission is business retention, expansion, and attraction. The team serves as a liaison with the business community and the city and acts as a resource to commercial real estate brokers who are marketing properties within the city,” says Jan Davison, redevelopment director. “The team functions as our liaison with the Cathedral City Chamber of Commerce, the Auto Dealer’s Association, and the Coachella Valley Economic Partnership,” Davison adds.

The Team worked on this summer’s “Locals Dine-Out Campaign,” in conjunction with the city’s Marketing Committee and the business community. This effort fits into the city’s “Shop, Dine and Play” marketing efforts and encourages residents to supporting local businesses by shopping locally and support business-to-business patronage. The city asked local restaurants to choose a day to promote their restaurant with any promotion they thought their customers would enjoy. The city in turn — at no cost to the restaurant — compiled a list of participating restaurants by the day of the week they selected and promoted this list through advertising in the Cathedral City Sun, on the radio, on-screens at the Mary Pickford and Desert IMAX theaters, and on the City of Cathedral City Web site. “This is also a way for us to do something for our families. We are very family orientated, since Cathedral City has the youngest population in the valley,” observes Mayor DeRosa.

On the Ramon Road business corridor, one of the city’s major east-west routes stretching from Landau Blvd. to Da Vall Drive, the city has two revitalization programs. “The goal is to revitalize businesses on Ramon Road, to attract new merchants, shoppers, and pedestrians to the area,” Mitch Nieman, Cathedral City development project manager explains.

The Commercial Façade Program offers funds to assist business owners and tenants with a variety of improvements, including facade renovation, signage, doors, windows, awnings, exterior lighting, parking lot improvements, and landscaping. In this program, businesses can receive a dollar-for-dollar match from the Redevelopment Agency, based on the size of their property.

Businesses outside the Ramon Road business corridor may also be eligible for the program with City Council approval. The city may also engage an architect to help the business owners with architectural design. The goal is to change the look of Ramon Road to be more attractive to shoppers.

The Ramon Road Streetscape Beautification Program is the sister project to the Façade Program. Its goal is to create a pedestrian friendly and aesthetically pleasing corridor. It beautifies areas in the public right of way like median strips, sidewalks, curbs, and gutters. It will also add new lighting and landscaping, as well as street furniture such as benches. The Façade Program enhances private property, while the Streetscape Beautification Program improves public areas. Cathedral City is a city with extensive community involvement. Business owners are key decision-makers on improvements.

Cathedral City’s downtown and town square continue to grow as a choice destination for residents and visitors to “Shop, Dine and Play.” The city is aggressively acquiring land near the city center to remove blight and in preparation for planned mixed-use development that will truly turn the area into a live/ work/play downtown.

New businesses continue to open in the town square. A recent and welcome addition next to the IMAX theater is Picanha Churrascaria and Picanha Pronto, two choice eateries offering Brazilian dining experiences. On Highway 111, Cathedral City’s auto dealerships, Toyota of the Desert and Palm Springs Ford, have completed major expansions and remodels, offering more reasons to come to Cathedral City.

The city’s seven entry points will soon have a new look, as options are being reviewed to replace the existing monuments welcoming you to Cathedral City.

Assembly Bill 939 requires cities throughout California to annually divert 50 percent of their waste stream from landfill disposal. AB 939 legislation gives the state the right to penalize a city $10,000 a day if they fail to meet the yearly 50 percent diversion requirement. Thanks to implementing source reduction, recycling, and composting programs with no general-fund dollars used, the city has steadily increased its diversion rate to 56 percent.

Cathedral City was the first valley city to initiate a water conservation program in which residents can receive up to $500 in matching funds to remove the turf from their yards. This program promotes replacement of grass with drought-tolerant landscaping and removal or replacement of a sprinkler system so that it does not allow for spillover onto sidewalks and streets. This program won the 2007 California Resource Recovery Association Award in the Outstanding Waste Prevention Program category. According to Mayor DeRosa, the city has saved 14 billion gallons of water with this program.

The S.C.R.A.P Gallery Program and the city’s Refuse & Recycling Guide are just two of the city’s educational programs. In January, the Student Creative Recycling Art Program, more commonly known as the S.C.R.A.P. Gallery, celebrated its 11th year of environmental service to the community. The nonprofit organization is dedicated to the education of youth regarding environmental issues. The mission of the S.C.R.A.P. Gallery is to utilize creative ways to engage children as stewards of the environment by stressing the four Rs: reduce, reuse, recycle, and responsibility. The S.C.R.A.P. city calendar and the Refuse & Recycling Guide have both won numerous national awards.

Once again in 2008, Cathedral City stayed ahead of the curve, continually developing progressive programs and making a difference for its families and businesses.