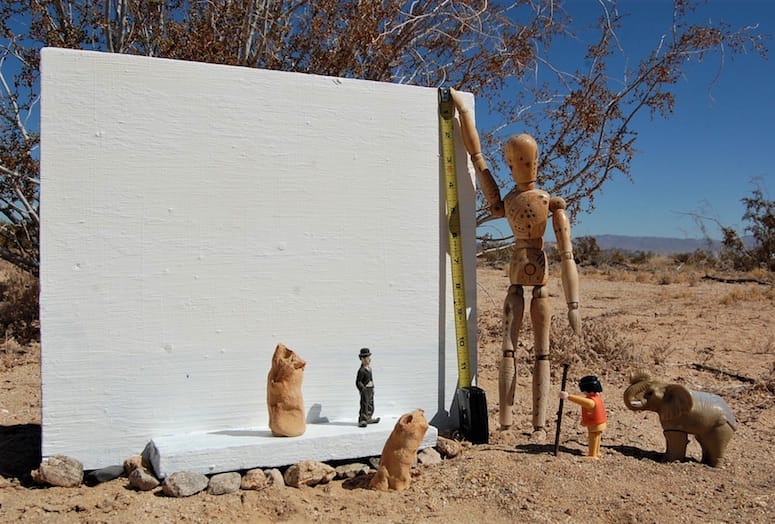 A new addition to Sunvale Village, a community for the small, is a drive-in theater in Twentynine Palms.
PHOTOGRAPH COURTESY CATHY ALLEN

There is a sign for parking. There is even a check-in box complete with a map and a guest book to sign. And the last sign tells you where you are: Sunvale Village. After pulling off Highway 62 in Twentynine Palms and turning down Sunvale Road, you still won’t see Sunvale Village. That’s by design. Its inhabitants are not bigger than 12 inches. Structures top out at 15 inches. This community for the small, according to its creator, artist Cathy Allen, is her adult sandbox.

“I just wanted to do something that I didn't care whether it was good,” says Allen, who is also an art professor down the road at Copper Mountain College. “Having a degree in art, I'm always kind of judging and a lot of critical thinking going on in my other work, and I wanted to do something that I wouldn't judge myself. It could be silly. It could be serious. It could be whatever it needed to be, and I still try to think that way. And it becomes a commentary on all kinds of things; I think satire often.”

Sunvale Village sits on a 5-acre parcel owned by Allene and her husband, artist Luther Broome, and just adjacent to where they reside. The map she provides includes the Small Manifesto and numerically ordered details of each stop you will make touring Sunvale. The trail to visit each resident is marked by street signs.

What you see is a reflection of Allen’s passion for repurposing, a trait she picked up from her mentor, Noah Purifoy, who passed away in 2004. Purifoy helped to pioneer outdoor desert art built almost entirely from castoff objects. More than 100 sculptures and installations of Purifoy’s work occupies 10 acres of land north of Joshua Tree. You can visit the Noah Purifoy Desert Art Museum of Assemblage Art — or the Outdoor Museum — every day of the year, free of charge, sunrise to sunset.

Sunvale Village is composed of castoffs as well, like troll dolls from the 1960s, and all of the structures are made from repurposed materials. Allen has found many of them on her treks around Wonder Valley while others have been donated by friends or even people who have visited the site and wanted to contribute. What started as a community of six three years ago is now pushing 90. 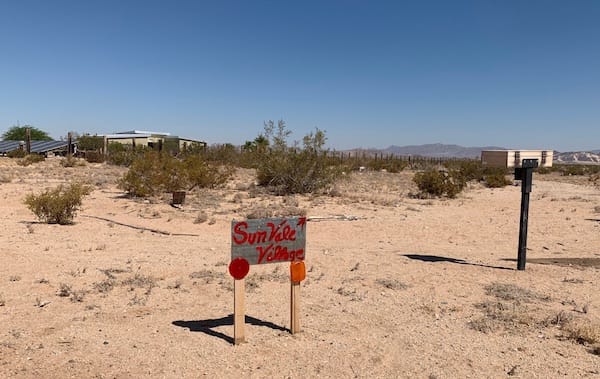 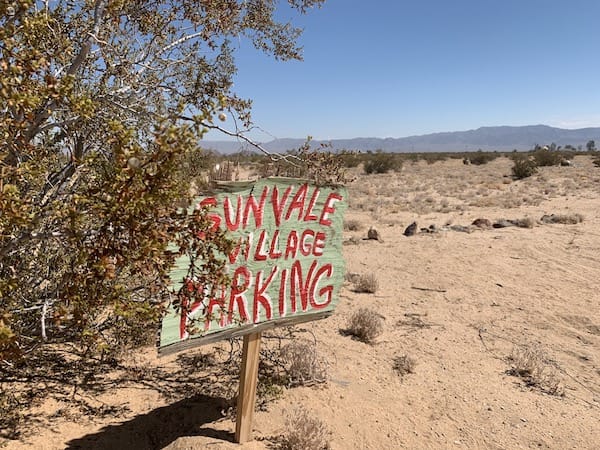 Signage facing Sunvale Road shows the home of Sunvale Village, where to park, and an elevated box that stores a map of the community and a guest book to sign.

The latest project, a drive-in theater, is chronicled on the Sunvale Village Facebook page. You can get many of the backstories on the inhabitants of Sunvale there. She has even crafted a small newspaper (literally, it measures 3.5 inches by 5.5 inches), The Wee Web Post-It, which addresses community issues.

Do people stop by to see Sunvale Village?

I get visitors out here regularly, not a lot, thank goodness. But I get people coming through that look for unusual, out of the way places. So I've got it set up out there. It's kind of open to the public. I try to keep a low profile. I don't want a lot of people. I enjoy visitors and I welcome them, but I am concerned also because I don't want to make it a Disneyland. I try to meet everyone. I can't always, so I have it set up so people can do a self-guided tour. If I'm busy doing something, I won't go out, and I've been sort of hesitant lately because of the pandemic, of course. But I usually like to try to go out there and meet people if I can. And sometimes they'll hand me things, or they'll ask if they can give me something to weave into the story, which is great. So I get to meet them, but then often I'll go out and someone has left something there.

How was Noah Purifoy an inspiration for Sunvale Village?

I worked with him many years ago when I first moved up here and was inspired by his installation. So I thought of doing something similar but wanted to do something small because of the view we have. 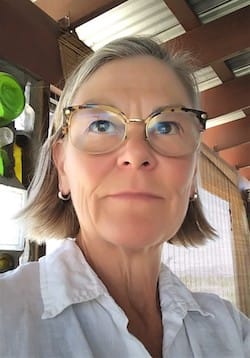 I mean our rationale for buying the property was to prevent somebody from blocking our views. So when we talked about sculpture and installation out there, I kept thinking, "Well, no, we're working against ourselves because we wanted to leave this open." So I had this funny idea about making smaller sculptures, and then that turned into this community of smalls. I had been collecting dolls or toys, I guess, not necessarily dolls. Most of my materials in my art practice are from dumpsites. And so, out here in Wonder Valley, there's plenty of those. So one of my things is to drive around and scavenge these sites and think that I'm doing some good too and partially cleaning up these places. So with those little field trips, I was always finding toys, and I would collect them and just throw them in a box because I wasn't really working with those things.

Did you look at Sunvale Village as telling a story, or did you think it would just be a bunch of random installations?

I guess I just started it randomly. I never had a master plan. I had no idea it would still be going on three years later, a little over three years, and I have no idea how long I will be doing it. It keeps my interest. I go through phases with other bodies of work, and I'll have a theme that I work with. And then I go onto another thing, but this is so multifaceted that I think it keeps my interest in a great way. 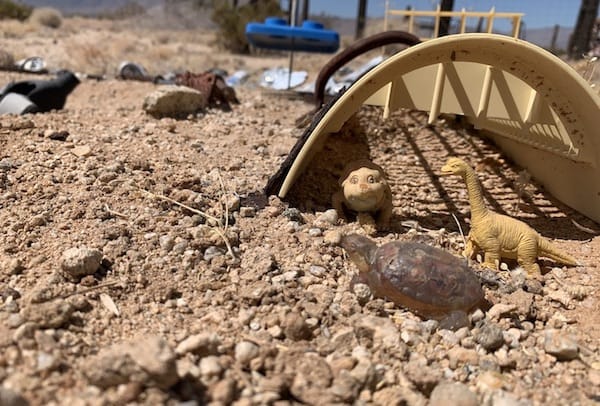 It incorporates a lot of things that I do into one space. It has sculpture, it has installation, it has humor. There's photography involved. There's some of the public relations involved in meeting people. That's great. So it contains a lot of different things that I enjoy and can be creative with into one space. I also like the fact that it's close to my house. I don't have to haul a bunch of things back and forth like I do with sculptures. So it'll probably go on for hopefully as long as I live here. Maybe they'll bury me out there, I don't know.

What kind of message are you trying to convey?

It can definitely display my political views and current events, and my thoughts on that without getting in too much trouble. I do it in a way that's humorous, or it can just be really goofy. I mean, I have some pretty lame things on there, but people seem to enjoy it. It entertains me, and it entertains others. So what the heck. 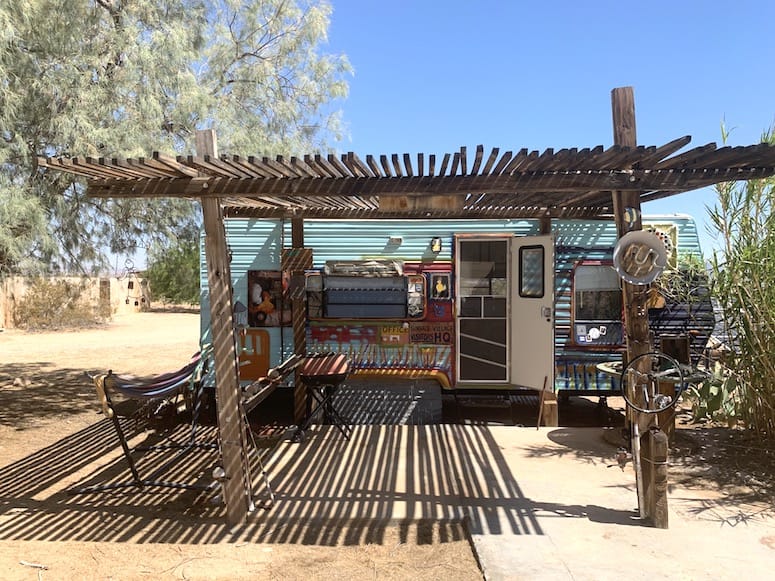 This trailer near Cathy Allen's house is the headquarters for Sunvale Village. Inside the walls are decorated with the history of Sunvale's beginnings, and there is a Small jail for those not quite ready to join the community. 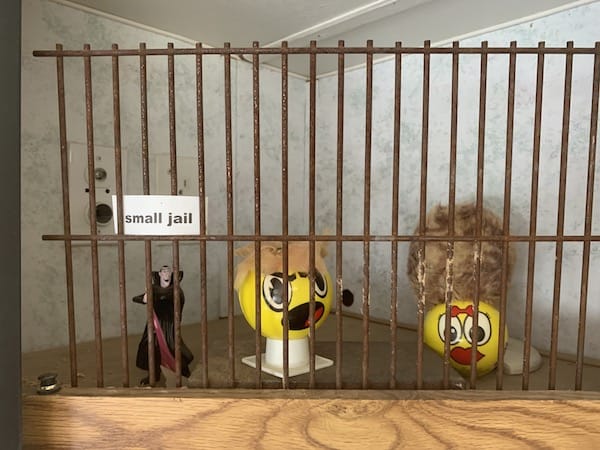 When we look at Sunvale, how much of you do we see?

I had a friend that said that... I thought this was an interesting observation from her. I've known her since graduate school. And she said, "This is almost like a complete self portrait installation because it talks about a lot of things that I think about." And it incorporates some of the different genres and approaches to art making.

Have you had any issues with the weather damaging Sunvale?

Yes. They were flooded out I think it was at the first year. I always work that into the story. No physical harm came to any of the characters. They just pick back up. Wind destroyed a couple of the dwellings. They are little dwellings. I think that was the second year. So I always try to work that into the story somehow. One day, I was able to do a short film of a helicopter going over, and it was just a random thing. But I worked a story around that. It was right after the torrential rains we had. So I worked that little video of the helicopter going over into the helicopter was looking for more damage in Sunvale Village, and they sent out the troops to find one of the characters and stuff. So I try to take advantage of what's given to me.

In addition to toys you find that are part of Sunvale, you also create pieces?

Most of the homes that they live in are created by me. Some of the little homes are stuck down in the dirt or weighted down with rocks. Many of them are also constructed and just set up. It depends. So some of the things that are assembled like the plywood pavilion, for example, made out of things that were just right there like pieces of plywood and old sticks. Somebody had done some tree trimming and left a bunch of sticks out there. So I worked that into a design. So actually, some are made in my studio, which is a separate space, and then some are made onsite.

Sunvale Village seems like a very natural extension of the desert.

There's something about it that's true to life. Life is not perfect, and stuff happens. So I think work like that, work dealing with the elements of life and death are true to life and death. Noah knew that. He was very much about, "It's just my job to make the work, and if somebody else wants to preserve it, that's their business. They can do it. They can do whatever they want." And I remember that attitude very well and responded to it thinking about life and art and why I'm an artist, and what drives me are those things. 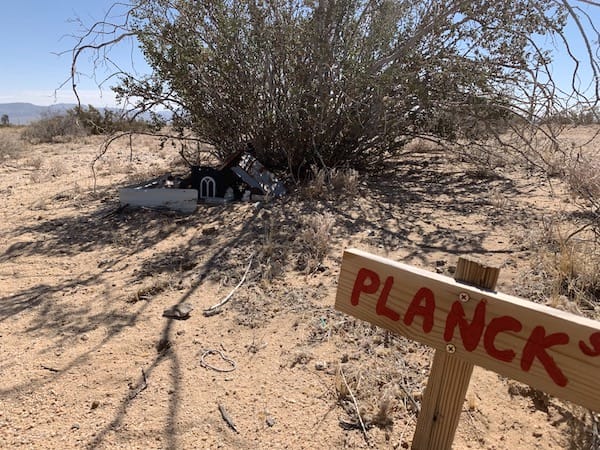 After entering Sunvale Village, you follow Planck Street where you will find Lil Bear and Scarfy.

I mean, life's difficult, and I think my creativity and my artwork is a tool to deal with those situations, whatever comes up. And I think artists can kick into gear when things get rough. I think artists can really kick into gear and think creatively about dealing with it on all different kinds of levels, a personal level sometimes, or if they're doing work, say, in the public realm, like public art or something. And of course people are going to respond or they should. They should respond because we're talking about something that we all deal with. Life's life and whatever happens along the way. So I think that kind of work is closer to those things.

For more on Sunvale Village, visit the Facebook page: facebook.com