The Cavanagh Adobe, which turns 100 years old next year, was conceived as a two-bedroom, two-bathroom ranch house surrounded by date palm.

The Coachella Valley once was dotted with hundreds of adobe houses, but most have washed away, collapsed, or been demolished over time. Dating mostly from the 1920s and 1930s, the dwellings reflected their owners’ passion for earthy curves and textures — with a big nod to Mexican and Spanish styles. Because of the organic construction materials, adobes are eco-conscious but transform with the weather, such as absorbing water after a rainstorm and attracting desert sand and critters.

The Cavanagh Adobe is one of the oldest such homes still standing in the valley. H. Anderson Sanders originally designed the Indian Wells house, and brothers Albert and Hubert “Bert” Cavanagh began constructing the adobe in 1922 with thousands of bricks made with soil from a ranch in nearby La Quinta by Bert, foreman Juan del Rio, and Mexican workers. 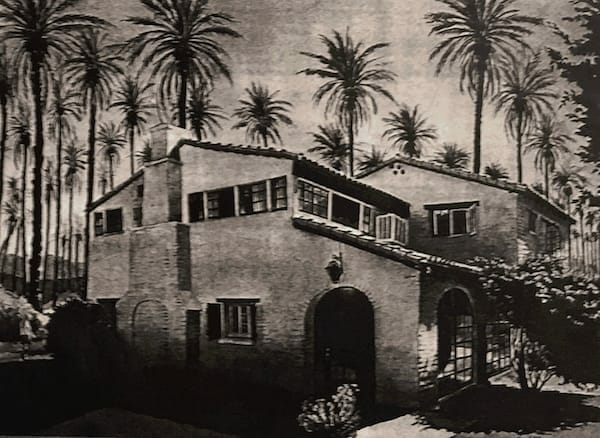 The building, which turns 100 years old next year, was conceived as a two-bedroom, two-bathroom ranch house surrounded by date palms. Throughout the decades, the home was frequently modified, and fewer than 20 of those original Deglet Noor date palms remain.

Several original details remain, such as the ground level’s concrete flooring that was scored to resemble tiles and infused with terra cotta pot shards to provide a distinct shade of rust. 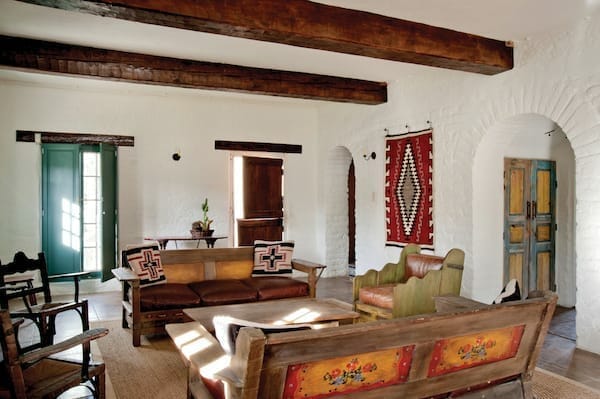 After the previous inhabitants accented the adobe’s interiors with French Provincial flair, current owners (and architects) Michael Burch and Diane Wilk reverted the Cavanagh Adobe’s style to more closely resemble the original aesthetic, such as adding a wainscot of Tunisian tile and decking it out with period-appropriate décor and antique furnishings.