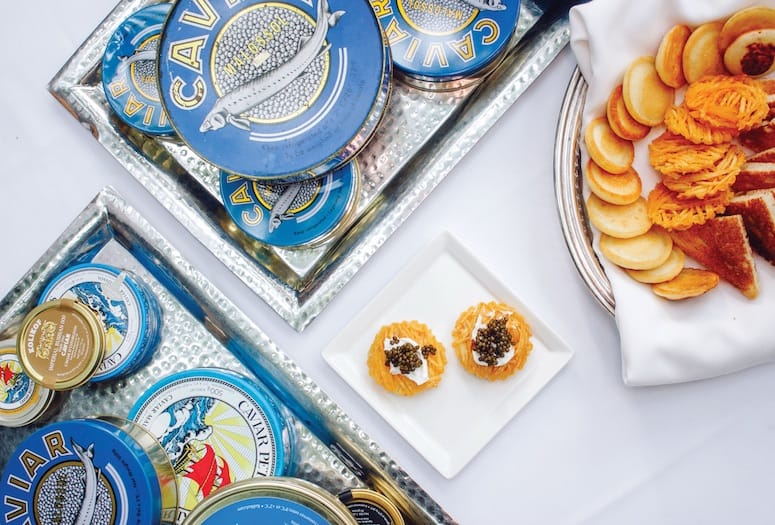 You need not look far to find opulent ingredients turning dishes more decadent these days. Plenty of steakhouses offer Japanese Wagyu, one of the world’s most flavorful (and expensive) meats. And chefs everywhere will gladly pile your pasta with imported truffles — those fancy fungi that cost a small fortune. But among the upper echelon of delicacies, there is, perhaps, still nothing as revered as caviar. Maybe because it has always been associated with elegant eating, luxe living, and posh people noshing on it from sterling bowls on their private yachts. Robin Leach’s famous tagline — “Champagne wishes and caviar dreams!” — became a mantra not only for his iconic TV series Lifestyles of the Rich and Famous, which let viewers ogle the lives of the 1 percent, but for the over-the-top 1980s in general.

Part of caviar’s panache may be linked to its breathtaking price, pushed up, in part, by the fact sturgeon eggs take years, and sometimes close to a decade, to mature. But with the decade of excess firmly in the rearview mirror, what has become of diners’ desire for those specialty salt-cured sturgeon eggs? According to chefs at finer restaurants around the Coachella Valley, classic caviar service is far from a lost art, and indeed still a staple on their menus, with diners shelling out hundreds of dollars to indulge nightly.

• READ NEXT: What is the Fate of Wally's Desert Turtle in Rancho Mirage?

“Le Vallauris has a long history of serving caviar, and we’ve seen an increase. Year after year, we sell more and more,” says Jean Paul Lair, executive chef at the French-focused restaurant in Palm Springs that opened in 1974. Lair points to the fact that many Americans now grow up regularly eating sushi — which often incorporates other types of fish roe like those plump orange salmon eggs known as ikura, as well as tobiko, the tinier roe of flying fish that might be black or red — as part of the escalating interest. “A lot of younger generations love sushi and they already have a taste for that.”

At Palm Desert’s 33-year-old French farmhouse-style restaurant Cuistot, chef and owner Bernard Dervieux counts caviar aficionados among his return clientele. They love the Siberian Black Pearl Ossetra caviar he describes as having small dark eggs and fantastic flavor. “People come for caviar on a regular basis. It’s not somebody that’s trying to show off for his friends. Ninety percent of the people who order it know what it is and enjoy good caviar, and they come for that.” He sells it for an ever-changing market price, which was recently a little less than $100 for an ounce with classic condiments. (More on those in a moment.)

Le Vallauris offers two caviar options on its multiple menus any given day, with a third added during holidays. “It’s on every menu, it’s on the board, it’s the first item you see,” says Lair, who presents a silver platter of the caviar in its tin over ice and surrounded by accoutrements. “People sometimes see it and say ‘Why not try it? We love caviar.’ Once you take a bite and you have a nice glass of wine, all of the sudden you’re in the mood to have a nice dinner. It really opens your appetite.”

Right now, his offerings include Russian Ossetra Caviar, a light-brown medium-grain (grain being a term interchangeable with eggs in the caviar world), and Imperial Triple Zero, a larger-grain caviar with a dark gray color. Le Vallauris’ caviar services cost $125 and $165 per 30-gram portion, respectively. 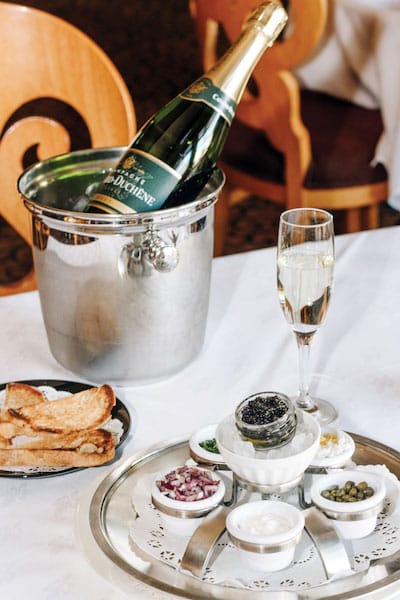 And while the Ossetra is perennially available, the Triple Zero rotates out depending on what his purveyor offers at the time. “The market has totally changed,” Lair says, pointing to the explosion of farm-raised offerings since the United States banned the import of Beluga caviar in 2005 due to overfishing of the now-endangered Beluga sturgeon, primarily found in the Caspian Sea. “Every country now does a caviar. Most of what we’re getting is Russian, Chinese, French, and Italian sometimes. It’s quite interesting.”

While savvy diners often look to order wild-caught fish hooked in their natural habitats, you won’t be able to find caviar harvested from wild-caught sturgeon. Anywhere. “There is no wild caviar that is legal. It’s all from farms, and they’re all bred sustainably,” says Jim Miller, owner of Los Angeles-based Kolikof Caviar, which provides caviar to local venues including Le Vallauris and Parker Palm Springs. “They’re all controlled by fish and wildlife. Guys with guns show up when it’s imported and check to make sure it’s grown on a farm.”

All Russian Ossetra caviar — one of the best-known offerings — derives from Ossetra sturgeon that’s traced back to Russia but could be farmed in any number of other countries, so one farm’s product might taste different than another because of the mineral content in the waters where its raised, according to Miller, who travels to farms around the world to see and taste the caviar before importing and selling it.

At The Edge Steakhouse at The Ritz-Carlton, Rancho Mirage, guests find three varieties, all brought to the table in 1-ounce jars and opened in front of them a la wine service. “All three are great but some guests want something different, and each one has a different flavor profile,” says specialty chef Jorge Martinez. The restaurant sells around five to 10 a week during high season.

The Edge offers a traditional Ossetra Caviar at $165 an ounce along with a more mellow Golden Ossetra at $210 an ounce, both sourced from Russia. Its Royal White Sturgeon Caviar is harvested from a fish native to North America and raised here in California. “It’s the most high-end caviar we have in the United States. It’s shiny black and has a very creamy flavor, and it has a little pop. If you’ve never tried caviar, I recommend this one. You’ll say, ‘Oh, now I know why it’s so special.’” Note it also has a special price: $235 an ounce.

Most of the restaurants offer strikingly similar accouterments — chopped egg yolk and egg white; crème fraiche or sour cream; toast points or blinis; and maybe some diced red onion or capers. But caviar experts will tell you to do as they do and eat it as simply as possible.

“It’s up to the guest, but if you really enjoy caviar, just a blini with a dab of caviar and maybe a dab of crème fraîche is actually the way to go,” Martinez says.

“I just like it on toast points,” Dervieux says. “I don’t like everything else that comes with it.”

And Lair says he prefers it “with toasted bread with butter, but you have to use a generous spoon of caviar.”

Whatever you do, don’t miss out on that perfect pop, Miller implores. “Part of the fun is you push it with your tongue to the roof of your mouth and you let it burst to taste the flavors slowly. You don’t want to chew it like it’s a piece of chewing gum.”

You won’t confuse the two once you get the bill. 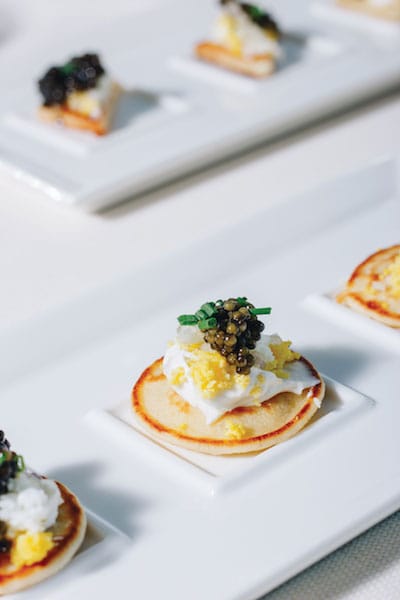 The Edge Restaurant at The Ritz-Carlton, Rancho Mirage.

How do you know if the caviar you’re splurging on is up to snuff? Here are a few pearls of wisdom from Kolikof Caviar founder and owner Jim Miller.

• If it’s fishy or metallic in taste, you’re not getting the good stuff, he says. “It shouldn’t taste anything but salty and sweet.”

• Make sure it’s served in the original single-serving vessel. “Caviar, once its opened, is no good after a day, and I certainly wouldn’t eat it after two days.”

• Try it alone. “You could have bad caviar and not know it if you cover it with onions and lemon and crème fraîche. You should like the caviar with nothing before you like it with everything.”