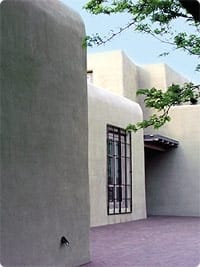 If you believe that initial impressions reveal truths about people and places, then you’ll understand why Georgia O’Keeffe made her home in New Mexico’s vivid and dramatic landscape.

After she first experienced New Mexico, the artist wrote to a friend, stating that she was "always on my way back." Miss O’Keeffe — as many referred to her during her six decades in the Southwest — found endless inspiration for her art and her life underneath the azure skies. Whether the subject of her creative energies was the undulating surface of a cow’s pelvis or the geometric shadows of a doorway to her Abiquiu home in Northern New Mexico, an undeniable sense of place infused her art and testified to her appreciation of New Mexico’s natural beauty.

Both during her lifetime and since she passed away in 1986, the artistic legacy of O’Keeffe has resided at the pinnacle of America’s art history. In her early years she was celebrated for her greatness, at a time when few women were accorded fame. She began her love affair with New Mexico in the late 1920s, making it her home in 1949. The move enhanced her reputation by providing an iconographic backdrop powerful enough to hold up to her precise, insightful and unerring scrutiny.

Today, O’Keeffe’s towering legacy is celebrated through the exhibitions and programs presented by The Georgia O’Keeffe Museum, an art-filled treasure on a quiet street in downtown Santa Fe. From the moment its doors opened in mid-1997, visitors from across the globe have attained new insight and understanding of the far-ranging impact O’Keeffe and her peers had on developments in the history of American Modernism.

The museum’s exhibitions, which have earned a stellar reputation, extending far beyond New Mexico, are now entering an era of even greater acclaim. In March 2006, the Georgia O’Keeffe Foundation, which since her passing has preserved the artist’s personal effects as well as a priceless archive of her paintings, sculptures and drawings, transferred 831 works of art to the museum. This single act of philanthropy increased the museum’s permanent collection of O’Keeffe works of art from 271 to 1,102 pieces, prompting Juan Hamilton, the person closest to the artist during her final years, to say the museum "…is now the repository [for O’Keeffe’s work]."

In addition to numerous personal effects and works of art, the foundation’s gift also included stewardship of the residence in Abiquiu, which was O’Keeffe’s home and studio. The artist is perhaps best known for the significantly more rural and isolated home she also maintained at Ghost Ranch, today a 21,000-acre retreat center 20 miles north of Abiquiu.

The Abiquiu home has parts of its structure dating to the 18th century. O’Keeffe purchased the property from the Archdiocese of Santa Fe in 1945, shortly before the death of her husband, Alfred Stieglitz, in 1946. She spent the greater part of the next three years having the house renovated.

By 1949 O’Keeffe took up full-time residence in New Mexico. Many of her works were inspired by the Abiquiu house and its surrounding views, including its patio and black door, the cottonwood trees along the Chama River, and the road to Santa Fe. To the extent possible, the house remains as it was left by O’Keeffe in 1984, when she moved to Santa Fe prior to her death in 1986.

The museum’s exhibitions, which showcase the paintings, drawings and sculpture of O’Keeffe as well as the men and women who were her artistic peers throughout her career, are enhanced and explained through the museum’s public programs. Prominent art world authorities from across the globe feature in a year-round lecture series that takes a closer look at issues relating not only to O’Keeffe but to current concerns in art circles.

An equally influential facet of the museum’s public programs is its emphasis on family and youth activities. Inclusive of audiences ranging from local Native American pueblos to weekend visitors, activities include a summer Art & Leadership program for children aged 11 to 13, and a free, monthly Family Program for parents and children.

According to Director of Education and Public Programs for the museum, Jackie M., "O’Keeffe’s work is very accessible to young people. The colors, subjects and shapes are comprehensible and can be discussed in an age-appropriate manner. The museum also offers a family audio tour of its summer exhibitions, and a book for pre-school children on the life of Georgia O’Keeffe."

While a selection of the newly acquired works from the Georgia O’Keeffe Foundation will be on display in The Georgia O’Keeffe Museum throughout 2007, six changing exhibitions through 2006 and 2007 will give many reasons to revisit the museum’s nine galleries as well as the Museum Store, which has a large selection of books about O’Keeffe.

With its slate of sophisticated exhibitions and stimulating public programs, The Georgia O’Keeffe Museum is a must-see attraction.

Throughout 2007 The Georgia O’Keeffe Museum will commemorarte its 10th anniversary with a series of events ranging from academic gatherings to educational outreach programs. For information about specific dates, times and locations, contact the museum at (505) 685-4539.

While The Georgia O’Keeffe Museum has stewardship of both the Ghost Ranch and Abiquiu residences, due to preservation concerns the public is able to visit only the four-acre Abiquiu home. Requests to tour the Abiquiu residence must be made substantially in advance of one’s arrival in Santa Fe, and can only be made through the museum.

O’Keeffe’s home in Abiquiu, less than 50 miles from the O’Keeffe Museum, is open to the public on Tuesdays, Thursdays and Fridays from mid-March through late November, by appointment.

Tours last approximately one hour and are limited to a maximum of 12 people. Exterior tours may be arranged for larger groups.

A fee of $25 per person, submitted with the name and address of each visitor, is due one month prior to tour date. The student and senior citizen rate is $20 per person. No refunds are given, although if cancellations are made 24 hours in advance, you will receive a credit and may reschedule within a year subject to availability. For reservations please call (505) 946-1000.