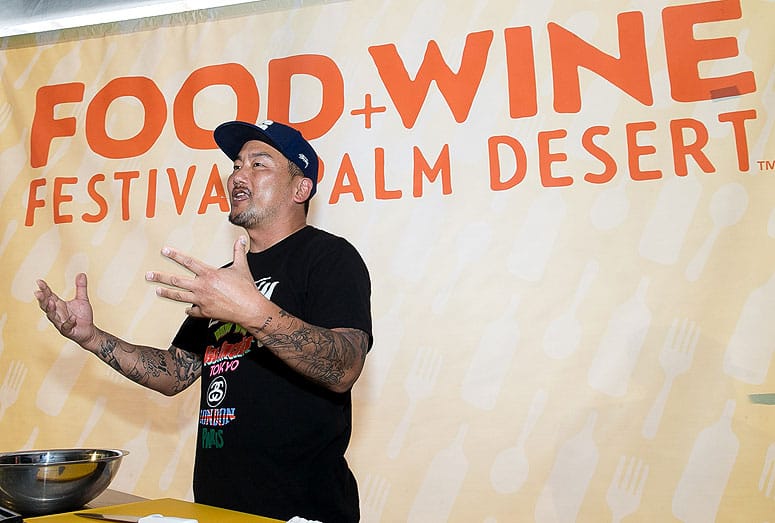 The Sunday, March 23 Grand Tasting, “Brunch, Bubbles, and Brews,” put the emphasis on champagnes, sparkling wines, and microbrews —  a refreshing counterpoint to a hot spring afternoon.

Some patrons started with sweets from candy maker Brandini Toffee and Chicks with Bark, while others ducked into the cool sanctuary adjacent the Toscana Country Club Tasting Tent for a brief beer seminar with Ryan Pearson, La Quinta Brewing Co.’s brewmaster. The establishment’s “core classics,” which debuted when the microbrewery officially opened in November of last year, include the crisp, clear Poolside Blonde, which Pearson describes as a marriage of Pilsner and Vienna malts, and a good palate cleanser for beer aficionados who like to sample a lot of variety.

Indian Canyon IPA, Pearson’s personal favorite, was “pure hops, West Coast-style. It’s bitter, dry, and happy.” Another “hoppy” blend was One Eleven Pale Ale, with a deep aroma and a slightly bitter finish from flaked rye. Rounding out the core group was Windy Point Wheat, a great thirst-quencher for hot desert evenings. The Brewer's Reserve Series, made in small batches and sold only in the company’s tap room, included Coffee Porter, mentioned by one audience member as the most memorable brew he’s had in years.

Classically trained chef Roy Choi, who founded KOGI BBQ, a food truck that became a massive Los Angeles hit with its Korean-Mexican tacos and high-energy Twitter marketing, drew the largest crowd of the cooking demos of the day. A happy, affable fellow with two arms inked with tattoos and an unabashed love of his food, his empire now includes the brick and mortar Southern California restaurants Chego, A-Frame and Sunny Spot. Choi’s latest venture, Pot Bar, opened last month at the Line Hotel and is already earning rave reviews from L.A. foodies.

Says Choi during his demo regarding classic Korean barbecue. “It isn’t like American-style, Texas-style barbecue, where the process is long and slow,” he explained. “This is all about a quick marinade and then grilling.”

After whipping up the marinade ingredients — garlic, onions, sesame oil, rice wine, orange juice, soy sauce and species — in a blender, Choi gave away his secret for perfectly marinated meat. “It’s a spiritual transfer of energy while you massage the marinade into the meat.. …All I’m thinking about is how good this is going to taste and how much happiness it will bring you. When I’m done, all you need is this and a bowl of rice.”

Judging from the murmurs of satisfied onlookers lucky enough to sample the finished short ribs, and the long line waiting for autographed copies of his memoir/cookbook, L.A. Son: My Life, My City, My Food, Choi got that energy transfer just right.

Other food stars of the afternoon included Thomas Steferak from Cello’s American Bistro, who demonstrated how to make the perfect limoncello, his restaurant’s signature drink; and celebrity caterer/chef and “entertainologist” Lulu Powers, who signed copies of her book, Lulu Powers Food to Flowers.