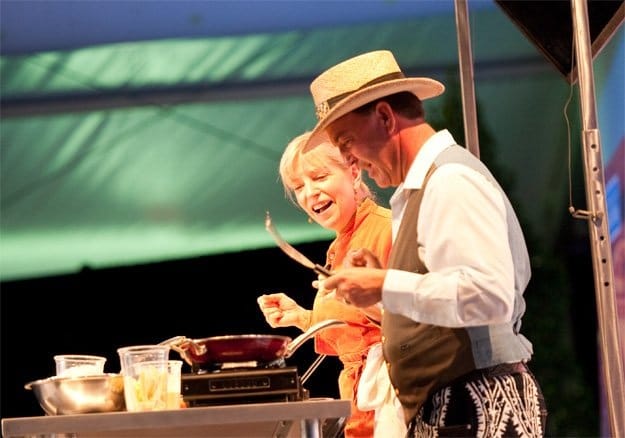 Foodies and wine connoisseurs are going to love this.

The lineup of award-winning celebrity chefs, wine experts, and master vinters has been announced for the Food & Wine Festival Palm Desert 2013, scheduled March 22-24, on Larkspur Lane between El Paseo and Shadow Mountain.

The Food & Wine Festival Palm Desert brings together the brightest and most inspired chefs from throughout the United States for three extraordinary days of culinary events and food and wine tastings under the "Big White Tent". This event is uniquely educational and benefits the Friends of the James Beard Foundation, The Culinary Institute of America's Endowed Scholarship Fund, and Les Dames d'Escoffier.

Chefs slated to appear include:

Luciano Pellegrini – James Beard award winner and executive chef, Valentino, The Venetian
Pellegrini has brought the fresh flavors and elegant Italian cuisine to Valentino in Las Vegas. Under the guidance of Pellegrini, Valentino is the showcase restaurant of the Venetian Hotel and has won two Epicurean Awards from Las Vegas Live Magazine. Pellegrini was nominated for 2003 Best Chef: Southwest by the James Beard Foundation, the only chef in Las Vegas to receive a nomination.

Tanya Holland – Winner "Best Chef in California 2012," author and executive chef/owner of Brown Sugar Kitchen and B-Side BBQ
Holland operates out of Oakland, Calif. She is also the author of “New Soul Cooking: Updating a Cuisine Rich in Flavor and Tradition” and the host and expert on soul food for the "Melting Pot" series on The Food Network and the Cooking Channel. Currently, she's a featured judge on TV One's, "My Momma Throws Down."

Andre Carthen – Kathy Ireland Worldwide Design ambassador
Carthen is featured in Ireland's book “Real Solutions for Busy Moms: Your Guide to Success and Sanity” and Janet Jackson's first book – a NY Times No. 1 best seller, “True You” – where he contributed over 30 recipes for a healthy meal plan. He is often asked to bring his culinary awareness to the media and has appeared on many popular radio and television programs.

Sean Kanan – author, lead character on ABC's "General Hospital"
Kanan is an internationally renowned actor best known for his roles as Deacon Sharpe in the daytime drama "The Bold and the Beautiful" and currently as AJ Quartermaine on "General Hospital". Kanan is also the author of a how-to cookbook for men, “The Modern Gentlemen; Cooking and Entertaining with Sean Kanan”.

Alejandra Schrader – owner, Cucina Cocina and finalist, "MasterChef"
Schrader, a resident of Playa del Rey, Calif., is a top finalist from the latest season of "MasterChef." She owns Cucina Cocina, a private chef business with a fellow "MasterChef" contestant, and continues to do public appearances and cooking demonstrations. Schrader is a food blogger (“Cook Global”) and a strong advocate of health-conscious cooking.

Deborah Scott – executive chef & partner of The Cohn Restaurant Group
As one of San Diego's most renowned celebrity chefs, Scott is known for her diverse tastes and ability to create innovative dishes with an emphasis on presentation. Chef Scott first caught the eye of restaurateurs David and Lesley Cohn in 1995 when her affinity for fusion landed her as the head of Kemo Sabe, the Pacific Rim infused concept formerly housed in Hillcrest. In May 2012, Scott once again wowed patrons with California Modern Cuisine at the Cohn Restaurant Group, Vintana, in Escondido.

March 24: Grand Tasting
Day Two of the festival continues. The Grand Tasting takes place from Noon to 5 p.m. Tickets are $75 each.

To purchase tickets or for a complete list of participating chefs, restaurants, wineries and sponsors, visit www.PalmDesertFoodandWine.com.